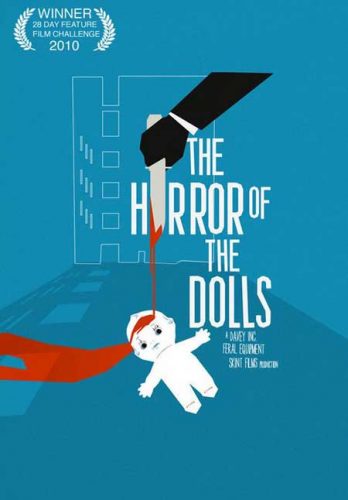 A corporation plans to develop a residential tower block into luxury city apartments. As the residents galvanise, the corporation sends in someone to ‘shake them up’. The Horror of The Dolls features a strong ensemble cast, inter-twined narratives and an iconic piece of London architecture. The narrative is underpinned by the wealth divide, untouchable high-finance, malleable politicians and the resolve of a community under assault. All wrapped in a blood-soaked and stylised horror thriller set against the breath-taking cityscapes of contemporary London.

A man scours the city for bits and pieces of forgotten dolls. Each shot filled in an almost solemn framing that presents as loneliness. It was the beginning to this intriguing new horror film that pulled me in. Beautifully framed shots of the city establish the surroundings as we contemplate what this man’s purpose is. Simply enough he is a doll collector and hobbyist. Frank, the loner, the man upstairs……is no longer with us now. This is where the story begins.

Characters are introduced and then pulled from screen to allow another to take over. One might ask how are all these events and dialog sessions connected? The building, Balfron Tower appears to be the center setting for this drama horror film. And from what I can tell there are alot of somber moments coming from the tenants within.

A group of women gather around discussing their plans for protesting a recent decision to evict the tenants in favor of wealthier occupants.

The killer (as revealed early on) is simply a part of a larger conspiracy that is being prompted by those who want this influx of wealth channeling into the high rise towers of Balfron. All comes together in various pieces as the main characters become central to the story and location. As the local detective tries to figure out a recent homicide, we become acquainted to the characters by their association.

A few things were clear after the completion of “The Horror of the Dolls“.  Shane Davey has a love for cinema often using face fragment shots, perspectives, emotional close ups and placed suggestions that create more of a dramatic puzzle piece. Shot in the UK, often showcasing pieces of London in its backdrop, “The Horror of the Dolls” works more on a “feel” narrative than a straight horror narrative. I’m somewhat reminded of a similar approach with the film “Session 9”.

The synopsis mentioned the film as being atmospheric, which I couldn’t agree more. Though before getting too far into review, the film deserves a couple of stellar shout-outs. The music score and song material was spot on magnificent with Sam Baws helming the brunt of the films soundscape and moody music.

(Note: Nice inclusion of “Open Valve” by The Lea Shores)

What we ultimately end up with is a thriller than embellishes artistic style over shock and awe. The “horror” aspect is so minimalistic that its absence is quickly replaced by anticipation and intensity. The dolls of the film act more as symbolic to the films acts rather than a integral part of the action.

Richard Brinkmann who plays the role of the film’s killer delivers his role with a mix of awkwardness and conviction creating a character than feels right in his shoes despite looking closer to an everyday man. We don’t have to reach too hard to find comfort in how things come together as in the end it all flows neatly from one instance to the other.

For those looking for a stylistic thriller with an awesome soundtrack too boot, then look no further than Davey’s “The Horror of the Dolls”. It’s a film that carves it own path which is simply refreshing.