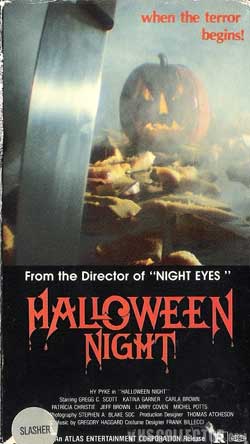 An old man that leads a satanic cult (that enjoys killing people) wants his troubled grandson Tommy to become part of the group on Halloween night.

There are some movies that are so bad they are good, and without a doubt Halloween Night (AKA Hack-O-Lantern) belongs in that group. It is a bizarre movie that is just as fun as it is cheesy and I had a total blast watching it. It has all the necessary ingredients (such as a goofy script, bad acting, a ton of nudity and even a music video that pops up out of nowhere for no obvious reason) to make it a cult classic and I am a little surprised that it doesn’t have a bigger following. In a lot of ways it reminded me a lot of Rock ‘n’ Roll Nightmare and while some people out there won’t like it I really dug it and thought that it was nothing short of awesome for a number of reasons. 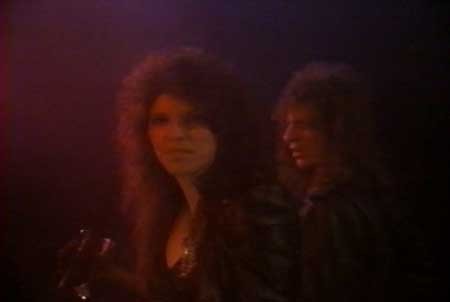 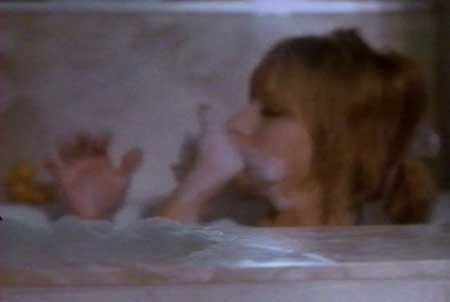 I personally loved the premise. Sure, it’s very similar to a ton of other horror films out there and isn’t very original but things get so convoluted toward the middle when it basically turns into a slasher flick that you can’t help but like it. It starts out as a movie about an old man trying to get his grandson to join the cult that he runs (because he believes that he is the “Chosen One” or something to that effect) and then before you know it there is a masked person running around killing off people connected to said grandson with a pitchfork and other weapons. It works as both a satanic cult movie and a slasher flick and I thought that it was kind of cool that it pretty much switches gears at one point and almost becomes a totally different movie in a sense (even though the masked killer is connected to the cult). I thought that it was a nice touch and just like how Speed Freak Productions’ awesome little indie flick Midnight Skater (which you should really see if you haven’t already done so) goes from being  a slasher to an all out zombie flick it works.  It may be extremely easy to figure out who is behind the mask (I think that the people behind the film legit thought that it was shocking and nobody would figure it out) but I still had fun watching the person go to work all the same. The premise may be a little schizophrenic at times but if you ask me that is one of the things that make the movie itself so entertaining. 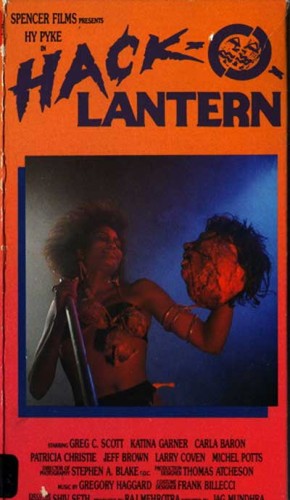 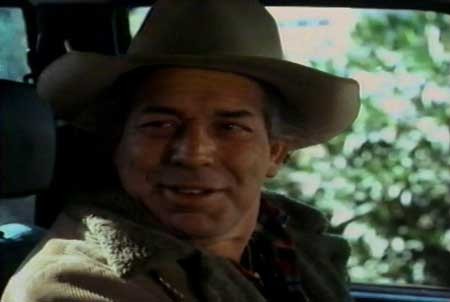 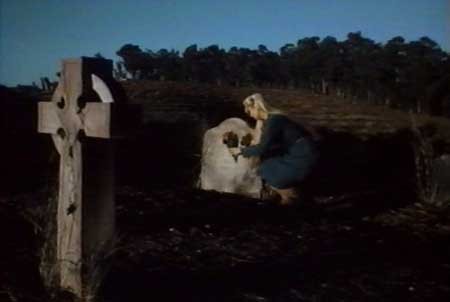 I also loved the characters. Keep in mind that they are all pretty cookie cutter and the biggest majority of them are interchangeable but the few that manage to stand out really do so.  I thought that the evil grandfather character (Hy Pyke) ruled and I enjoyed every minute that he was on screen. In addition to being a goofy-looking fellow with an odd voice he also enjoys flashing the devil horns hand symbol at every opportunity while he speaks and I just couldn’t help but dig him due to how weird the character is. I don’t think he was supposed to be as funny as he is but I know that he made me laugh every time he popped up on camera. I also liked the angry and troubled Tommy as well (played by Gregory Scott Cummins) and even though he is sort of a punk and most viewers won’t like him I thought that he was pretty cool. I also liked his girlfriend Nora (p**n star Jeanna Fine) and even though she unfortunately doesn’t get a whole lot of screen time I thought she was a hoot (thanks mostly to her bad acting) in the few scenes she appeared in (the bit with her describing her Halloween costume was so bad, cheesy, and awesome all at the same time). Though the acting is quite terrible throughout the movie it still didn’t keep me from digging the characters regardless. 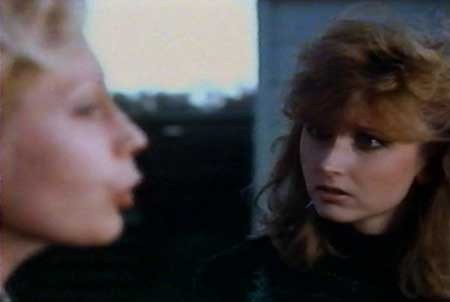 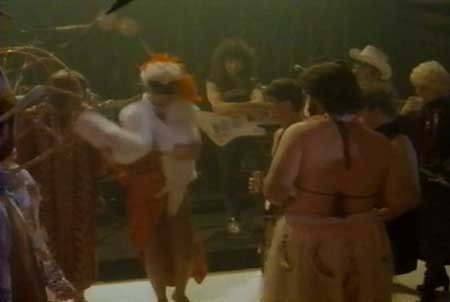 We also get some pretty cool death scenes too.  There aren’t a whole lot of them but what we do get is fun and looks great considering that the filmmakers probably didn’t have a whole lot of money to spend on elaborate special effects. We get a pitchfork to the head, a decapitation via pitchfork, a shovel blade to the top of the head and a pretty cool stabbing that is combined with putting a corset on someone. Most of the death scenes look groovy and are well done for the most part but I do wish that there had been a few more. They aren’t the most creative or original but they are effective and they work for the most part so I guess I really can’t complain. 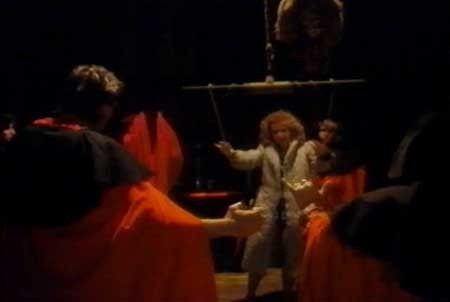 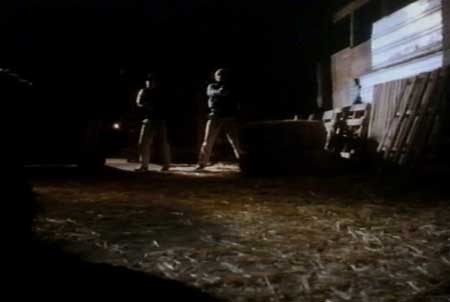 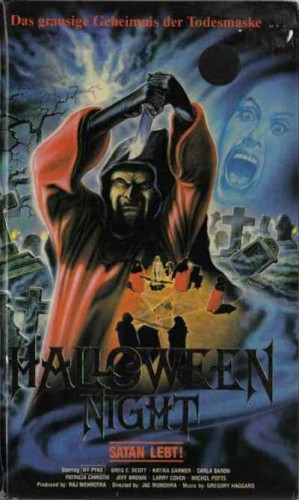 Halloween Night isn’t a good movie by any stretch of the imagination but at the same time it isn’t horrible either. As I said earlier it is so bad that It is good in a lot of ways thanks to several elements (seriously though, what is up with that weird hair band video that goes on a little too long that is just thrown into the mix for no real reason?) and I enjoyed it for what it was. It is unintentionally funny thanks to the bad acting and writing but at the same time that is part of its appeal.  Check it out when you get a chance but make sure that you don’t take it too seriously or you won’t enjoy it (though I honestly don’t think that anyone could really take it seriously although I am pretty sure that the people behind it meant for it to be). When you watch it just be sure to shut off your brain, sit back and relax and I am sure you will dig it as much as I did.