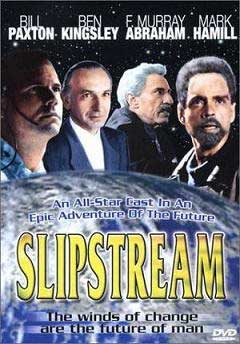 SYNOPSIS:
“In the future, natural disasters (earthquakes, floods) have ravaged the Earth, leaving the Earth as a world where pockets of communities live within canyons whilst a violent wind known as the Slipstream rules the Earth and the only means of transport are airplanes. Matt Owens is a daredevil adventurer who kidnaps Byron, a fugitive wanted for murder, who is the prisoner of law officer Will Tasker so he can claim the bounty for himself. Traveling across the wind swept landscape, Matt and Byron are pursued by Will and his partner Belitski, Matt finds Byron isn’t what he appears to be and learns Byron is android who murdered his creator and they form a friendship as they travel from community to community and encounter pockets of strange societies that lives beyond the slipstream.” (courtesy IMDB)

REVIEW:
This week I offer for your amusement and enlightenment, not so much a motion picture, more like an enigma. How so? Well, I’ll tell you – it’s directed by Steven Lisberger, the same hack who brought us Tron (1982) which, although very pretty, was bad science and worse fiction. Given Tron’s eventual popularity, you’d think it would have launched Mister Lisberger’s film-making career. It didn’t. In a Hollywood career that spans three decades, Mister Lisberger has only ever made four films, the fourth and final nail in his coffin I discuss today. 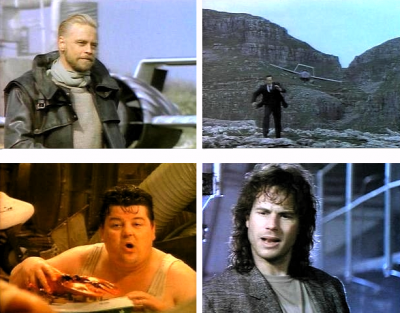 I’m talking about Slipstream (1989), a post-apocalyptic science fiction film which has a remarkable cast featuring Mark Hamill, Bob Peck, Bill Paxton, Robbie Coltrane, the gorgeous Kitty Aldridge and even Oscar winners Ben Kingsley and F. Murray Abraham in small roles. Yet Slipstream is virtually a forgotten film. How can such a recent, well-financed film, featuring a significant cast, just fall off the face of the cinematic earth? Was it really so bad that Lisberger was never allowed to make another movie? 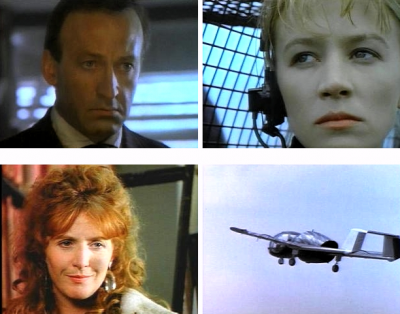 Depending on my critical faculties and level of intoxication, Slipstream is either one of the worst films ever made, or it’s a vastly underrated gem that you need to see twice to see how great it is. The score was composed by maestro Elmer Bernstein, near the end of a brilliant career creating memorable music for films like The Magnificent Seven (1960), To Kill A Mockingbird (1962) and The Great Escape (1963). He was nominated for nine Academy Awards, finally winning an Oscar for Thoroughly Modern Millie (1967). Unfortunately, Slipstream’s score sounds as if Elmer had simply cut-and-pasted entire passages from his previous soundtrack for Ghost Busters (1984).

Like many actors, Bill Paxton started at the bottom and worked his way up…then back down, then round in circles with his underpants on his head. He started as a set dresser on films like Beach Blanket Bingo (1975), moved up to directing and producing the music video for Billy Mumy’s single Fish Heads (1980), then became The Terminator‘s first unfortunate encounter with Los Angeles nightlife in 1984, and played Anthony Michael Hall’s nemesis in Weird Science (1985) before directing something for real, the frightening family film Frailty (2001). With more than seventy films to his credit, I was duty-bound to discuss the one where he sports the worst haircut possible. 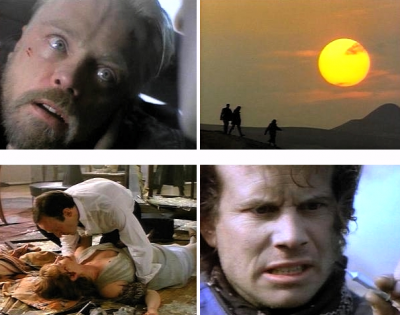 His excellent voice work for a million cartoons notwithstanding, most of Mark Hamill’s movie career has been synonymous with disaster, so he’s much better in Slipstream than could be expected. He doesn’t whine at all, which is a huge relief, and he comes across convincingly as a rather nasty piece of work, which proves he can rise to a challenge considering the lines he’s given. 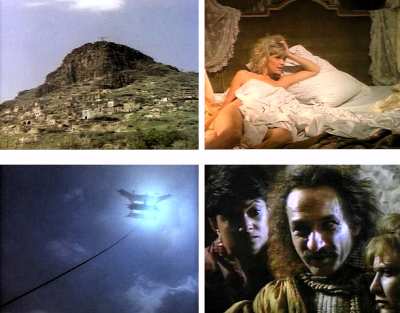 Shakespearean-trained actor Bob Peck plays the runaway messianic android, and does it reasonably well. I always think of him in the 1985 BBC six-parter Edge Of Darkness (recently filmed starring Mel Gibson) and as Dante in A Television Dante opposite Sir John Gielgud as Virgil, but you probably know him best as the super-serious dinosaur hunter Robert Muldoon in Steven Spielberg’s Jurassic Park (1993). Unfortunately, so many British actors in Hollywood find themselves chewed up and spat out by poisonous reptiles. 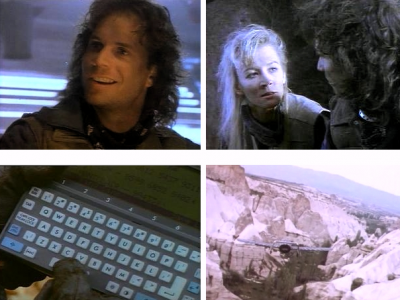 Kitty Aldridge’s acting career started promisingly as part of an all-star cast in Room With A View (1985) and the television series Porterhouse Blue with David Jason, followed by starring roles in American Roulette (1988) and Tyger Tyger Burning Bright (1989). However, Slipstream was the beginning of the painful, lingering end as she moved into the UK crime show circuit with appearances on tedious shows like Heartbeat and Cadfael. Boring went from work to a way of life when she married Mark Knopfler, the only guitarist in the world to play air tennis racket, and retired from acting to become an equally successful author.

So the acting in Slipstream isn’t all that bad, and the bleak backdrops filmed around Turkey are effective. In that sense, it reminds me of Kevin Costner’s The Postman (1997) – great idea, but the script doesn’t work. That’s what happens when a former Little House On The Prairie writer like Tony Kayden attempts science fiction. And amazingly, it was Gary Kurtz, producer of Star Wars IV: A New Hope (1977) and Star Wars V: The Empire Strikes Back (1980), who allowed this to happen. The story revolves around the hunt for an android who committed murder, but almost no effort is made to explain what happened, or what first allowed the robot to defy his Thou-Shalt-Not-Kill programming. All we are told is “He had it coming”, whoever he was. 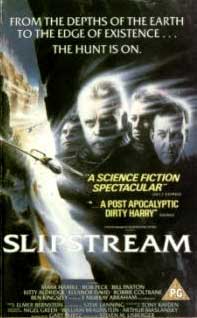 And why does Mr. Hamill hate the Peck-bot so much? He may be a little pompous, but C3PO was far more annoying, much less helpful and couldn’t dance nearly as well. We visit societies that are mere plot devices, seemingly transplanted from films like Beneath The Planet Of The Apes (1970) and Zardoz (1974), but perhaps strangest of all, the Slipstream itself seems to have little, if any, presence in the film, except in the one storm with the wind people. You’d think they’d put more effort into this Slipshod…er, Slipstream idea, seeing as they named the movie after it. And it’s on that rather bleak and windy note I’ll bid you a good night and look forward to your company next week when I have the opportunity to raise the hackles on your goose-bumps with more ambient atmosphere so thick you could cut it with a chainsaw, in yet another pants-filling fright-night for…Horror News! Toodles!