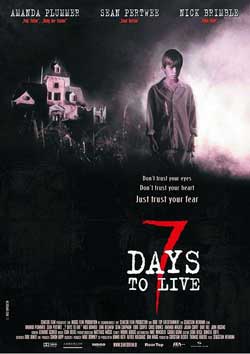 In an old house on the edge of a secluded swampland somewhere in Northern Europe a young woman and her husband try to start a new life after the tragic death of their son. Before they have even settled in, the woman begins receiving eerie messages counting down the days until her death.

7 Days To Live is a 2000 horror film starring Sean Pertwee and Amanda Plummer. It’s about a married couple that moves into the country so the husband can finally do some writing in peace and get his book finished. (Not to be confused with The Shining!) When they get there, trouble ensues in the house!

The movie opens in 1976 with several people investigating a house. They see a woman that appears to have drowned sitting in a chair and another man crouched in the corner. When he wakes up, he starts screaming. Cut to 23 years later, we’re shown a couple driving to the same house. (Sean Pertwee, who plays Martin Shaw and Amanda Plummer, who plays Ellen Shaw.) They move into the house with the help of their friends. During the move, Ellen gets a flashback while listening to the radio. She remembers the day that her son died. (Eddie Cooper, who plays Thomas Shaw.) He’s eating breakfast when a bug flies into his food. He chokes to death. (Shame on the director! The last thing that the viewer wants to see is a child dying a slow death!) Cut back to present day, she snaps out of it and continues about her day. After fights with her husband, she starts seeing images of her dead son. She thinks that she’s going crazy and seeks therapy. She’s also seeing images of numbers. When it began she saw the number seven. Three days later, she sees the number four on her forehead. (Get it? Four, forehead? Oh forget it!) She starts looking into her “hallucinations” and realizes that these numbers resemble the numbers of days that she has to live. The more that she looks into them, the more that her husband gets stressed and starts verbally abusing her.

It gets to be pretty old seeing a woman being abused by her husband in a horror film and just taking it. It’d be nice to see a woman in a film like this tell her husband to just back off. (Even though she did that at the end.) With that being said, this movie is as predictable as they come. We called it when Ellen was playing scrabble that the tiles she would grab would say “three days” and we called it when Martin killed the dog. We’re not trying to give away anything, we’re just proving the point that there are no surprises in this film!

Seven Days to Live was written by Dirk Ahner, who clearly has a love of isolation horror, which may someday be known as a sub genre. Ahner’s main weakness is his use of cliche’s which gives the film a sense of been there, done that. In particular, anyone who has played the PC game Phantasmagoria will find the plot line familiar to the point of adaptation. Now in all fairness, are there any truly original ideas? Art snobs have a penchant for proving otherwise. But it is possible to take an overly familiar story arc and make it feel fresh by breathing a new life into it, The Iron Giant comes to mind. Seven Days to Live sadly doesn’t qualify.

Not that it doesn’t show signs of life. Amanda Plummer and Sean Pertwee are both excellent actors, and their respective talents shine through their material. And the film certainly does have its moments of intensity. In fact, for a story that qualifies as a hack job, it almost holds together, but one too many CGI effects, loose ends and gratuitous cringe moments firmly place the final product into its sub par status.

In a more respectable film one might ask why Ellen Shaw never tries to simply leave the house, but here we already know the answer. She stays because the plot requires it. Similarly, the film’s climax (which may have been based on one of Michael Palin’s monologues in Holy Grail) happens because, well, it’s what the film makers decided. Is there an audience for Seven Days to Live? Perhaps, but not much of one. You’d have to be a die hard fan of haunted house stories to really get anything out of it. Maybe it might even inspire you to think about what hasn’t been done to death in the format. If you’re an aspiring scriptwriter, the haunted house theme is long overdue for a renovation.