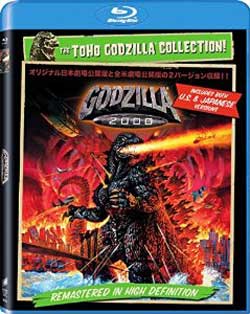 Scientists discover an underwater UFO which has invaded Earth to get a hold of Godzilla’s regenerative powers. Godzilla enters into an urban battle against the UFO, and in the midst of it, the ship uses the monster’s regenerative powers to morph into Orga, a brand new beast.

GODZILLA 2000 happened because Godzilla had been en vogue for over forty years—and still is. It’s one reboot among many . . . THE RETURN OF GODZILLA, GODZILLA 1985, the latest one from earlier this year . . . etc. etc. etc. Being the twenty-third in the series—and actually getting a theatrical run—GODZILLA 2000, like the other reboots, starts fresh, and has nothing to do, plot-wise, with any of the films that came before it.

It’s still monster mayhem to me.

At first, GODZILLA 2000 feels like a return to the basics. Everything, in the beginning, is just as Blue Oyster Cult described it. Godzilla stomps around, wreaking havoc around town. He does, indeed, “pull the spitting high tension wires down.” But then, things takes a turn for the complicated.

There are two groups of scientists. One is a little more established than the other. One has a submarine. One has a Subaru. They’re both studying Godzilla, though, and both become entangled in his “regenerative powers.” One group of scientists—the ones with the submarine—discover a UFO underwater. It turns out the travelers on this UFO are also hip to Godzilla’s “regenerative powers.” As a matter of fact, that’s what brings them to Earth. They plan on taking some of Godzilla’s DNA and implanting it in themselves.

It soon turns into a real brawl between the UFO and Godzilla. They have a hell of a toss up. And for a minute it seems like a draw . . . for a minute. Godzilla’s down. The UFO’s down. But the UFO, still, is able to harvest some of Godzilla’s DNA and “regenerate” itself. It just so happens the ship turns into a monster—Orga, to be exact. Orga has long, sharp claws and can shoot things out of its shoulders. But can it withstand that fire breath of Godzilla???

I may be out of line here. I may be oversimplifying. I’m certainly not trying to offend anyone—especially the six to eleven-year-olds who love these movies. I was once—and still am—one of you. Older now, though, yes.

Anyway, I think you watch Godzilla movies, more or less, for the same reason you watch WRESTLEMANIA. It’s all about the brawl, all about the spectacle. Two beasts. One wins. One doesn’t. Monster versus monster. Don’t call me jabroni.
What do I know, though? My favorite GODZILLA movie is KING KONG VERSUS GODZILLA, with DESTROY ALL MONSTERS in close second. For all intents and purposes they’re wrestling matches. And they’re awesome.

GODZILLA 2000, though, has a lot of talking and a lot of plotting. It’s slow. It’s trying to pass itself off as a real science fiction outing. Sure, the plot’s cool. All that stuff about DNA and seismic technology and ya da ya da ya. That’s great. But we could have all of that addressed in under a half an hour. We could use about twenty percent less chit chat and about twenty percent more of Godzilla and Orga pounding on each other, shooting stuff at each other, while making city planners everywhere cringe.

It doesn’t really even pick up until the last half-hour. Its pacing is off.

But at least the monsters look great in this one. It has higher production value than some of the other ’90’s Godzilla flicks. And Orga is a welcome new addition to the endless barrage of giant creatures (or ‘kaijus’ if you want to be a total dork about it). They look old school and the effects team spares us, mostly, any crappy CGI which was starting to REALLY take over around this time. 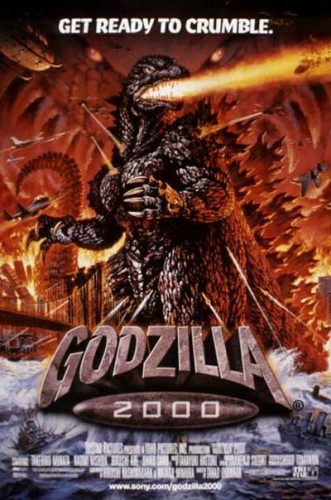 If you want to watch a Godzilla movie, you have thirty-four options. GODZILLA 2000 ranks beneath at least fifteen of those. For the most part it’s well done, but, unfortunately, slow and unsatisfying. HEEEAWWWW.