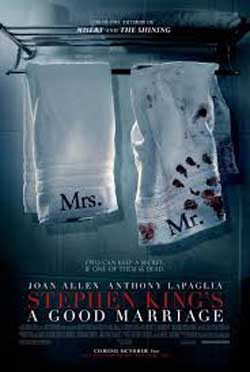 After 25 years of a good marriage, what will Darcy do once she discovers her husband’s sinister secret?

Stephen King. We all know him. He’s given us a litany of great tales like Cujo, Creepshow, etc, etc, etc. When I found that A Good Marriage was written by Mr. King, I must admit that I was a little excited to watch the film. The plot is incredibly simple. The wife, Darcy (Joan Allen), of a seemingly very happy marriage finds out that her husband, Bob (Anthony LaPaglia), is a notorious serial killer known as “Beadie”. Simple, right? Fills you with all kinds of ideas about what could happen, right? Well, throw those thoughts out because none of them happen in A Good Marriage. 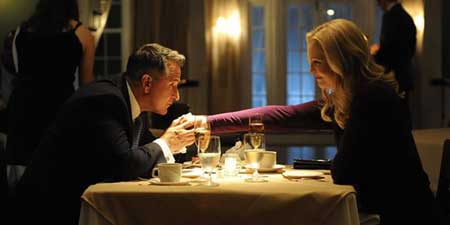 Bob finds out that Darcy knows his secret just as quickly as she finds out the secret. He explains that he has an alter ego named “Beadie” who does the killing on Bob’s antique coin hunting road trips. Bob promises that he won’t let Beadie out again and wants the marriage to continue as grandly as what it has been for the last 25 years. Darcy agrees under obvious duress, and the rest of the two acts involve extremely flat drama of the couple essentially going about their daily lives, with some attempts at thrills and numerous glares and scared looks by Darcy until the very obvious and very matter-of-fact climax. We are then treated to an extremely redundant side story. I’ll get to that later.

Anthony and Joan do a great job with what they have to work with. Anthony’s nonchalant attitude to being caught and continuing his day-to-day life is odd and entertaining to watch. Joan does a great job of being visibly distraught. If this film had lesser actors playing the parts, it would have crumpled into a steaming pile. Joan and Anthony provide the only positive to the film.

Stephen writes the big reveal into the first act. I think this was a fantastic move as it opened up the story to the possibilities of the thrill and suspense of Darcy having this knowledge yet having to live with Bob. Just reading that sentence fills your brain with all sorts of thrilling prospects. Believe me when I say this, your imagination will easily make a more thrilling and thematic story than what takes place in A Good Marriage. This film had so much potential, yet it is squandered by meandering scenes of nothingness.

There is no conflict. “How can that be?!” I hear you ask, “The plot is ripe for conflict”. I know, person saying this, I know, but there isn’t which is insane for a dramatic thriller, yet it’s all passive and internal from Darcy. She doesn’t confront him (until the climax), or try to go to the cops or anything like that. Bob doesn’t even attempt to kill another woman. HE KEEPS HIS PRIOMISE TO HIS WIFE! How the hell do you expect any conflict with characters behaving like this? We’re treated to Bob leering at their hot neighbour, but that’s it. That’s as far as Bob gets to letting Beadie out of the bag again. Oh, we’re also treated to Darcy having a chance to “off” Bob early on in the script, but it too is handled with such little dramaticness (I coin this word), it’s hardly worth mention.

There aren’t even any external conflict angles played. No cops come after Bob. No neighbour stumbles upon the secret or notice the change in Darcy’s behaviour. Nothing, absolutely nothing happens to provide any kind of dramatic thrill.

The little side story I mentioned earlier; I’m still confused as to why it’s even written in. We see a “man” at the beginning of the film and also find him looking at the happy couple and their house during. Now initially I thought this was the serial killer, but we soon learn that he isn’t, so now you’re left wondering who the hell this guy is and what important part or twist he provides. He disappears for most of the film, so you soon forget about him, but when he does return, you learn that he is an investigator of sorts trying to catch Beadie. He figures out Bob is Beadie, but does nothing about it until after the climax which is (for obvious reasons) too late. There is an attempt at some thrills by insinuating that Darcy might be charged, and that Darcy might now kill this investigator, but like the climax before, this is handled quickly, more so than the climax, rendering any attempt at dramatic thrills mute. It serves nothing to the story. Does not progress the story any further, nor does it put Darcy in a different position than what she is before it. It truly is a redundant pile of scenes. I expected more from Mr. King than this.

Those who have read my reviews so far, will probably see a common theme: Conflict. Every great film has conflict, wheter it be a comedy, horror, drama or period piece. There is always conflict manifested in some form or another. This is what makes a story interesting. No one wants to see people go about things like they would themselves. That’s boring. That’s mundane. That’s everyday life. Conflict is the core to any good movie and there is simply not enough in A Good Marriage, nowhere nearly enough considering the fantastic premise Stephen provides.

I give this 2 out of 5 antique coins