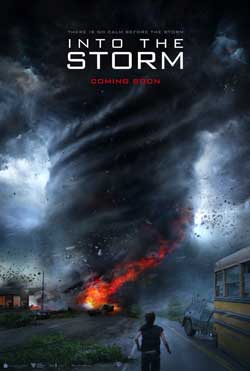 Storm trackers, thrill-seekers, and everyday townspeople document an unprecedented onslaught of tornadoes touching down in the town of Silverton.

The Black Saint has a tradition that has come to bite me in the ass in recent years. What I’ve done since I was 16 years old is see whatever movie opens on my birthday. This has led me to see some delightful films that I never would’ve thought to watch otherwise (The Spongebob Squarepants Movie rocked my world…seriously), and some not so delightful films that I’d otherwise completely ignore (I seriously detest all things Hobbit). In an effort to bring my son (He turned 13 today, hence he’s now the Young Black Saint) into my tradition, we decided to go see whatever big film opened on his special day and we had a choice of 2 – Teenage Mutant Ninja Turtles (He threatened to pulverize me if I tried to take him to that one) or Into The Storm. And as you can see from the title above, we chose the latter. Did he choose wisely? 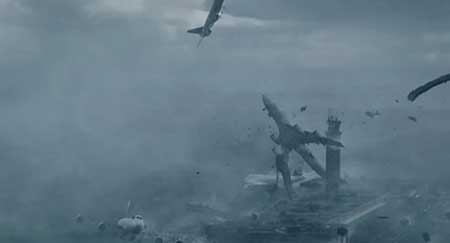 Into The Storm tells the tale of a convergence of tornadoes/hurricanes that crash into the small town of Silverton, Oklahoma and the team of storm chasers that are trying to document the disaster while trying to keep themselves from getting wiped out by what they’re chasing. Concurrently, it tells the story of widowed vice principal Gary Fuller (Richard Armitage) as he (Along with his younger son, Trey (Nathan Kress), struggles to find his teenage son, Donnie (Max Deacon), who’s gone missing just as the storm hits. It’s not a very complicated story and this is a good thing because the script (By John Swetnam) does very little to make us care about any of the characters, but the action scenes are pretty exciting and do just enough to make this a relatively painless 90 minutes.

None of Swetnam’s characters make much of an impact, but that’s not because the actors aren’t trying. Sarah Wayne Callies (The Walking Dead) tries especially hard to give her character, Allison, a bit of gravitas as she tries to convince the townspeople that the coming storm is going to be the worst storm ever but more often than not her character seems content to be either perched in front of a monitor or screaming at the top of her lungs. It’s too bad too because the film is sorely lacking in any female roles and she might’ve had more of an impact if she was a bit more hands on. This isn’t to say that the male roles are much better though as all of them are fairly stereotypical of what you’d find in any number of disaster movies. All of the actors perform their roles dutifully but you pretty much know what’s going to happen to each & every one of them as soon as they appear on screen. Richard Armitage (The Hobbit: The Desolation Of Smaug) gives the best performance among the lot of males but since he looks like what would happen if Hugh Jackman & Michael Fassbender had a child together, you already know that he’s gonna find his son & come out of the whole mess with barely a scratch on him. He’s way too good looking to die. 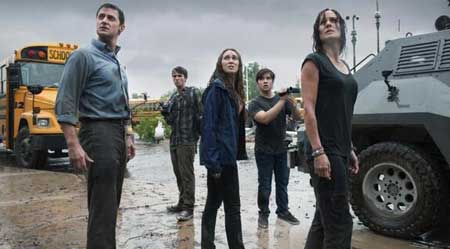 Director Steven Quale (Final Destination 5), does the best he can with a very hackneyed script and keeps the proceedings moving along nicely. The film is very well paced and Quale delivers the prerequisite blasts of CGI devastation at the proper intervals. The CGI here is very detailed at times and extremely convincing throughout and once the storms start coming, the film gets fairly intense & involving. So much so that I just kept thinking about how well certain scenes here would translate into thrill rides at Universal Studios (The Sewer Drain scene especially). One big mistake Quale makes though is trying to make the film part of the “Found Footage” genre. It begins with Trey & Donnie filming first person “Time Capsule” footage for the upcoming high school graduation ceremony and for a little while, it seems that the film is going to remain this way but not very long after, Quale abandons the idea and the film settles into a more traditional approach. Stylistically, this approach is very confusing, so why bother if you’re not gonna commit to what you started? 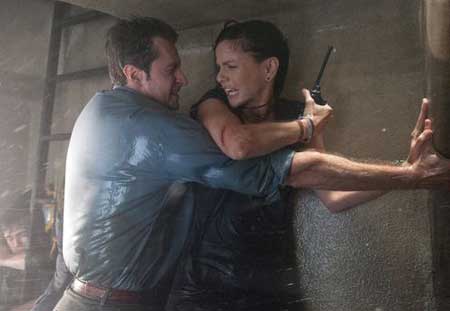 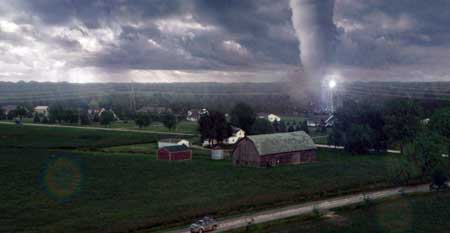 In addition, the script makes the stultifying decision to include a pair of redneck, thrill seeking, wanna be daredevils named Donk (Kyle Davis) & Reevis (Jon Reep). I suppose they represent the comic relief element of the film but all they did was annoy the f*ck outta me & fact that Swetnam’s script keeps them around when everything is said and done (In a ridiculously stupid epilogue), tells me that he needs someone to rein him in just a bit. Donk and Reevis might just be the most annoying characters I’ve seen in a film since Jar Jar Binks shuck & jived himself into infamy in Star Wars: Episode One – The Phantom Menace. And they’re only in the film for about 10 minutes total, so that’s really saying something. 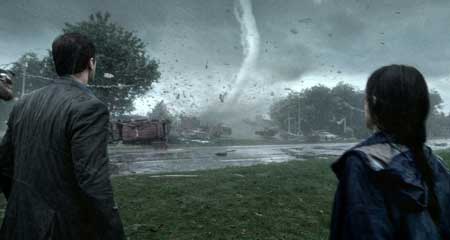 All in all, Into The Storm delivers all of the thrills you want from a standard disaster film. Its got a dumb script that hits on all of the tropes of the genre, cookie cutter characters whose ultimate fates are immediately discernible and excellent special effects to keep its audience awake. It does its job well enough for me to recommend it, but I’m pretty sure that most, if not all of you will forget 90% of it by the time you get home from seeing it.

Now about those damned ninja turtles… 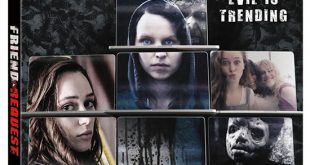