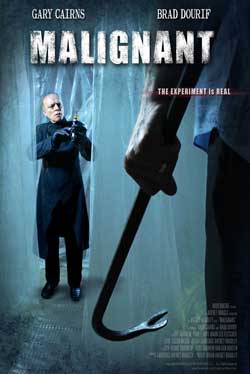 Alex (Gary Cairns) had a wonderful wife. He lost her to cancer, though, and has become hopelessly depressed. He’s turned to drinking, and finds himself blacked out drunk most nights of the week. One night, while at his favorite bar, he gets a text message from an unknown number that reads: “Don’t drink it.” He doesn’t pay it much heed, continuing to drown his sorrows in liquor. That same night, while totally blotto, he meets a mysterious man who says he can help him with his alcoholism. That man is played by Brad Dourif and—as Dourif’s characters frequently are—he is 100% creepy. But what business would he have driving a shiny, black Jeep Compass? That’s not a creepy car. 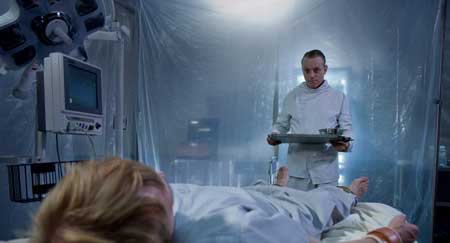 Anyway, Alex wakes up with a cut on his chest and stitches. It’s not long before he finds that something metal has been surgically implanted in him . . . and he sees a video of himself committing a murder. Therein lies the treatment this strange man he met the night before provides: Alex drinks and this man forces him to kill. That metal thing in his body is a chip, and it’s used for mind control. Well . . . Alex can’t stop drinking and, thus, can’t stop killing people.
Some treatment. 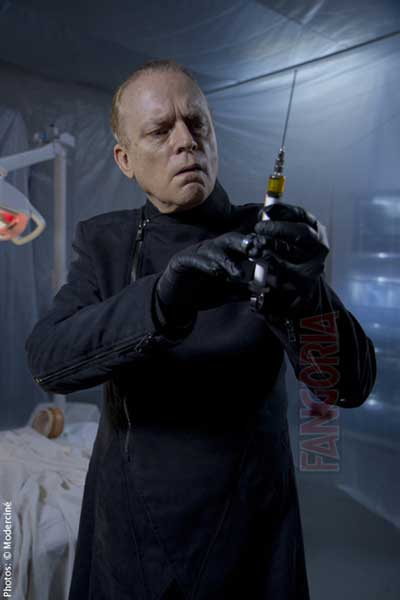 Brad Dourif steals the show in this one. He uses his voice, facial expressions, everything to execute a monstrous and slithery villain. Truly, he is of the Karloff/Lugosi/Carradine caliber—an old school ghoul of the highest degree. The horror buffs, however, will want a lot more screen time with him. We don’t even see his face until the last half hour. Before that, we only hear his voice—over phones and through the darkness. He comes from a long line of . . . experimental . . . scientists. His character is far more interesting than Alex’s, and, unfortunately, gets the short end of the stick from the screenplay. Everything that makes him tick is jumbled together at the end of the film. Why would a screenplay shy away from a Dourif character rich with genre conventions? That’s, like, why we watch these movies, or something, right?

Instead, though, the story focuses on and follows Alex. Gary Cairns plays hopeless, pitiful, and tragic well, but, with a better script, his character’s condition could have been a lot more interesting. The ways in which his sorrows are conveyed are too ‘bim, bam, boom.’ He’s sitting there next to his wife’s hospital bed. He’s having flashbacks of all the cliche couples’ vacations they took together. Then . . . he’s drinking liquor. That’s it? That’s how his alcoholism came about? No kidding? He’s such a bad alcoholic that when he drinks he kills people and he still can’t stop. Yet, his alcoholism is so superficially portrayed that it’s in no way believable. 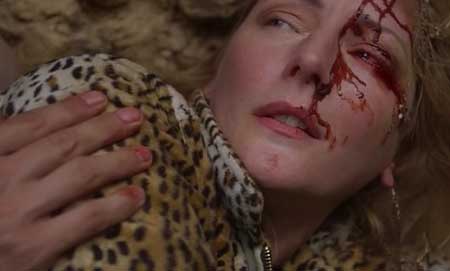 Moreover, Alex’s drinking problem is absolutely integral to the story. You’d think it’d be made out to be a little more thematic. It feels instead like subtext. But Gary Cairns is still sympathetic; his victimhood goes too far for the character not to be. Make no mistake, this character suffers. You think you’re having a rough day. Well, you’re not pulling some microchip out of your flesh with a pocket knife, are you? Ouch. You’re not dodging syringes from a lobotomy fetishist.

With a few more screenplay revisions, this could have been a pretty cool movie.

Everything else, besides a fully developed, intriguing story treatment, is there—good, atmospheric camerawork, competent acting, grotesque, but sparing makeup effects, a creepy soundtrack. But because the screenplay neglects so much, MALIGNANT comes off mediocre, and any suspense or emotional impact suffers for it. Let’s not forget some of the utterly ridiculous dialogue, too, like Alex’s exchange with his bartender about whether or not killing while hypnotized would render innocence in a court of law. Puh-lease.

Overall, MALIGNANT’s last half hour is its saving grace. The lead up to that conclusion, though, is too watered down and oversimplified.