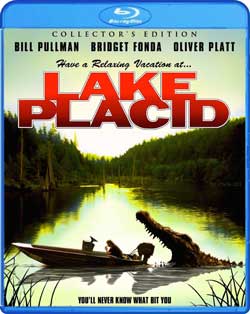 Horror-Comedy about a man-eating crocodile loose in the lake.

Holy crocodile, Shout Factory is on a role with re-digitizing old horror gems that focus on critters and reptiles. How about 1 very large one that doesn’t mind chomping anything that strolls too close to the lake. Yes, its a bluray reboot of “Lake Placid” one of the great water horror films making its way once again to new fans and buyers. Who would of thought that Placid would go on to become a small franchise with several films to follow?

But the real question is…what is it that makes this particular crocodile film so special over all the others? For starters, one real viewing will answer that question quite easily. It’s got the star power of actors Bridget Fonda, Bill Pullman and Oliver Platt. The directing, editing and cinematography is top notch and on top of it all its got charm, appeal and humor rolled up into one. While still a horror film, there is plenty of decapitations and limb chomping to keep you on edge…but, it does it all in a way that the new Piranha films do. It does it with savvy style.

Directed by Steve Miner “Lake Placid” is a small budget premise filmed on a big budget. The thing that struck me the most here was a backing score that could have easily been placed inside a Jurassic Park film. The music and backing score is quite outstanding creating a professional intense experience elevating the action of the film the whole way thru (It should be noted that this aspect is part of the reason this film plays better than some of its similar themed releases).

The humor sometimes is sick, which is much of the fun in experiencing this stand out crocodile film. Massive and mean our villain here is 30 feet long and not afraid to take down a grizzly bear in one big swoop. Steve Miner was indeed onto something that would have a long shelf life for years to come.

Getting to the story, Bridget Fonda plays Kelly Scott, a paleontologist who has been assigned to investigate a case in Maine. The locals have reported a few deaths that resulted in the victims being “chomped” in half. The evidence is a tooth which is found in one of these victims. As the wildlife and game head begins his investigation, Kelly manages to worm her way into the outing to tag along for the ride. Soon the team, joined by Jack Wells (Bill Pullman) and Sheriff Hank Keough, are knee deep in what appears to be a lake that is home to a gigantic crocodile.

Not convinced, the team is joined an eccentric expert Hector Cyr, who has spent his entire life studying these beasts for their reverence. Hector easily manages to annoy Sheriff Hank Keough (Brendan Gleeson) to the point where the sheriff wouldn’t mind feeding Hector to the croc himself. Though after a week of tracking, hunting and discovering this gigantic reptile, they learn of a few other points of interest that suggest “why” the beast is so large. The scenes around this are iconic for “Lake Placid” and often seen as a remembered still from the 80’s.

The movie is alot of fun to watch while still keeping a high level of intensity from start to finish. The croc, which is part live prop and part CGI, works for the film in a way that doesn’t distract delivering a more than adequate underwater villain through out the film.

These are the kinds of films that we tend to never forget while also offering years of re-watching without loss of appeal. “Lake Placid” is one of the forerunners in “giant reptile films” for good reason. The recent release on bluray makes for a great high definition viewing thanks to the efforts of Shout Factory. You’ll want to pick this one up (with a few of the company’s other releases) just to see the croc come to life in big screen.

Lake Placid (1999) would serve to inspire countless other crocodile, alligator movies that would range from great to really poor. Despite that fact, arrived quite a few good films of interest that deserve merit on their own.

I love “Lake Placid”, it’s a damn good time and great entertainment to boot! It also stands up under repeat viewings

“Lake Placid” is now available on bluray per Shout Factory