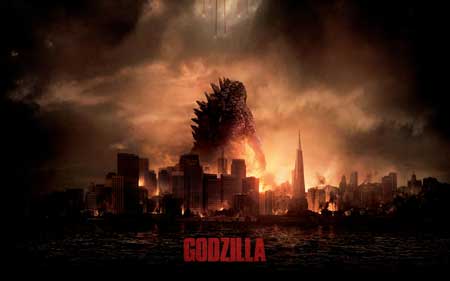 The world’s most famous monster is pitted against malevolent creatures who, bolstered by humanity’s scientific arrogance, threaten our very existence.

It’s indeed a daunting task for anyone besides the good folks at Toho Studios to want to take on a new Godzilla film, especially after the abomination that Roland Emmerich’s 1998 version turned out to be. It’s even more daunting when the only other film you’ve directed was a no budget potboiler that was released 4 years ago to some critical acclaim but no box office success at all. But director Gareth Edwards (Monsters [2010]) somehow finagled himself into position to direct the new mega budgeted Godzilla film and although the visuals pretty much set a new standard for all future giant monster films to strive for, the story is fairly mundane & there’s one big issue that keeps me from giving it too much praise. 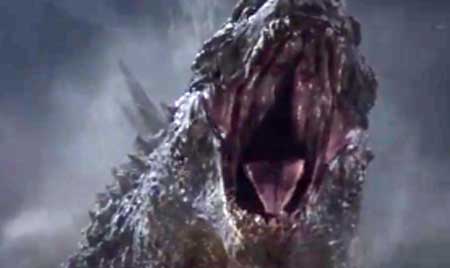 The story begins in 1999 where we find Dr’s Ichiro Serizawa (Ken Watanabe) & Vivienne Graham (Sally Hawkins) coming upon some enormous fossils underneath an excavation site. The bones are way too large to be any animal known to man and confound the two scientists. Meanwhile in Japan, nuclear engineer Joe Brody (Bryan Cranston) realizes that the tremors that have been rumbling underneath the facility where he works aren’t the minor earthquake that everyone else thinks they are, they’re actually signalling the birth of…something really big. And because the last of those tremors is strong enough to cause a meltdown & kill his wife Sandra (Juliette Binoche), he’s sure that something else is responsible. Cut to 15 years later and poor Joe is still in Japan, an avowed conspiracy theorist still seeking to find out what exactly caused the meltdown & why the Japanese government is trying to cover it all up. 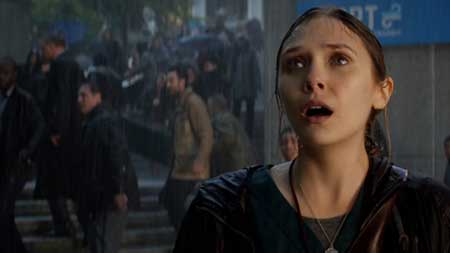 Joe’s son, Ford (Aaron Taylor-Johnson) has grown up a lot in the ensuing 15 years as well, he’s now a naval bomb specialist with a beautiful wife, Elle (Elizabeth Olson) & a young son of his own. When we first meet him, he’s just returned back to San Francisco to be with his family after a lengthy tour and just as he’s all settled in, he receives a phone call from Japan explaining that his dad has just been arrested and he has to fly to Japan to bail him out. Once released, Joe convinces his son that there is indeed something fishy going on and the two of them sneak into the quarantine zone (Where the meltdown originally took place) to seek out the definitive truth Joe’s been searching for. But they end up getting a lot more than they bargained for.

There’s a whole lot more than that going on but it’s a bit too dense for me to recount here. Suffice it to say that all of the exposition doesn’t necessarily warrant all of the screen time alotted to it because in the end, most of it has no real conclusion, save for the introduction of two insect like creatures called “MUTO” (Mutated Unknown Terrestrial Organisms) that apparently want nothing more than to bump uglies and make mini muto’s. The female (who has wings) & the male (who’s a lot larger and has arms that look a lot like he’s walking with a cane in each claw) both emerge in different areas and commence to wipe out entire cities as they fervently make their way towards each other for that long awaited hook up. Dr. Serizawa figures out that the sudden emergence of Godzilla isn’t happenstance, it turns out that he’s sort of an “Enforcer” for good old mother nature! A creature whose job it is to take out creatures that threaten the earth. 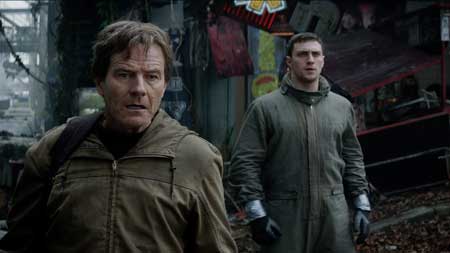 You’ll note that I said “Threaten the earth“. Mankind’s problem is that Godzilla has no care for humanity, he’s there to protect the planet, not the people of the planet. So if a few trillion dollars worth of collateral damage & untold human deaths take place as he’s doing his job – it ain’t his problem. That’s where Admiral William Stenz (David Strathairn) comes in with a idea to detonate a nuclear device right on top of the three creatures as they battle. Although it’s been established that the MUTO’s feed on radiation, he’s thinking that the sheer force of the blast will obliterate all 3 of the colossal combatants.

There’s so much that Godzilla does right that I hate to bemoan what it does wrong. Let’s start with what’s great about it: It’s a true visual marvel filled with images that will sear themselves into your psyche. The cinematography (By Seamus McGarvey) is so tight, sharp & crisp that it’s near impossible to detect where the (Incredible) CGI effects start & end from scene to scene. Trust me when I tell you that you will believe that Godzilla exists, the effect work is that good. The score (By Alexandre Desplat) is both somber & epic and it sweeps across the length of the film unobtrusively yet it ingratiates itself into each & every frame at the same time, it’s one of the best scores I’ve heard in years. The nature of the script doesn’t demand too much of the actors and none of them take pains to make a big deal out of their roles save for Cranston, who cries & screams for the duration of his screen time. Although the trailers make Cranston out to be the star of the film, it’s Taylor-Johnson who gets the lion’s share of screen time. 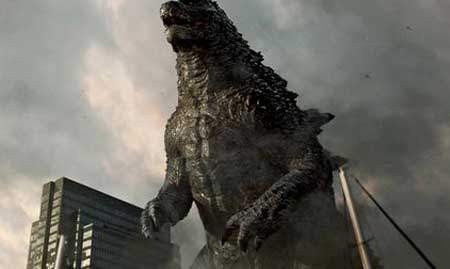 Now you’d think that if the film is called Godzilla then you’re gonna get some Godzilla, wouldn’t you? Well…think again because we don’t even get a glimpse of the big guy till nearly 45 minutes have passed by and the first few shots of him are basically just his dorsal fin or his silhouette as he glides under water. We see a whole lot more of the Muto’s which is fine I guess but the movie isn’t called MUTO is it? And the male Muto looked a lot like the Cloverfield creature to me so there was a bit of “Been there, done that” as I sat in the theater. Amazingly enough, I don’t think there was much more than 15-18 minutes of Godzilla in the film (Although I’m probably off by a few minutes) so essentially he’s been relegated to a secondary character in his own film – and that ain’t right. The new design afforded Godzilla is effectively fierce though and he certainly looks like he’s more than a tad ticked off which works for the character. We only get to see him utilize his atomic breath twice but the revamped effect is spectacular and the manner in which he uses it to dispatch the male Muto was especially unique & violent (Think “Soul Kiss“). There are a few scenes in which the creatures just appear out of nowhere, with nary a sound heard by anyone before they actually look up and see the monsters. While this is patently ridiculous (They’re like Kaiju-Ninjas), it’s one of the tropes of Kaiju films that just can’t be dismissed as silly anymore. 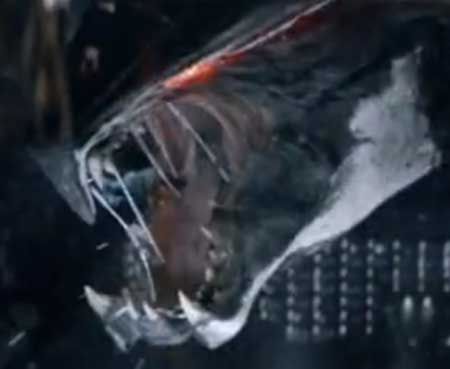 The film takes pains to evoke memories of the Tsunami that hit Thailand 10 yrs ago and the devastation of the first (& only) nuclear bomb ever dropped on a populace and these images still have the power to make you wince just a bit. Edwards knows how to manipulate an audience and he’s shown that the jump from directing no budget films to mega budget ones is something that he was born to do. Godzilla might feel slow at times but it really isn’t. The script (By Max Borenstein) just wants the story & the people in it to take precedence over the monsters & takes its time to do just that. But that’s where it lost me, it’s called Godzilla for a reason dammit! Bring on the carnage!! Although I didn’t much like last year’s Pacific Rim, at least it featured some hellacious battles pretty much from the onset. There just isn’t enough carnage here to make this a successful Kaiju film for me. 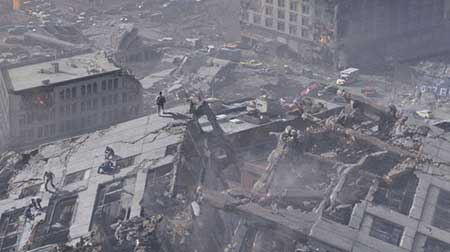 But its not a bad film – just not a especially good one. What it does well, it does really well but in the end the lack of Godzilla took the bloom off of the rose for me. But it’s still a decent enough waste of 2 hours and if there’s a sequel planned I hope the film makers decide that maybe having the big guy take a bigger role in a film that’s named after him is a good idea.