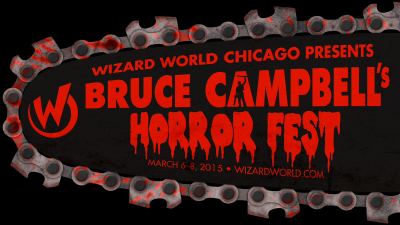 ‘The Evil Dead,’ ‘Army of Darkness’ Star To Emcee Full Three-Day Event Celebrating Everything Horror; Many Other Genre Stars, Directors, Writers To Attend; New Content To Be Available On Wizard World’s Cinedigm Channel

ROSEMONT, Ill., March 24, 2014 – It will be a Wizard World show like fans have never seen when the one and only Bruce Campbell emcees an entire weekend of horror at Wizard World Chicago Presents: Bruce Campbell’s Horror Fest, March 6-8, 2015, at the Donald E. Stephens Convention Center in Rosemont, Ill. The Army of Darkness and The Evil Dead star puts on what many fans agree is the best programming panel at most Wizard World shows; now fans can get even more of one of the best pure entertainers on the circuit, signing, posing for photos and moderating multiple panels all weekend long.

With the focus on horror, fans can expect to see some of their favorite genre stars, directors and writers from great television shows, movies, graphic novels and comics. It’s a celebration of all things horror, and Bruce will be inviting some of the many superstars he’s worked with over the years. Special guest announcements to follow as they are secured.

Additionally, content from Wizard World Chicago Presents: Bruce Campbell’s Horror Fest will be available as part of the recently announced Wizard World channel with Cinedigm (NASDAQ: CIDM), the largest distributor of non-theatrical content in the U.S., upon its launch.

“We are thrilled to add a second Chicago event at a venue where we have achieved much success over the years,” says John Macaluso, Wizard World CEO. “And teaming up with the great Bruce Campbell to put on the ultimate horror event really gives the fans a reason to come out to the Donald E. Stephens Center twice a year!”

“This is really a dream come true for me,” says Campbell. “I have always wanted to be part of a great organization and run a top-notch horror convention that sees my vision of what it could be. The fans have supported me all these years, so I look forward to giving back and providing a unique experience.”