A full year after making it’s debut at SUNDANCE the Jeremy Loverling written and directed flick IN FEAR is finally going to make its way to the fans. ANCHOR BAY is handling the release which will include the always fabulous “limited theatrical release” on March 7th followed immediately on March 11th with a VOD and DVD roll out.

The film stars ain De Caestecker, Alice Englert and Allen Leech and tells the tale of a couple who find themselves lost in a backwoods maze of roads only to be terrorized by an unseen “thing” that seems hell bent on not letting them make it through the night.

Here’s a short trailer to give you a taste of what’s in store:

This is the synopsis that ANCHOR BAY is using to promote the release:

In Fear is a tense psychological horror about a young couple’s fight to make it through the night. Home invasion but in a car. In real-time. Tom (De Caestecker) and Lucy (Englert) are trapped in a maze of country roads with only their vehicle for protection, terrorized by an unseen tormentor hell-bent on exploiting their worst fears. Driving, lost and tormented in the night, primal fears of the dark and the unknown give way to fear that you have let the evil in, or that it is already there. 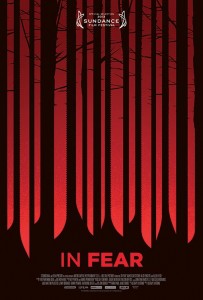