Jessica Cameron Is Throwing A Pajama Party, And You’re Invited

The only thing I can think of that would be better than watching a kick ass blood fest of a horror film is watching said film with a bunch of hot chicks in their pajamas. Seems director/scream queen Jessica Cameron and I think a lot a like.

Got a press release outlining a very special screening of Jessica Cameron’s TRUTH OR DARE, sure it’s in Hollywood but if you can somehow find a way to get there, it sounds to awesome to miss.

Here are the details from the press release:

Are you ready for a pajama party and a bloody good horror movie? Scream queen Jessica Cameron’s award-winning horror film Truth or Dare is screening at the Shockfest Film Festival in Hollywood, CA, on Friday, January 10th, at 11:55 pm. The event will be held at Raleigh Studios, across from Paramount, located at 5300 Melrose Ave., Hollywood, CA 90038.

The red carpet for the event starts at 10pm, and it is going to be a pajama party so all guests are asked to arrive in the appropriate attire. Truth or Dare vomit bags will be provided to all in attendance. Director Cameron will be inviting guests to play a game of truth or dare with prizes such as limited edition t-shirts, pre-orders of the film and signed photos of the cast.

Cameron’s vicious feature, which she co-wrote and produced with Jonathan Higgins, has won nine awards, three of which are for Best Feature. The January event will mark the eighth year of the festival. Cameron and Higgins will be in attendance to present the film and host a Q&A after the screening along with actors Ryan Kiser and Devanny Pinn.

The plot revolves around six friends who find internet stardom when they make “truth or dare” videos online. It is all fun and games until their number one fan decides he wants to play. Nothing is what it seems, and everyone has something to hide.

Haven’t seen the film yet but i hear great things.

If you want to know more about the project I suggest their FACEBOOK page which is loaded with all kinds of great photos and info. 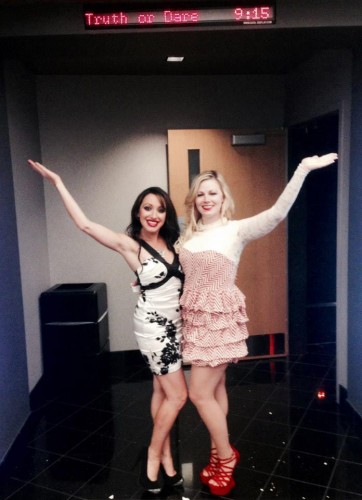