Giveaway: Tickets To The Cage Of Death

Did you know… HorrorNews.net has an alliance with Combat Zone Wrestling? It only makes sense as CZW wrestling has been a vender at Monster Mania Con for years now. They are big time horror fans , and they obviously have a blood lust. 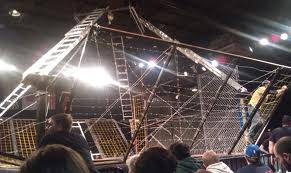 Combat Zone Wrestling presents the most feared match in all of professional wrestling. The Construction of Destruction…the Innovation of Devastation…Cage of Death XV at the Flyers Skate Zone on Dec 14th!

Horrornews.net will be there !!!!

CZW tickets available online or pick them up at the door before the show.
** For those who purchase their tickets online, they will gain early access for a FREE Q&A with stars of CZW at 4 pm!

Can’t be here in person? This event will also be broadcast LIVE on iPPV at CZWiPPV.com. Here’s the COD XV lineup…