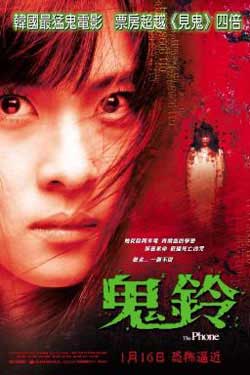 Soon after Ji-won gets a new cell phone, her friend’s young daughter, Yeong-ju, puts it to her ear and immediately begins screaming in terror. When other strange things start happening in connection with the phone, Ji-Won does some investigating and discovers that of the people before her who had the same number, almost all of them died suddenly under unusual circumstances. As Yeong-ju’s behavior becomes increasingly alarming, Ji-won digs deeper into the circumstances surrounding the disappearance of the number’s first owner, a high school girl named Jin-hie.

Before anything else I gotta mention that this movie is under the banner of DIMENSION EXTREME DVD but before the movie begins it says Toilet films! Now that’s some funny stuff! Fortunately PHONE is not bad enough to be chunked into the toilet.

PHONE begins like soooo many other Asian and non Asian ghost revenge supernatural horror films with a young lady in a elevator receiving a sinister phone call. Not that most ghost films start off in a elevator but they all begin with a isolated character being assaulted by forces from beyond before the real story begins. It even has THAT look. You know the look. Not the way great films like RINGU , JU – ON , or THE PULSE that have a almost 80’s horror , grimy look to them , PHONE is more akin to THE PREMONITION and NIGHTMARE DETECTIVE with a slicker look that make it not even look like a horror film.

One of the things about it that makes it stick out a little is the fact that it is a Korean made film. K – Horror I guess you could say. Heh – heh…..
It begins with our lead character Ji – Won who is a investigative reporter who has just done a story on a high school sex scandal involving older men and young female students. But ever since the article broke she began receiving threatening phone calls from one of the men she exposed for being a perv. So she decided to take a vacation and stays at the summer home of her sister. Now some of the reviews I have read say it is her friend but I got the idea it was her sis but in either case she stays at her sister, Ho – Jung’s summer home to get away from the stress of her current predicament. 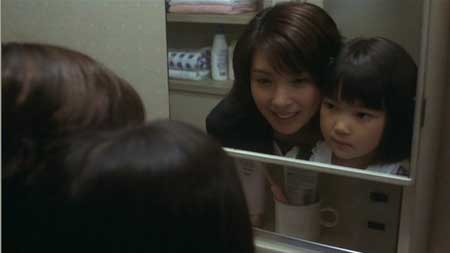 Right before and right after she goes to the summer home though are two disturbing scenes that have nothing to do with the ghostly trappings of PHONE. While working on her computer Ji – Won receives two very ugly and very nasty altered photos of herself. One is of her mutilated torso and the other is of her severed head with a knife stabbed into her forehead, dripping blood. They are disturbing images, and look wicked sick , but Ji – Won is not scared by these images but the abusive phone calls continue and she decides to get a new cell. But with a new phone the long distance phone calls from the other side begin with even higher charges! 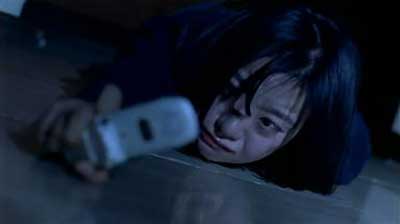 okay I still haven’t seen ONE MISSED CALL , sue me okay , so I can only imagine the similarities between that movie and phone but I do see parallels between PHONE and JU – ON. So Ji – Won thinks things are okay with a new phone but one day while visiting a art museum with Ho – Jung and Ho – Jungs daughter Young – Ju , Ji – Wons cell rings and Young – Ju answers it and receives the spectral message. The little girl listens to whatever is said on the other end and starts screaming uncontrollably at the top of her lungs while her mother and aunt try to calm her down to no avail. At first I thought the little girl was only severely traumatized by what she heard but that is not the case. And I gotta handle it to this little actress, Eun Seo – Woo!

Turns out she gets possessed by the dark spirit haunting the phone and she plays it so well , so angry and adult that for me she becomes one of the more interesting parts of the film and compelled me to keep watching!

But I must admit PHONE is a pretty cliched affair with a plotline you’ve seen in many other horror/supernatural/suspense films Asian and non Asian alike as well in television shows like TALES FROM THE DARKSIDE , MONSTERS , FREDDY’S NIGHTMARES , and probably every soap opera ever made. You know the spurned lover out for revenge but in PHONE this lover is coming back from beyond the grave.

Besides the great performance by the little girl another thing I liked about PHONE is all the pretty ladies! The actress in the elevator in the first scene is very cute and Ji – Won and Ho – Jung are very pretty! In fact the actress who plays Ho – Jung is prettier than the lead actress and she is in her mid to late thirties but looks like she’s in her mid twenties but both of them have that delicate porcelain doll quality. Almost a classic beauty and they make up a good portion of my enjoyment of this movie when I was getting bored by the well worn themes of ghosts and possession.

But I will not give away the whole film to you and whatever viewing enjoyment you might get out of PHONE if you just have to watch it. It does have it’s good points. For starters it looks great! It’s a well made film and the special efx are great for whatever budget they had and what they were trying to accomplish which is going for the jolt scare but most of all it is the actors that make this film watchable. The actress playing Ho – Jung is very good and her character changes drastically as the film progresses towards the finale but it is Eun Seo – Woo who gives the best performance and gives us the more frightening scenes of the film. 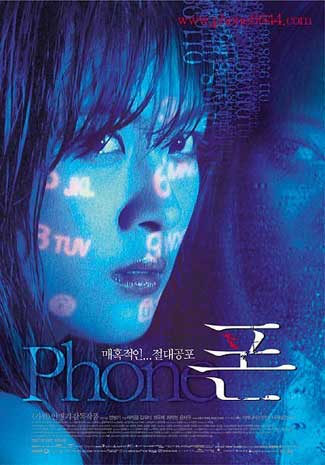 Now here’s what I did not like about PHONE. There is no gore or brutal violence….except for one particular scene that involves the daughter but I am not going to tell you what happens , no way. I’ve already read a few reviews of PHONE that give the whole film away and even though I didn’t love PHONE if you want to see it you should experience it without it being totally ruined by me. Another thing ; there are way too many flashback sequences that interrupt the flow of the film and are , to me anyway , sometimes confusing.

Then there’s the predictability of the story. I try not to second guess a movie when I see it but even I saw a million miles away when the ghost in the phone inadvertently saves ji – Won from the pedophile trying to kill her. And the ending. It has a twist ending that you will see uncapping way before it happens and it’s not a surprise or one you haven’t seen before , the ghostly spectre getting it’s revenge on the living person that wronged them but when it happens we don’t even get to see it!!! It just fades to black and that was very frustrating.

Overall I will say I did not like PHONE but it is not a terrible movie , but there are terrible movies that are awesome like PLAN 9 FROM OUTER SPACE and ASTRO ZOMBIES but PHONE seemed to be aiming at a certain target audience trying to be good without taking any chances and that is sort of a failure at film making. So check it out if you simply can’t get enough Asian ghost horror but there are plenty of other Asian ghost movies and plenty of Korean films I would recommend before PHONE. 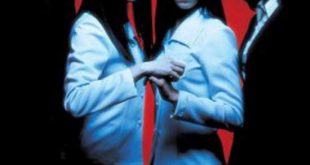 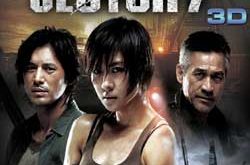 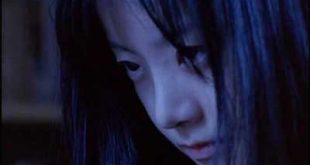