Land of Shadow and Substance: People Are Alike All Over

In the opening scene, the two stars peer through a wire mesh fence at their space vehicle parked on the launch pad. The ending scene is eerily similar as only one finds himself looking through and holding bars yet again, but in a much different scenario and this odd irony may go unrealized to most viewers.

Based on the Paul Ferman story, Brothers Beyond the Void, first seen in the March 1952 issue of Fantastic Adventures, the tale originally had only one traveler, Marcusson, who finds short, four and a half foot tall Martians that are neither ugly nor beautiful. Serling’s version brought change; Martians at average human height and a quite beautiful Susan Oliver playing the part of Teenya, a compassionate Martian who takes flight in the final scene, unable to accept what her species has did.

Marcusson (Paul Comi) is an optimistic astronaut who believes that since people were created by God, they have to be similar everywhere. Sam Conrad (Roddy McDowall), a biologist who isn’t afraid to voice his deep fear of their pending Mars trip, takes solace in Marcusson’s philosophy as they stand together gazing at their rocket on the night prior to boarding. Although fearful, Conrad does understand mankind’s need for his expertise. After all, there may just be life on Mars. 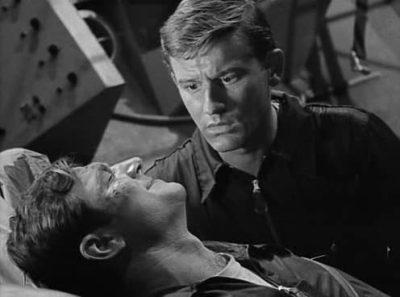 The launch goes as expected, as does the journey, but during the landing something goes terribly wrong and they crash. Marcusson is killed, leaving a frightened Conrad completely isolated and alone.

A banging against the outside of the ship is heard, terrifying Conrad even more, and only after realizing he can’t survive bottled up inside the ship forever, he takes a chance and opens the ship’s door to brave the unknown. What he finds are friendly Martians that appear quite human-like. However, what he doesn’t know is that they can telepathically communicate.

The following morning the Martians come to fetch Conrad again and present him with a house built to appear just like those on planet Earth. Perplexed and hesitant, but growing more and more at ease; Conrad gratefully follows through a tour of the home before being left alone to settle in.

Amazed at the uncanny similarities, he begins to accept fate, browses a bit more, and decides to venture out. Gripping the front doorknob, he finds the door locked and calls out to the Martians. There is no reply and he goes to the curtains, expecting to find a window. But, much to his dismay there are none.

Panic takes hold as a wall on the home rises to reveal vertical steel bars and a host of gawking and gasping Martians. Initially confused, Conrad sees a sign posted in the ground within his reach and he retrieves it. He flips the sign around and reads and it all becomes apparent that, much to his horror, he is now an exhibit in a Martian zoo.

Gripping the bars, he makes eye contact with Teenya before looking away into the sky and screaming out – “Marcusson, you were right – people are alike everywhere.”

Land of Shadow and Substance: People Are Alike All Over