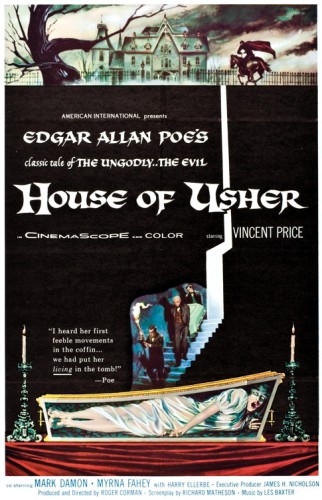 SYNOPSIS:
“After a long journey, Philip arrives at the Usher mansion seeking his loved one, Madeline. Upon arriving, however, he discovers that Madeline and her brother Roderick Usher have been afflicted with a mysterious malady: Roderick’s senses have become painfully acute, while Madeline has become catatonic. That evening, Roderick tells his guest of an old Usher family curse: any time there has been more than one Usher child, all of the siblings have gone insane and died horrible deaths. As the days wear on, the effects of the curse reach their terrifying climax.” (courtesy IMDB)

REVIEW:
When horror cinema was temporarily abandoned in the late fifties, it was mostly low-budget black-and-white science fiction films about monsters. At the beginning of the sixties the budgets were lower than ever, but everything else was changing. As monsters flew out the window, doomed neurotics were plodding hauntedly through the door. The day of the Gothic Costume Drama had arrived, and its prophet was a brisk young fellow named Roger Corman. Screenwriter Robert Towne once told me that Roger’s greatest strength was his lack of patience. Yet, in regards to the making of his acclaimed Edgar Allan Poe adaptation, The Masque Of The Red Death (1964), Roger exercised a great deal of patience – four year’s worth of patience – and made several other Poe adaptations while waiting. 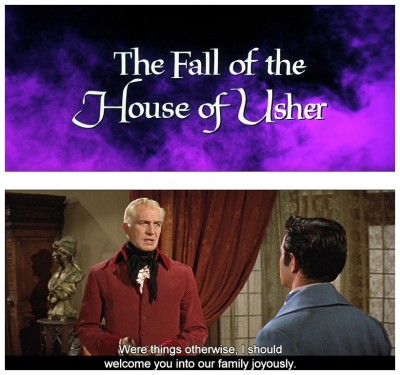 It began back in 1959 when Roger and producers Jim Nicholson and Sam Arkoff decided that unless they upgraded their product, American International Pictures was headed for financial ruin. So, instead of spending $200,000 making two movies, they’d spend $300,000 on a single feature – a third of the budget going to its star Vincent Price – and hope they could make it look good enough to demand a percentage of the box-office. There were two main factors behind their decision – the recent British invasion of elegant Hammer horrors, and the quality of American television had improved a great deal, with a lot of familiar faces popping up and the coming of colour broadcasting. It was a sink-or-swim proposition and they put everything they had into The Fall Of The House Of Usher (1960).

The Gothic has always been a familiar element in fantastic cinema from the very beginning but, oddly enough, no matter how medieval the plots, most so-called Gothic dramas had been set more-or-less in contemporary times. Then Roger, with his writer Richard Matheson, discovered Edgar Allan Poe. Like the subsequent Poe adaptations, The Fall Of The House Of Usher was designed by Daniel Haller (who later became a fair director himself) and photographed by Floyd Crosby in Cinemascope and Pathecolor, a process which emphasised the blue-green end of the spectrum while underplaying the red-yellow end, thus giving the film a ghastly patina, echoing the morbid lifestyle of the rambling old mansion’s decadent occupants. Roger produced and directed it in a mere fifteen days, released it, and Nicholson and Arkoff held their breath.

Philip Winthrop (Mark Damon) arrives at the brooding Usher mansion to collect his fiancee Madeline Usher (Myrna Fahey) who, he is told, is ill. Her brother Roderick (Vincent Price) is against the marriage, and warns Winthrop that a history of madness runs in the Usher family. But after a few hours of listening to Roderick plead with him to leave without Madeline, Winthrop is convinced that the only hope for her sanity is to get her out of the house. On the morning of their departure, Winthrop finds Madeline dead on her bed. At least he thinks she’s dead. It’s only after she’s been buried that he learns from the butler Bristol (Harry Ellerbe) that she suffers from cataleptic fits. 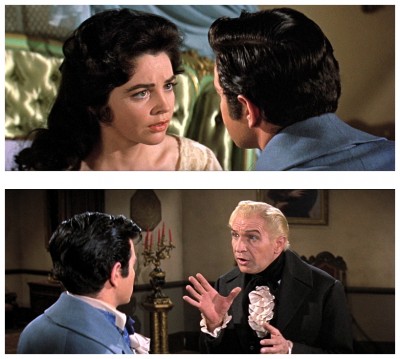 Winthrop confronts Roderick with the possibility that he’s buried his sister alive and, after being badgered, Roderick confesses that he did just that: “But she’s dead now.” Winthrop races to the crypt and finds a trail of blood leading away from the coffin, and then he finds Madeline. She really is crazy now and she tries to strangle Winthrop then goes after Roderick. During the struggle a violent storm shakes the house, causing a split in a fissure. The house catches fire and begins to sink. Winthrop watches helplessly as a chunk of the roof, engulfed in flames, falls on Madeline and Roderick. Bristol drags Winthrop to safety then races back into the inferno to die. As Winthrop walks away, the house sinks into the mire. 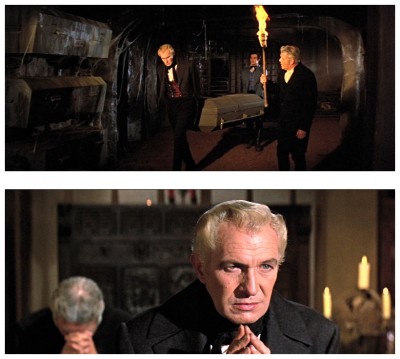 The Fall Of The House Of Usher was declared a hit, earning more than a million dollars in less than seven months. If it hadn’t, American International Pictures would have been out of business. It was a hit with the critics too. The New York Tribune called it, “A restoration of finesse and craftsmanship to the genre of the dread,” and the Los Angeles Examiner said Roger deserved an accolade for achieving the impossible, “A film that kids will love that never once insults adult intelligence.” The movie played for many months, as opposed to AIP’s usual hit-and-run drive-in operation. Since Roger’s adaptations of Poe are psychological horror films, most of them are set in decaying, oppressive, life-consuming mansions that represents the minds of their unfortunate inhabitants. Most of Roger’s Poe films have a subtext in which a place – usually an ancient house, cob-webbed and rotting – comes to stand for all the traps of old memories, sins, regrets. The camera that wanders down the gloomy corridors is effectively tracking through Vincent Price’s un-aired mind.

Charles Griffith, who had written Roger’s best films – A Bucket Of Blood (1959), The Little Shop Of Horrors (1960) and Creature From The Haunted Sea (1961) – was very disappointed that Roger didn’t ask him to write The Fall Of The House Of Usher. It seemed to him that he was being given the short end of the stick, but American International Pictures simply wanted to put up the best possible front, which is why they insisted on hiring a well-known writer. Because there are only four people in the film, screenwriter Richard Matheson was stuck with the problem of writing a horror movie in which nothing could happen to anyone until the climax. It was for this reason he inserted several filler scenes that are there strictly for atmosphere: a dream sequence, a trip to the crypt, a look at the family gallery, etc. To take up even more time, his characters use about ten lines of dialogue when only two would suffice. 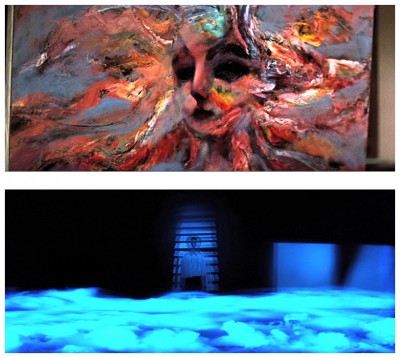 In his Poe films, Roger abandoned his usual speedy cutting and vigour for a hypnotic, rather ponderous style which seems to float lethargically through nightmares that are not so much terrifying as excruciatingly claustrophobic. Yet audiences loved them, and a number of follow-ups were produced, including The Pit And The Pendulum (1961), The Premature Burial (1962), Tales Of Terror (1962), The Raven (1963), The Haunted Palace (1963), The Terror (1963), The Tomb Of Ligeia (1964) and eventually The Masque Of The Red Death (1964), the film Roger Corman wanted to make in the first place, four years before. It’s on that timely note that I’ll now bid you a fond farewell and look forward to your company next week when I have the opportunity to freeze the blood in your veins with more sickening horror to make your stomach turn and your flesh crawl in yet another fear-filled fang-fest for…Horror News! Toodles! 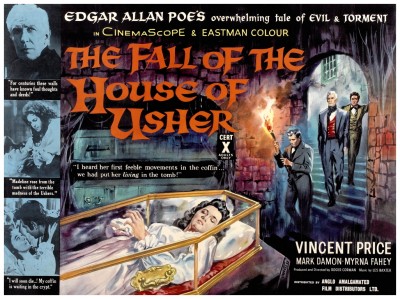