THIS IS THE END Blu-ray Specs!!!

One of our favorite films this year, THIS IS THE END will be hitting home video on Oct. 1st and I can’t wait!! As always, the press release reveals all so read on my friend, read on…

The end may be near but the party’s just beginning when the hit comedy THIS IS THE END comes to Blu-ray™ combo pack, DVD and Digital on Oct. 1 from Sony Pictures Home Entertainment. James Franco (127 Hours, Pineapple Express), Jonah Hill (Moneyball, Superbad), Seth Rogen (Knocked Up, Pineapple Express), Jay Baruchel (Knocked Up, Tropic Thunder), Danny McBride (TV’s “Eastbound & Down,” Due Date), and Craig Robinson (TV’s “The Office,” Hot Tub Time Machine) star in this apocalyptically hilarious movie about six friends trapped in James Franco’s house as the world around them comes to an end. Written and directed by Seth Rogen and Evan Goldberg, creators of Pineapple Express and Superbad, THIS IS THE END is filled with raunchy and irreverent humor, shocking special effects, as well as surprise cameos, with appearances by Rihanna (Battleship), Michael Cera (Juno) and Emma Watson (Harry Potter series).

The Blu-ray combo pack features more than 90 minutes of exclusive and outrageous bonus features, including deleted scenes, a gag reel and a hilarious “Line-O-Rama” blooper reel. Also included is “Jay & Seth vs. The Apocalypse,” the original short film that inspired the movie, along with five additional featurettes exploring the visual effects in the film, showing how the party scene at James Franco’s house came together, and taking viewers behind the scenes with cast as they reflect on the unique acting process of playing versions of themselves.

Both the Blu-ray and DVD include commentary with Seth Rogen and Evan Goldberg, as well as the “Directing Your Friends” featurette, in which Seth and Evan discuss what it’s like to make a film with their friends and members of the cast reflect on their experiences on set. The Blu-ray and DVD also include marketing outtakes, a cast featurette, redband sizzle trailer and four additional confessionals — Aziz Haunts Craig, James & Danny Confessional, Jonah Confessional, and Seth & Jay Confessional.

Synopsis: THIS IS THE END follows six friends trapped in a house after a series of strange and catastrophic events devastate Los Angeles. As the world unravels outside, dwindling supplies and cabin fever threaten to tear apart the friendships inside. Eventually, they are forced to leave the house, facing their fate and the true meaning of friendship and redemption.

THIS IS THE END is based on the short film “Jay and Seth vs. The Apocalypse,” written and directed by Jason Stone (upcoming The Calling). It was produced by Seth Rogen, Evan Goldberg and James Weaver (The Guilt Trip, 50/50) and co-produced by Jay Baruchel and Matthew Leonetti Jr. (The Mechanic, Trespass). Executive producers are Nathan Kahane (50/50, Juno), Nicole Brown (50/50, Whip It), Jason Stone, Barbara A. Hall (Hanna, Milk), Ariel Shaffir (50/50, Goon) and Kyle Hunter (50/50, Goon).

It has a run time of approximately 107 minutes and has been rated R for crude and sexual content throughout, brief graphic nudity, pervasive language, drug use and some violence.

Blu-ray Exclusive Bonus Material:
· Deleted Scenes
· This is the Gag Reel
· Line-O-Ramas Blooper Reel — Back-to-back shots of the actors’ different delivery of certain lines from the film, including:
o Sleepover
o Cum Battle
o We Don’t Know You Man!
· Six featurettes:
o Meta-Apocalypse – The cast discusses the unique acting challenges of playing versions of themselves.
o Let’s Get Technical – A look at the visual effects & technical aspects of the film.
o Party Time – A behind-the-scenes look at the making of the party scene at James Franco’s house, including the celebrity friends who showed up.
o The Cannibal King – Channing Tatum & Danny McBride take us on set to show us how it really was filming their scenes together.
o The Making of “The Making of Pineapple Express 2”– A behind-the-scenes look at the cast making the sequel to Pineapple Express.
o “Jay & Seth vs. The Apocalypse – The Original Short” – The original short that inspired the film. 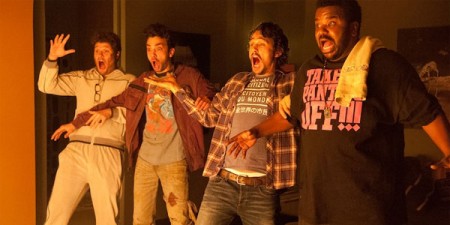 Tags blu-ray This is the End