“The Pit Wants What It Wants” In This Clip From JUGFACE

You certainly can’t say that JUGFACE isn’t original. In one of the wildest story ideas I have read in a while JUGFACE looks to be a pretty creepy ride. The film did wonderfully on the festival circuit and is currently available via VOD and has itself a limited theatrical run starting Aug. 9th so things have been pretty busy for this little film that could.

If you’ve been on the fence about paying for a VOD viewing, take a look at this little clip and I think you’ll be hitting that order button on your remote:

Here’s the official word from the Press Release:

Modernciné announced that JUG FACE, the tense horror-thriller written and directed by Chad Crawford Kinkle, will have a national theatrical rollout on August 9th through its domestic distribution arm Modern Distributors. The film was produced by Andrew van den Houten (Funeral Kings, The Woman) and Robert Tonino (Home Movie, Ghoul) for Modernciné and stars Lauren Ashley Carter (The Woman), Sean Bridgers (“Deadwood”), Sean Young (Blade Runner), Larry Fessenden (I Sell the Dead), and Daniel Manche (The Girl Next Door). JUG FACE was executive produced by Lucky McKee, Arrien Schiltkamp, and Loren Semmens. The film’s pre-theatrical VOD roll-out in the U.S. began on July 8th and is slated for a VOD release, day and date with theatrical, on August 9th.

JUG FACE tells the story of a pregnant teen trying to escape a backwoods community when she discovers that she may be sacrificed to a mysterious pit. The entity in the pit requires a life for keeping the community safe. The face of the person to be sacrificed is crafted onto a ceramic jug. When ignored, the entity unleashes an evil onto the community. Now no one is safe as tragedy befalls each member one by one, and they soon realize that the pit wants what it wants.

“Chad Crawford Kinkle’s uniquely original Southern Gothic tale is filled with amazing performances and beautiful cinematography. We believed in the project from the beginning and are pleased to be supporting its domestic release through Modern Distributors, our new-founded distribution and film sales arm. Jug Face is exactly the kind of director-driven filmmaking we will continue to get behind,” said van den Houten.

JUG FACE won the Slamdance Grand Prize Screenwriting Award in 2011 and debuted as a Special Screening selection at this year’s festival.

The pit has spoken. Dawai, the potter of a backwoods community, has crafted a face on a ceramic jug of the person that the pit wants sacrificed. Ada, pregnant with her brother’s child, has seen her face on the jug and hides it in the woods, determined to save the life of her unborn. If she does not sacrifice herself, however, the creature from the pit will kill everyone in the village until she does. 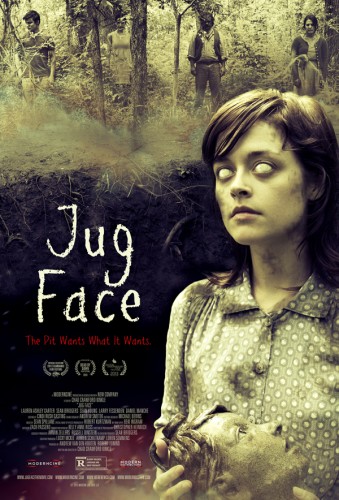