SCREAM FACTORY just sent out word on what we can look forward to on their Collector’s Edition Blu-ray of John Carpenter’s PRINCE OF DARKNESS and as we’ve come to expect, they are awesome.

Here’s the press release that unveils all:

Get ready for the ultimate presentation of the heart-pounding supernatural thriller by heralded master of horror director John Carpenter (Halloween, The Fog, They Live) as the long-awaited PRINCE OF DARKNESS Collector’s Edition Blu-ray™ and DVD invade home entertainment shelves everywhere on SEPTEMBER 24 from SCREAM FACTORY. Available for the first time on Blu-ray, this collector’s edition is brimming with insightful extras, including new interviews with John Carpenter and Alice Cooper, special audio commentary and much more!

Donald Pleasence (Halloween), Jameson Parker (Simon & Simon), Lisa Blount (Needful Things), rock icon Alice Cooper, Victor Wong and Dennis Dun (both from Carpenter’s Big Trouble In Little China) star in this gripping suspense thriller on the terrifying battle between mankind and the ultimate evil. A group of graduate students and scientists uncover an ancient canister in an abandoned church. When they open it, they inadvertently unleash a strange liquid and an evil force on all of humanity. As the liquid turns their co-workers into zombies, the remaining members realize they have released the most unspeakable horror of them all. Terror mounts as the team must fight to save the world from a devilish fury that has been contained for over seven million years. 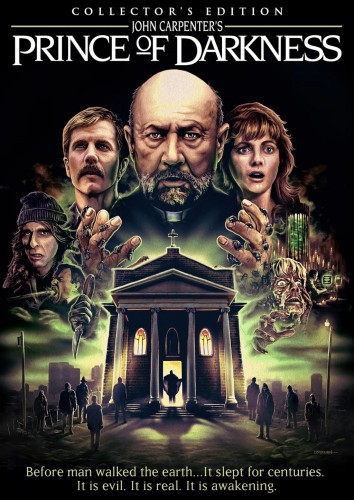