Home | Two New Featurettes Take Us To THE WORLD’S END

Two New Featurettes Take Us To THE WORLD’S END

Without a doubt SHAUN OF THE DEAD is to this day one of the best zombie movies to grace our screens in recent memory. Loved it. Not much of a fan of HOT FUZZ but it has its fans and who am I to judge. The point of all this is that the three folks that joined together and gave us those first two are back. Simon Pegg, Nick Frost and Edgar Wright have pooled their talents once again and this time they are taking us to THE WORLD’S END. Now I have to admit, the synopsis of this one doesn’t read like much but I have like everything thing I have seen so far so let put this one in the “intrigued” category of up coming releases.

The powers that be sent along a couple of new featurettes to pump up the fan base, check em out and see what you think:

Director Edgar Wright and actors Simon Pegg and Nick Frost reunite for a third film following the successes “Shaun of the Dead” (2004) and “Hot Fuzz” (2007). In “The World’s End,” 20 years after attempting an epic pub crawl, five childhood friends reunite when one of them becomes hellbent on trying the drinking marathon again. They are convinced to stage an encore by Gary King (Simon Pegg), a 40-year-old man trapped at the cigarette end of his teens, who drags his reluctant pals to their hometown and once again attempts to reach the fabled pub – The World’s End. As they attempt to reconcile the past and present, they realize the real struggle is for the future, not just theirs but humankind’s. Reaching The World’s End is the least of their worries.

August 23rd brings this one to a theater near you. 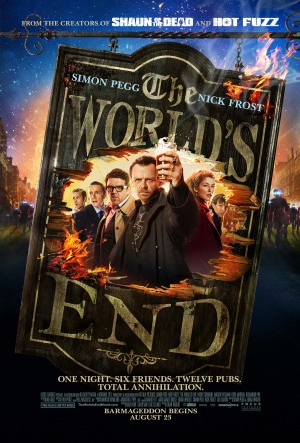