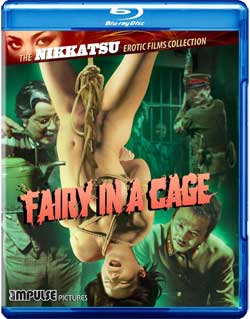 During World War II, the tyrannical Judge Murayama uses his military power to imprison and torture innocent people. Suspected of helping an anti-government movement, the lovely Namiji Kikushima is captured, along with a local kabuki actor. Helpless and unable to escape, the two are subjected to a grueling series of tortures including rope bondage and physical assault. As the Judge and his evil assistant Kayo revel in their perverse fetishes, a new military recruit they have hired named Taoka may be the key to the prisoners’ freedom. He loves Namiji and will do whatever he can to help her, even if it means betrayal to organize an escape.

Between 1971 and 1988, Japanese movie studio Nikkatsu churned out hundreds of softcore pink films, a series known as the Nikkatsu Roman P**no films. Considered by fans and critics alike to be one of the very best is 1977’s Fairy In A Cage, directed by Koyu Ohara, a regular in the pink film business. Ohara’s work speaks for itself; perusing his list of forty plus films, one will find titles such as Sex Phobia, Female Convict 101: Sucks, White Rose Campus: Then Everybody Gets Raped, and the title that seems to sum it all up so well, True Story of Woman Condemned Continues.

Fairy In A Cage is set in Japan during World War II and deals with the interrogation of suspected traitors. The film opens with Lt. Nishizaki and Judge Murayama (Minoru Okochi) discussing the release of a female prisoner while overlooking a party. Murayama mentions he will miss her, but is sure they can find a replacement. He points out a specific woman, Mrs. Kikushima (Naomi Tani, a legend in the pink film industry), and asks the lieutenant to get her.

What we soon learn is that the judge is abusing his position of power to hold innocent women against their will in the guise of questioning them regarding treason and other crimes against the state. As the credits roll, we see a naked and bound woman whipped, burned with a candle in very sensitive areas, given an enema, and given rope burns in the same sensitive areas previously mentioned, all at the hands of the judge. Meanwhile, his partner in crime, Nishizaki, begins training a new recruit, Keita Taoka (Kazuo Satake), who may not quite be cut out for the sadism he will soon be a part of. 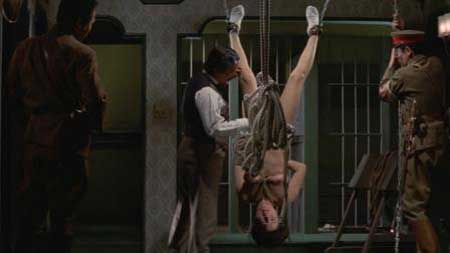 One thing leads to another, and soon trumped up charges are brought against Mrs. Kikushima, putting her in the torturous hands of Murayama. She, along with her actor friend Sennosuke Inoue (played by Hirokazu Inoue, who can be seen twenty-five years later in Ju-On: The Grudge), are tied up and placed in adjacent holding cells where they will await the many cruel acts that are in store.

Before we go any further, it needs to be stated that the plot is fairly unimportant. Some have said that Fairy In A Cage makes a social and political statement about the government’s power and intrusion into the lives of innocent citizens. Some have said the story represents the struggle of the working class, and the sexual torture depicted is symbolic of how the state treats the workers. While there are many exploitation films that do have a strong underlying social message, in this case I disagree, and rather see the story as a long string that, once followed, brings us to each new scene of torture, bondage, and humiliation. This is not a moral judgment, of course, but rather an honest view of an S&M exploitation film from the 1970’s.

The torture and humiliation is prevalent throughout the film. Uncomfortable objects are inserted into a woman’s genitals, as is steaming hot water, and nearly everyone is tied up at some point (including Judge Murayama’s wife, who tells him she is jealous of the tortured girls and wants him to tie her up and treat her like a whore). In one scene, a heavily tied up Kikushima is forced to urinate into a bottomless toilet while the rest of the group waits underneath with a shiny, over-sized gravy boat to catch every last drop. Meanwhile, lest we forget about Inoue, he is “tortured” by the judge’s wife, who performs oral sex on him, then has sex with him. Multiple times. 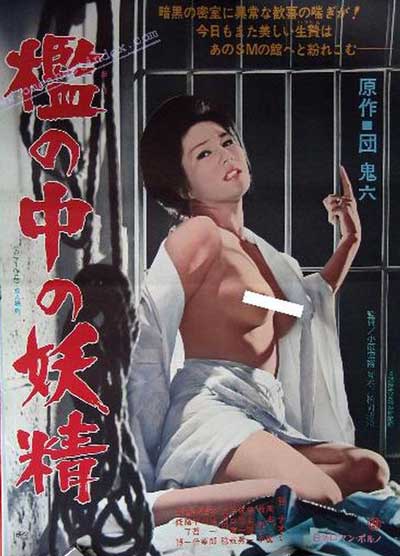 There are so many things that could be said about this movie and its portrayal of gender and sexuality, but for now I will leave those to the viewer’s discretion and focus on the technical aspects. Fairy In A Cage is well-filmed, with good costumes and set pieces to show the time period (1940’s Japan). The acting is fine; the audience really believes the main actress is uncomfortable when she is tied up and rubbed back and forth against a sharp-edged block that sits between her legs. The dialogue is par for the course, sometimes used as exposition, sometimes laughable. The story overall is pretty silly, but fairly unimportant as a whole and feels secondary in comparison to the S&M scenes. This movie falls in the same category as previously reviewed films New Tokyo Decadence – The Slave and The Joy of Torture; if you enjoy the bondage and humiliation and torture scenes, this is right up your alley. I personally do not, but I also recognize that this colors my opinion of these titles. To each their own, right?