How would you feel if you had the ability to know who was next on death’s list? That’s the exact premise explored in this episode and it is rather chilling; but not quite as chilling as the actual, eerie occurrence that surrounded this specific episode, which forced Producer Buck Houghton to remove it from being aired the night it was to premier. 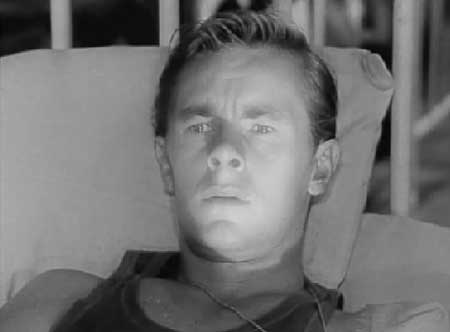 Having recently finished with filming an MGM pilot show in the Caribbean, Director Richard L. Bare and star William Reynolds were in the midst of returning to Miami when the plane’s engines suddenly stopped while cruising at 300 feet. Needless to say, the plane went down. Both were fortunate to survive the impact. But, both were also unlucky in being forced to swim with broken bones the four miles back to the coast of Jamaica. They made it safely.

Of course, near certain success could easily have been exploited had it been publicized. However, according to early news reports, Houghton, a true class act, unsure whether each had survived, leaned far into decency and declined to air the somewhat parallel or analogous episode.

Lieutenant Fitzgerald (William Reynolds), second in command in 1945 Philippine islands wartime, suddenly has the ability, through the aid of a strange shroud of light surrounding the afflicted faces he looks into, those who are destined to die in each upcoming battle and it becomes his personal hell. 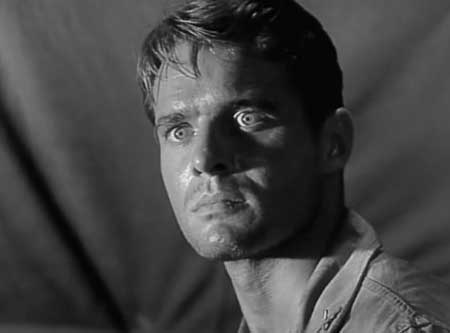 Captain Riker (Dick York), first in command and close confidant of Fitzgerald, believes the unique visions the product of a war scarred mind and orders his friend to be evaluated at Division Headquarters. Fitzgerald rebukes his commander’s disbelief, but doesn’t disobey his command.

But, before his orders can go through, a battle looms in which both Fitzgerald and Riker are to command. While going over strategy together, Fitzgerald sees the odd light around Riker’s face. Concerned and with growing faith, Riker takes caution and leaves close personal photos and wedding band behind, in the event Fitzgerald is correct.

Riker is killed, but Fitzgerald returns, somber and relieved to discover his orders to Headquarters waiting on him.

He begins to pack and inadvertently looks into a shaving mirror mounted nearby. The ghastly, white light shroud is now around his face and is obviously mortified. His driver (Warren Oats), an enlisted man, approaches asking if Fitzgerald is ready to go. Accepting the inevitable, Fitzgerald leaves his bag of packed belongings and climbs into the jeep.

The driver starts the jeep as a sergeant (William Phipps) warns of potential mines buried in the road along the way. The driver, concerned and confident, attempts to put Fitzgerald at ease, telling him to relax. That, “we have a four hour drive ahead of us.” 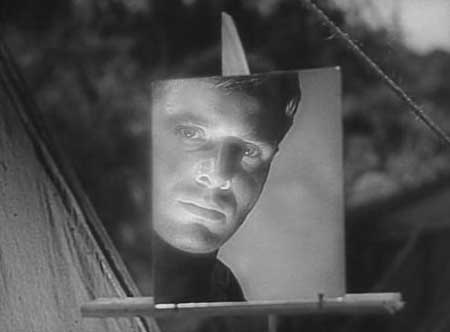 Fitzgerald retorts with, “I doubt it,” and the two drive away.

A short time later, the remaining men hear an explosion in the distance.