Land of Shadow and Substance: The Last Flight

The Last Flight, based on yet another Richard Matheson tale called Disappearing Act, was the very first straight to production script not written by Rod himself. However, he did have a hand in changing the title, which Matheson had simply changed to Flight, a typical double meaning that Matheson was quite well-known for.

Typically, writers or contributors would have to submit an outline first before any approval to move forward was authorized. However, in this case, Matheson did quite well in just expressing the idea and it was through the plot’s strength that Serling was impressed enough to buy the concept before it was even written.

Filmed at Norton Air Force Base in California, the episode did not go without the usual glitch. This time it was the allure of an actual vintage 1918 biplane prop that drew spectators into the fold and required guarding and roping off in order to keep the enthusiasm at bay. Coincidently, the plane, owned and flown by veteran pilot Frank Gifford Tallman, was no stranger to cameras, having been filmed and appearing in numerous World War I based motion pictures, more than any other.

Lieutenant William Terrance Decker (Kenneth Haigh), a member of the Royal Flying Corps and flying a wartime biplane, appears out of a white cloud above a modern day American air base. He proceeds to land and taxis about, amidst a plethora of state-of-the-art aircraft, drawing attention from security officials. 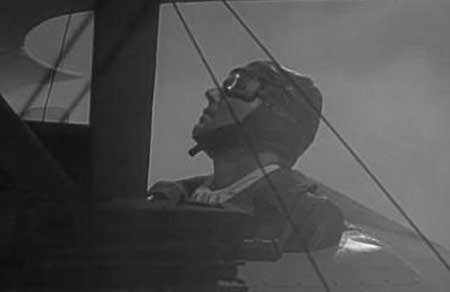 Major Wilson (Simon Scott) takes Decker into custody and immediately escorts him to the base commander, a General Harper (Alexander Scourby), who questions and seeks answers as to who he is and why he is here. Decker, just as confused as both the General and Major, explains that he has just returned from a World War I flying patrol mission. However, Wilson, and especially Harper do not believe him and tend to lean toward it all being a hoax. But, with clearly everything appearing authentic, from Decker’s uniform, ID card and plane itself, they are perplexed and question why one would take the time to create such an elaborate ruse.

Harper stumbles on one possible theory, that it all surrounds and pertains to a scheduled inspection by Air Marshal Mackaye (Robert Warwick), later that day. Decker is surprised to hear of Mackaye’s visit, having considered the man killed when surrounded by six German dogfighters over the skies of France in 1917, when, in an act of cowardice he had flown off into a strange white cloud.

Harper and Wilson explain that Mackaye was alive and well, having somehow survived, eventually becoming a war hero. After heavy thought and with Wilson beginning to believe his far-fetched tale, Decker rationalizes and realizes there is a purpose for the trip, that he has been given a second chance.

After overpowering both Wilson, as well as a guard at the door, Decker escapes and takes off running amuck across the airfield, eventually finding, starting and returning to the skies in his plane, and disappearing into that same white cloud from which he came. 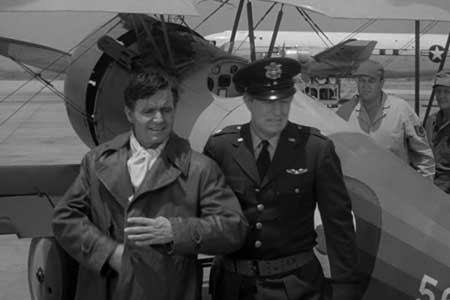 Air Marshal Mackaye pays the visit and is informed of the odd recent events. Mackaye goes on to explain that during that dogfight forty some years ago, he recalled having the distinct impression that Decker, when entering a white cloud, was bugging out and leaving him to fend for himself. But, surprisingly enough, it turned out that Decker returned from that cloud to save his friend from certain death, and he himself dying in the process.

Next time – The Purple Testament

Land of Shadow and Substance: The Last Flight