I was a little late to the table for HOLLISTON. Time Warner Cable didn’t pick up FEARNET till late last year so season one had pretty much come and gone but the time I was able to tune in but I was able to catch up via the on demand section of FEARNET and I must admit, I have enjoyed season one. I was pretty sure the show was going to annoy me but I’m glad to say, it’s good and I’m hoping season two builds on the framework they’ve managed to create.

FEARnet will premiere the second season of the hit original sitcom “HOLLISTON” on Tuesday, June 4, at 10 p.m. ET/7 p.m. PT as part of its Twisted Comedy Block, it was announced by Peter Block, president and general manager of FEARnet. Season Two of the series—which was renewed for a second season after just two episodes had aired—is set for a 10-episode order, an increase of four episodes over Season One.

FEARnet is currently carried by a majority of the major U.S. cable operators and is in nearly 10 million homes and growing. To benefit those fans who are unable to experience the show on Tuesday nights, for the first time ever, each week’s episode will be streamed on FEARnet.com starting Thursday, June 6, and will be available for a seven-day period. Fans can also catch up on episodes on FEARnet On Demand every Wednesday after a new episode premieres.

“HOLLISTON”—created by celebrated genre filmmaker, Adam Green, who wrote and produced the upcoming HATCHET III, in theaters this June—stars Green and fellow real-life genre filmmaker Joe Lynch (KNIGHTS OF BADASSDOM, WRONG TURN 2), as “Adam” and “Joe,” two aspiring horror filmmakers, dealing with the struggles of life, love, and career aspirations during the post-college period where nothing ever seems to work out like it should. With relatable storylines inspired by Green’s own life experiences that mash-up traditional situational comedy plot lines with popular horror genre-themes, “HOLLISTON” is the hip and edgy horror-fueled sitcom that FEARnet fans had been waiting for and have now embraced wholeheartedly.

“‘HOLLISTON’ demonstrates not only the breadth of FEARnet’s programming, but also the broad reach of the horror culture. We surprised people by opting for a sitcom. Now, we’re going to surprise them with the places ‘HOLLISTON’ goes, as Season Two really celebrates the genre with episodes that mock, embrace, and twist the types of scary movies we love,” said Block.

“We are thrilled with how quickly we’ve found an audience with this series and this cast,” added Green. “‘HOLLISTON’ was designed to fill a missing gap in situational television comedies and speak directly to genre fans who can’t typically find these types of themes or comedic sensibilities in the average sitcom.”

Following the events of the first season, Season Two ups the ante of outrageousness, taking the show to a wide range of unexpected places. Highlights include the series’ first animated episode, finding the town attacked by a giant blob; a Ring-inspired J-horror episode; a found footage episode; and a one-hour season finale that will boast two special musical performances by the talented cast and a shocking final scene that will raise the dead. The second season will also feature some surprising twists and developments for the four main friends that will have a major impact on their lives and leave viewers anxious for more.

“HOLLISTON” is produced for FEARnet by Adam Green’s TV and film production company, ArieScope Pictures, in association with The Hacienda Film Co. and A Bigger Boat Productions. Joining Green and Lynch as executive producers are Cory Neal and Andrew Mysko, as well as producers Sarah Elbert, Will Barratt, and Sean Becker, who directed many of the episodes this season. 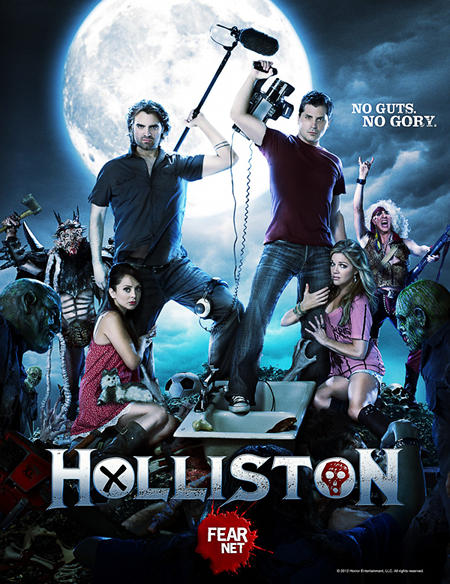