Land of Shadow and Substance: I Shot An Arrow Into The Air

I Shot An Arrow into The Air is the second episode to be filmed in Death Valley. However, unlike with The Lonely, this time everyone was prepared for the excruciating heat and lunches became longer, allowing a rest period, and salads were the primary course. 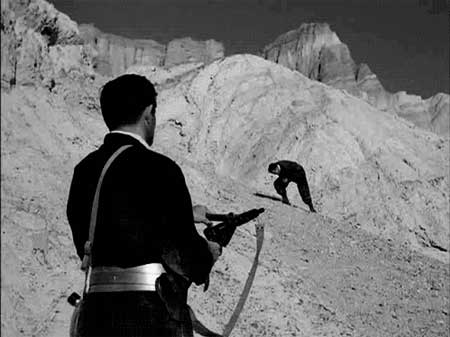 It was rare for Serling to be approached by a writer with a story idea at a social setting, but that’s exactly what Madelon Champion did. And, it was the only time that Serling bought the tale idea on the spot.
Typically, with The Twilight Zone being a fictional show, the physics, general science and basic scientific absolute principles don’t apply. However, there have been times when episodes were questioned for their validity and I Shot An Arrow Into The Air is one of those episodes, having astronauts seemingly crash land on an asteroid with the same make-up as Earth; i.e. able to breathe the air, short flight time, etc…one would think that at least one of the spacemen would realize and question where they actually were. Nonetheless, the episode possesses a chilling portrayal of human nature when the deck is stacked against and hope is fleeting.

Arrow One is the first ever manned spaceship, having a planned destination to an asteroid. The take-off is flawless and all appears to be going well during the first few minutes of flight. However, shortly thereafter, radar screens lose track as the ship crashes, killing all but three aboard.

With unyielding heat and a barren, mountainous landscape in every direction, the three surviving astronauts’ assess the situation and generally assume they have crash landed on their destination. Fortunately, the air is breathable. Unfortunately, with only five gallons of water, things appear grim very quickly. 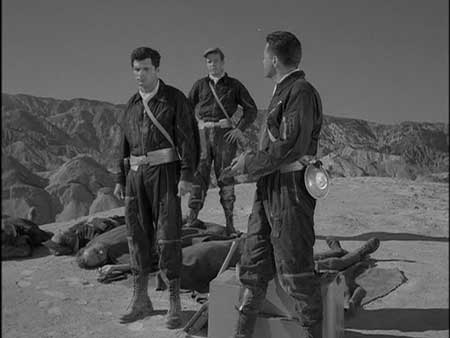 Immediately, Corey (Dewey Martin) shows his true selfish colors and begins to crack, becoming aggressive and possessive toward the water supply. The leader of the expedition, Colonial Donlin (Edward Binns), while concerned, remains firmly professional, making every effort to maintain peace and sends both Corey and the third surviving crew member Pierson (Ted Otis) to scout the area.
When Corey comes back alone with a full canteen, something that in all reality wouldn’t be possible in such heat, Donlin takes notice and questions Corey’s story of how the two explorers separated.
Under the barrel of a gun, Donlin forces Cory to take him to where he last saw Pierson, so that he may see for himself whether truth was spoken. Through the heat and over the mountainous terrain they trudge until coming to the location. However, Pierson is no longer there and a manhunt begins.

While not yet clear that Corey has committed an atrocity, all indications tend to lean toward the inevitable as they seek their fellow astronaut. However, obviously Corey has other plans, intending to be rid of Donlin too.
Eventually they finally find a mortally wounded Pierson with a head injury assumed to be from a rock bludgeoning. Unable to speak, he sketches a symbol in the sand before succumbing to death. While unable to decipher the symbol, Donlin finds hope that Pierson had found something of interest, something that can aid, and the two continue on, seeking the meaning. Corey, on the other hand, is becoming more and more disenchanted and turning corrupt. 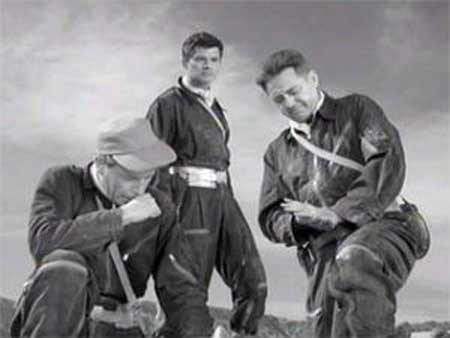 When Donlin sets the gun aside for a moment, Corey takes full advantage, eventually shooting and killing his commander. The shot has also gone through Donlin’s canteen and therefore, even less water is now available.

Alone, fast losing hope and becoming delirious, Corey scales a hill and looks over it.

In a valley below is a roadway, poles and aerial wires running alongside it and Corey realizes what the symbol was…a telephone pole. He starts a maniacal and remorseful laugh, realizing that they had crash landed back on Earth…in the desolation of the Mohave Desert.

Next time – The Hitchhiker

Land of Shadow and Substance: I Shot An Arrow Into The Air