Land of Shadow and Substance: Third From The Sun

Third From The Sun, a story written by Richard Matheson, is a science fiction tale playing on the American / Russian cold war mentality of the 1950’s-60’s era that is just as chilling now as it was when the it first appeared, reinforcing realization of just how dangerous a time it truly was, and how close we had come to potential oblivion.

Another little detail about this episode is that it contains a flaw, something basically unheard of with Serling who took pride in accuracy and rarely made mistakes, especially when it came to science. Nonetheless, an inaccuracy slipped through the cracks. With Mars being closest to us, at a well-known distance in the neighborhood of thirty-four million miles away, how could another planet be only eleven million miles? Of course, being fiction, the inaccuracy truly doesn’t matter nor hamper the episode in any way, and it’s the use of various lenses, odd filming angles, suspenseful soundtrack and the lingering cold war fears that drive this episode. 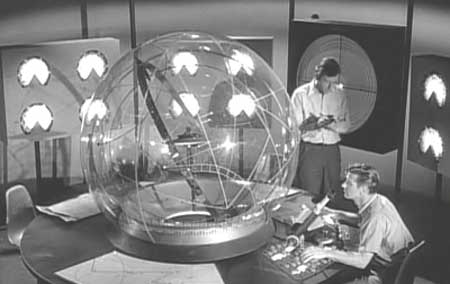 Entering a highly guarded, fenced and secured, secret government base, we meet William Sturka (Fritz Weaver), a hydrogen armament engineer, and in his face it’s obvious that he is a troubled. Before going into the building, he stops to take a smoke break, where he is soon joined by unctuous government official Carling (Edward Andrews). His watchful actions closely resemble that of the KGB as he discusses, with some warped sense of pride, an impending nuclear first strike on an undisclosed enemy within the next forty-eight hours. Sturka doesn’t share his philosophy and is cautious to not allow the crony to know his deepest thoughts. After the brief conversation, Sturka leaves and Carling monitors his departure, obviously pondering what he may be considering.

At home that evening, Sturka’s daughter Jody (Denise Alexander) notices the worry strewn across his face and questions it, explaining that she too, along with her friends, can’t help but feel that something horrible is in the air; something unexplained yet terrifying. Afterward, while alone, Sturka tells his wife Eve (Lori March) of the impending forty-eight deadline, touching on their planned escape with close friends Jerry Riden (Joe Maross), a test pilot capable of flying experimental crafts, and wife Ann (Jeanne Evans). 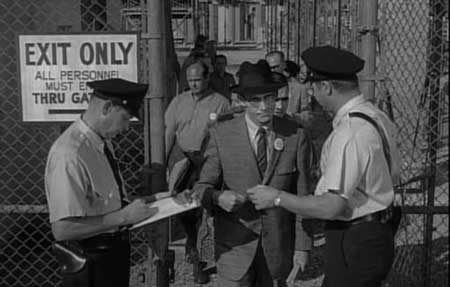 Riden, who also caught wind of the deadline, visits to discuss increasing their departure timeframe. In Struka’s basement, under the guise of fixing Riden’s perfectly good watch, Struka purposely turns on a drill to mask discussion from prying ears. And, it’s a good thing he did, for Carling was spying just outside the window.

While playing cards later that evening, after the women go to kitchen to get refreshments, Struka and Riden quietly discuss final plans. Riden shows him a trigonometric sketch of their destination, eleven million miles away. In a most suspenseful scene rivaling Hitchcock and shot upward through the glass top table, with Carling paying a surprise visit, both Struka and Riden throw off their plotting scent by discussing who owes what in the card game. Carling picks up the piece of paper off the table and looks over the score sheet, unaware that the sketch is clearly visible on the back.

Between Carling’s visit and a follow up telephone call ordering Sturka to report back to work, the couples make haste and immediately implement their escape plan. At the military base’s gate, Carling is there and draws his gun, intent on taking the two men to the proper authorities. A tussle ensures, Carling is knocked unconscious and all get away, ending up alongside a craft that uncannily resembles a flying saucer. After fending off a couple more guards, everyone is aboard and the craft takes off into outer space.

Now hurtling through space, in the c**kpit resembling a control room, both Struka and Riden discuss prior monitored radio signals coming from their potential destination, distinguishing that the planet they are traveling to is inhabited by intelligent life; people similar to themselves. They both turn to look at a radar screen, each hoping that Earth will graciously accept them. 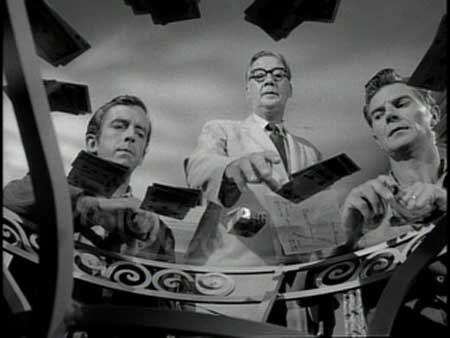 Next time – I Shot An Arrow Into The Air

Land of Shadow and Substance: Third From The Sun