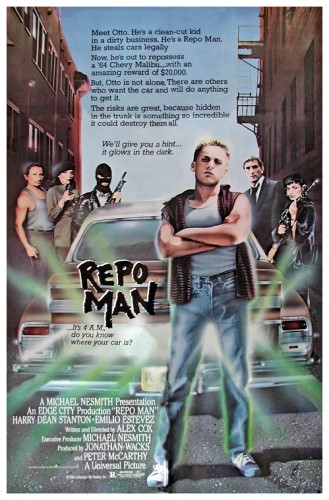 “Frustrated punk rocker Otto quits his supermarket job after slugging a co-worker, and is later dumped by his girlfriend at a party. Wandering the streets in frustration, he is recruited in the repossession of a car by a repo agent. After discovering his parents have donated his college fund to a televangelist, he joins the repossession agency (Helping Hand Acceptance Corporation) as an apprentice ‘repo man’. During his training, he is introduced into the mercenary and paranoid world of the drivers, befriended by a UFO conspiracy theorist, confronted by rival repo agents, discovers some of his one-time friends have turned to a life of crime, is lectured to near cosmic unconsciousness by the repo agency grounds worker, and finds himself entangled in a web of intrigue concerning a huge repossession bounty on a 1964 Chevy Malibu driven by a lunatic government scientist, with top secret cargo in the trunk.” (courtesy IMDB)

Mike Nesmith – musician, songwriter, actor, producer, novelist, businessman, philanthropist – is best remembered as a member of the television pop group The Monkees during the late sixties. By the late seventies, Nesmith created a music video clip show called PopClips which was sold in 1980 to the Time-Warner network, who expanded PopClips into what we now call MTV. Nesmith continued to experiment with the visual arts, winning the first-ever Grammy Award for Best Music Video in 1982, and producing the highly-regarded but short-lived variety show Television Parts. Television Parts included many unknown artists who went on to become major stars in their own right. Jay Leno, Jerry Seinfeld, Garry Shandling, Whoopi Goldberg and Arsenio Hall all became well-known comedians after appearing on the show. His success in television led directly to Nesmith becoming executive producer on two films during the early eighties: The extremely mediocre Timerider: The Adventure Of Lyle Swann (1982) and the explosive cult hit Repo Man (1984). 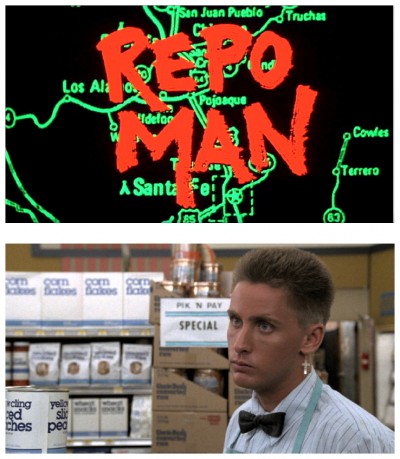 Directed by Alex Cox, Repo Man was produced entirely outside of the Hollywood system during a time when independents were still independent, and then ultimately purchased by Universal Studios for international distribution. Exactly the same thing happened fifteen years earlier to Dennis Hopper‘s independently produced cult classic Easy Rider (1969), which was ultimately snapped up by Columbia for worldwide release. From ‘New Hollywood’ to ‘Post-Classical Hollywood’, from modernism to postmodernism, from Easy Rider to Repo Man. Two road movies, yet two utterly different films. 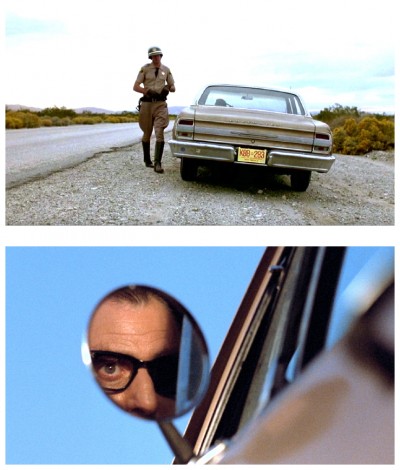 There is nothing left of Dennis Hopper’s great pathos in Alex Cox. The hippies have all died off, gone for good, and the world has become a play – the staging of a quote of a quote of a quote. To live life is no longer a question of politics but a question of aesthetics. Caustic irony and camp sensibilities dominate Repo Man, a movie that mocks every genre possible – teen movies, thrillers, science fiction, even westerns – without shying away from the foolish or the fatuous. It’s a cinematic discourse, the motion of running to-and-fro, of comings and goings, of steps and complexities. Everything is given quotation marks by director Cox: An insane nuclear physicist, a secret agent conspiracy, a weird alien visitation. It’s not a science fiction film as much as a movie about science fiction films. 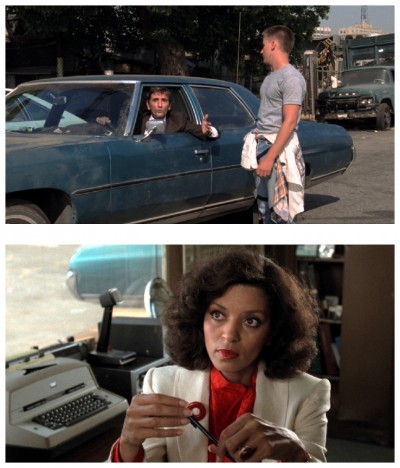 They own the night. They go to bed at 3pm – they get up again at 4pm. They are professionals – professional thieves. They are repossessors – Repo Men. Writer-director Alex Cox weaves a loose network of stories around these car snatchers, assembling a kaleidoscope of a Los Angeles far away from the neon glamour, a world where logic is nothing and speed is everything, where nothing is lasting and everything is intense. Cox also displays a gifted eye and ear for comedy. It’s interesting listening to various repo men (all named after brands of beer) spout personal philosophy or argue over such important subjects as whether or not John Wayne was a ‘fag’ just because he wore dresses and liked to watch his buddies having sex. 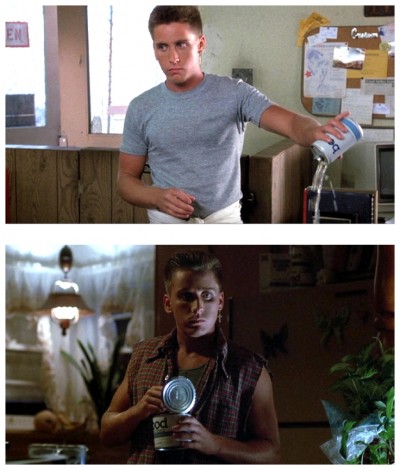 Arguably, the character with the most fascinating dialogue is Miller (Tracey Walter): “A lot of people don’t realise what’s really going on. They view life as a bunch of unconnected incidents and things. They don’t realise that there’s this, like, lattice of coincidence that lays on top of everything. Give you an example, show you what I mean: suppose you’re thinking about a plate of shrimp. Suddenly someone will say, like, plate, or shrimp, or plate of shrimp out of the blue, no explanation. No point in looking for one, either. It’s all part of a cosmic unconsciousness.” Later, the two Rodriguez brothers park outside a diner with a sign saying ‘Plate-O-Shrimp $2.95’. Miller also explains how UFOs are actually time machines kidnapping people from the present to repopulate the past. 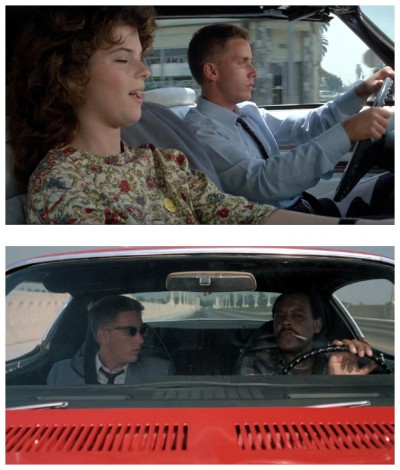 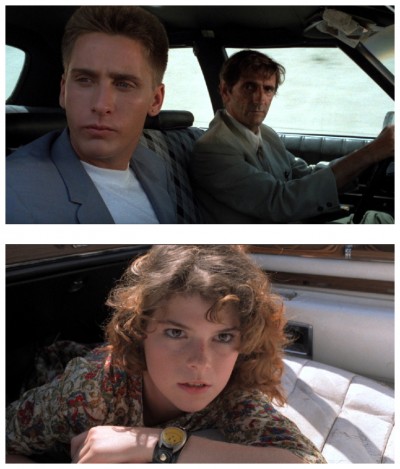 Emilio Estevez gives a confident performance as Otto Maddox, a young punk rocker living in Los Angeles who gets fired from his boring job at a supermarket. Depressed and broke, Otto wanders the streets until he meets Bud (Harry Dean Stanton), a seasoned repossession agent working for the ‘Helping Hand Acceptance Corporation’. Although Otto is initially disgusted by the concept of repossessing cars, his opinion quickly changes when he is quickly paid in cash for his first ‘job’. When he learns that his pot-smoking hippy parents have donated all their money to a crooked televangelist, he joins the agency as a repo man himself. Otto soon discovers that the life of a repo man is always intense and learns to enjoy life in the fast lane, the drugs, real-life car chases, getting shot at, the thrill of hot-wiring cars and getting paid good money for it. His old lifestyle was boring by comparison. 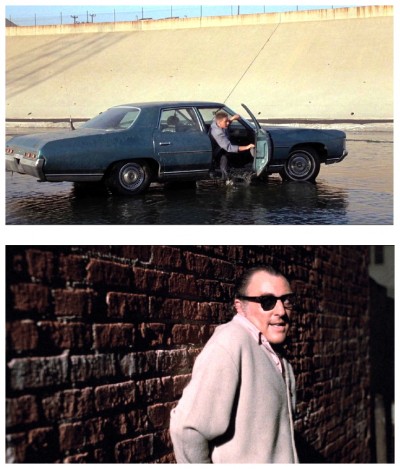 Otto meets a girl named Leila (Olivia Barash) who tells him about a 1964 Chevrolet Malibu from New Mexico which has four dead-but-still-dangerous aliens in its trunk. At first Otto refuses to believe her, but the next day a reward of $20,000 is offered for the Malibu. Suddenly its all on for young and old as Otto, Leila, a mysterious government agent (Susan Barnes) and a pair of rival repo men known only as the Rodriguez brothers (Del Zamora and Eddie Velez) all compete with each other to find the Malibu, which is being driven around Los Angeles by a mad scientist named Purcell (Fox Harris). It is discovered that Purcell has stolen four alien bodies from a Los Alamos laboratory and has driven from New Mexico to California, slowly losing his sanity along the way due to the radiation emitted by the dead aliens in his trunk. 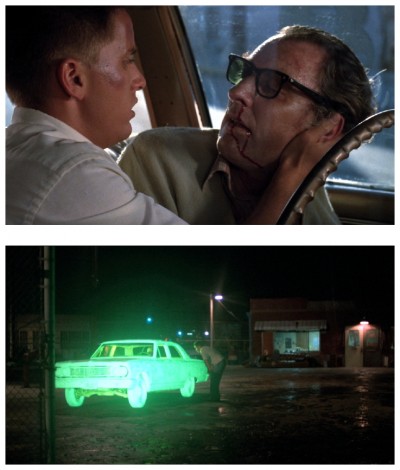 Few if any films come as close to capturing the feeling of the early eighties post-punk culture as vividly as Repo Man. Composed of fluid camera work by Bobby Muller and featuring an epochal soundtrack by artists such as The Juicy Bananas, Fear, Iggy Pop and The Circle Jerks, the movie gives us not only images of the time, but a time-image – the direct presentation of time, the very passion of thought. A space opens up between the images, appealing to our body and mind simultaneously, setting free sentiment. This is the point at which Repo Man becomes an authentic work of art again – its desire to go for anything but authenticity. It’s with this thought in mind I’ll politely invite you to please join me next week when I have another opportunity to give your cinematic sensibilities a damn good thrashing with the ugly stick for…Horror News! Toodles! 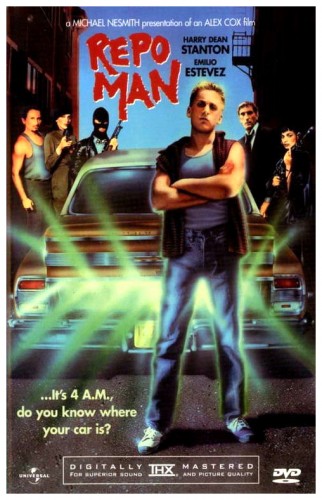 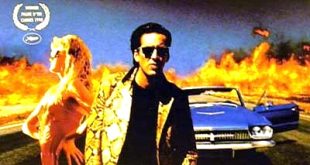 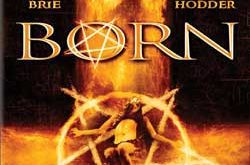 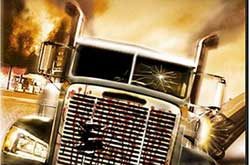 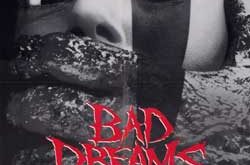