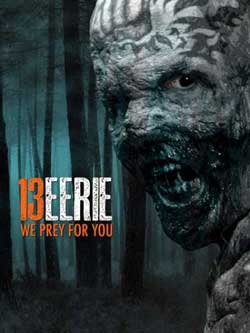 Six ambitious forensic undergrads are pitted against one another on a scientific expedition to a remote island, vying to win an esteemed trainee position with the FBI. Unbeknownst to everyone, the site was formally used as an illegal biological testing grounds for life-term criminals who were left for dead. But are they really dead or just waiting for some new flesh to munch on?

Another week…another “Zombies On The Rampage” movie to watch! This week’s entry is called “13 EERIE” and while it doesn’t try to change any of the standard tropes that other movies in the genre just keep beating to death, it does manage to be entertaining & slightly different in it’s own grisly way.

The story has some similarities with a film from 2004 called “MINDHUNTERS”. A group of six forensic students are gathered & transported to an island that houses an abandoned penitentiary (Called 13 Eerie) to participate in a test of sorts. Real corpses have been spread around the premises & the students have to pair up & participate in examining them. The spots where the corpses are have been set up as “Murder Sites” and the students have to determine how they died. They are all being monitored by walkie talkie & remote cameras set up around the island. What no one is unaware of is that the penitentiary was conducting illegal biological tests on the grounds with no regard to some of the inmates who were imprisoned for life & left on the island for dead.

The students are competing for two undergrad spots to study with Professor Tomkins (A taciturn Michael Shanks) who is conducting the test. The six are Megan (Katherine Isabelle), Daniel (Brendan Fehr), Josh (Brendan Fletcher), Patrick (Jesse Moss), Kate (Kristie Patterson) & Rob (Michael Eisner). There is an 8th person on the island with them, ex-con Larry (Nick Moran), who is basically in charge of transporting them to the island as part of his work release program. Literally minutes after they all arrive on the island, Tompkins gets the students to work and dispatches them to their assigned corpses. Shortly thereafter, an extra corpse that wasn’t supposed to be there is discovered & damn if it didn’t seem to take a deep breath all of a sudden!

The extra corpse is dismissed by the others as a ruse set up by Tomkins and they all go about their work but that corpse ain’t no ruse & it (Along with a few others) are soon walking around looking for a snack. The setup that “13 EERIE” presents is unique (“MINDHUNTERS” not withstanding) when compared to other zombie films but it soon regresses into the standard “Hungry Zombie” movie with reckless abandon. While all of the actors perform admirably in their roles (Isabelle especially) they can only do so much when all the script gives them to do is run, scream & kill zombies. And that’s a shame since the movie sets up an interesting initial premise that isn’t standard for the genre. Writer Christian Piers Betly had a great idea but it feels like he took the safe route instead of letting his freak flag fly & run with his original notion. In addition, the script gives us seven intelligent individuals who, after their initial shock, should have been able to rationalize their situation and act accordingly but they quickly turn into a bunch of screamers who keep asking “Where Is Everybody”? I excluded the ex-con only because we’re not told anything about his background. 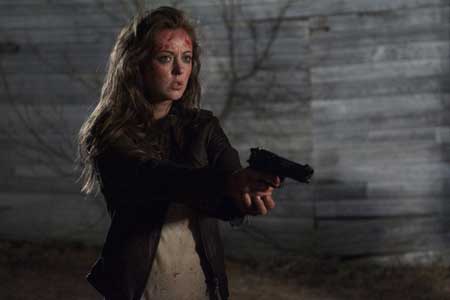 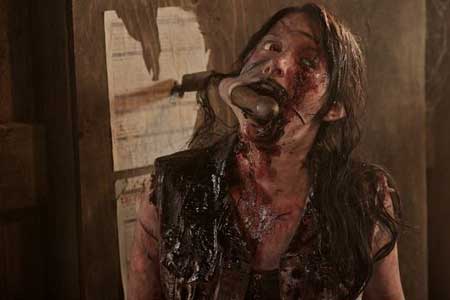 The zombies themselves aren’t your standard “Shamble & Moan” type either, nor are they particularly rotten looking. Apparently the experiments preserved most of their flesh, instead giving it a charcoal black veneer (Although the script doesn’t really explain how the zombies got created). But there are bits & pieces of open wounds & bloody sores to be seen if you look closely. They aren’t the running zombies that are the current “Flavor Of The Month” but they don’t do the George Romero shuffle either, they’re quick & very hard to kill. The makeup effects (By Emersen Ziffle) are both familiar & unique with the head & body tattoos of the inmates highlighting his designs. And while the gut munching is sparse it’s extremely effective & convincing.

Director Lowell Dean does a good job keeping it all together. He maintains his grip on the story & his actors, never letting either of them go over the top. But since the script falls back into “Been there, Seen that” mode after about 30 minutes or so that couldn’t have been too hard to do, could it? It’s a shame that the script fails to give him & the actors more meat to chew on, especially after it’s intriguing set up. Additionally the film ends quite abruptly but I can’t tell if that was by choice or design. It’s a humorous type of ending but it feels unfinished…as if the production just ran out of money. Some of you will like it & some of you will be furious with it, I found it entertaining in a “WTF” kind of way. 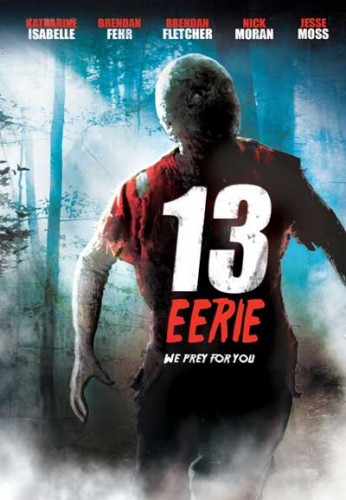 All in all, “13 EERIE” has a lot going for it in the beginning & while it does fall back into a pretty standard zombie film it’s still entertaining. It certainly delivers the goods & it isn’t boring. It’s just disappointing considering where it might have gone if the script had some balls to it & didn’t try to play it so safe. The acting & makeup effects make up for some but not all of what the script lacks. It’s still worth a watch though & I can never get enough of Katherine Isabelle (She’s also stars in “AMERICAN MARY” which is already on my “Best Of 2013” list) so if you have an opportunity to see it then do so. Just don’t expect too much by way of story and you’ll be just fine. Then again, is there a way to tell a story featuring flesh eating zombies any differently nowadays?