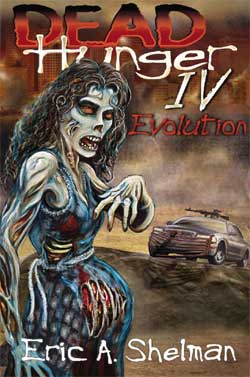 As the survivors of the zombie outbreak strive to restore normalcy, civilization and sense of society in the town of Concord, New Hampshire a new threat of epic proportion has presented itself. The female gender seems to be surpassing all grasp of others comprehension in their ability to adapt, co-exist and even hunt the living. Will the band of Flex, Gem, Hemp, Charlie, Dave, Serena and their loved ones be able to overcome the undead adversity or will their ultimate demise lie at the hands of the undead in Dead Hunger: Evolution?

Shelman’s runaway zombie series is introduced in its fourth installment with a prologue from Flex Sheridan. Volumes 1-3 were told in anecdote type format through first person perspective of the post-apocalyptic circumstances and conditions from Flex, Gem and finally Hemp. It’s only fitting this edition begins with a first account re-enactment. The tale segues unto third person perspective; keeping us fixated deep in the action, in page turning frenzied and fervor.

It’s especially admirable to witness this edition told in third person persona and is equally if not more impressive than previous predecessors. Shelman’s gift for focusing on current action and telling the tale with subtleties such as dialogue, body language and behaviour keeps the story moving at consistent pace, involving the reader and refusing to let up on relentless pursuit of ever rising tension. It’s no easy feat to describe a situation genre in third person without at times appearing contrived or subservient in extravagant degrees of exposition. Shelman executes DH4 flawlessly maintaining the audience sense of ravenous, insatiable hunger for more.

Each of the characters interactions have become so casual, relaxed and natural it gives the readership a sense of desire to be a fly on the wall in virtually any circumstance. With Flex’s tough guy exterior and p*ssy cat sentiments, Gem’s smart assed, no nonsense beauty, Hemp’s brilliance and passion for restoring a normal, safe and healthy way of life, Charlie’s whimsical, sarcastic and zeal for life along with Dave’s swashbuckling ‘it’s an awkward moment’ quips are all elements we’ve come to admire, love and respect about our protagonists.

The bulk of the tale contains a delicate balance of science, action, horror, humor and heart wrenching drama. A little something can be found for everyone in this author’s works, forever cementing his work in popularity to a universal audience.

A humanistic approach is delivered from paragraph one with the town residents of Concord adapting to a world gone mad but getting on with life in the best way they know how. Several of the women’s pregnancies enhance an overall impressionistic theme of hope in repopulating and restoring civilization once again.

But if you’ve been lead to believe this is a touchy and feely edition, swayed too far from its predecessor; than rest assured this could not be further from the truth. The terror, guts and gore are never disappointing from the rubble of Ratz bones and hair to a severed head carried around in a cake dome, the descriptions are every bit as much dark and macabre and in fact reach near hysterical plateaus of horror.

Eric Shelman should perhaps be most commended for keeping his writing versatile yet dependable enough to warrant the need for a continuing series that is void of all of the preposterous monotony and predictability we’ve become accustomed to in other zombie genre sequels.

A must read for fans of the genre or avid readers curious upon a flourishing, highly talented author.