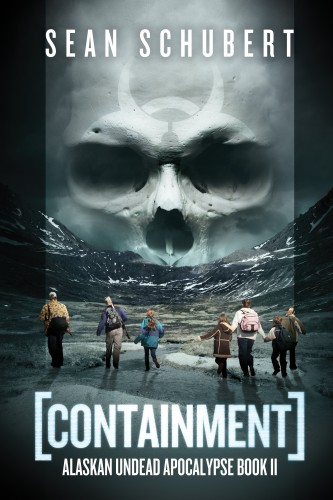 Picking up after the first book, INFECTION, left off, CONTAINMENT is another feather in the cap of Permuted Press and an admirable continuation of a series which is shaping up to be an extremely satisfying zombie saga from author Sean Schubert. As well as sharing a surname with an iconic and wonderful composer, Schubert has a talent for making you keep turning the pages, even in a zombie apocalypse yarn which upon first glance may seem like many others.

The survivors of the first book continue their fight for survival in Anchorage, Alaska, which has been cut off by the hordes of marauding zombie beasts lurking all around. The setting adds a claustrophobic air of tension to the story, and characters are understandably at their wits’ end throughout. There is a rumour that the zombie outbreak beyond the city has been contained, and so all our heroes need to do is stay alive a little longer… or is it?

This second book builds nicely on the foundations of the first volume, but there may be some readers who find it to be somewhat lighter on action and heavier on characters’ own thoughts. I did enjoy the fact that in this book, there’s more than just zombies to contend with, as some of the new characters are more than a bit nuts. This is to be admired as Schubert handles them very well.

The touches of humour are well placed though and make the characters feel a lot more human than they tend to in genre fiction sometimes, especially in a niche such as this, and fans of that first book are going to find a lot here to enjoy, even if it’s not the earth-shaking payoff that some may have hoped for. The religious loon aspect makes sense in there too, as that’s kind of how some more weak-minded people would indeed react in this situation.

One issue that may be apparent is that this does feel like the middle book in a series and thus may not have as much going on as some would like, but I would say to them that it is very important to the development of the series and where the story will go next. I mean, if you’re surviving a zombie apocalypse and trying to have some kind of life as well as fighting off flesh-eaters, you are going to spend more time with your thoughts and doing normal things as well as aiming for head-shots, aren’t you?

CONTAINMENT isn’t a perfect novel, but it’s a great continuation from the first book and does flesh out the world the author has created for it nicely. Things bode well for book three, as long as Schubert maintains the quality of his splendid and uncluttered prose.