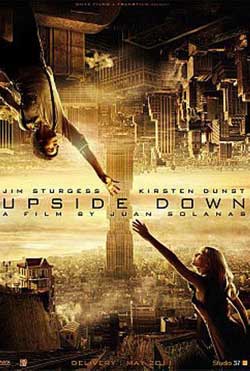 A man searches an alternate universe for a long-lost love from his youth.

You haven’t seen a movie like this before! It was a trailer that caught my eye in this bizarre science fiction drama/romance tale that out the box feels alot like a future cult film in the making. The idea of a world that butts up to a sister world “upside down” is a wild concept to begin with. Though to see it on screen in a way that works extremely well is another. The film “Upside Down” can’t escape the scientific aspect which at times felt like it was influenced by the film “Inception”. 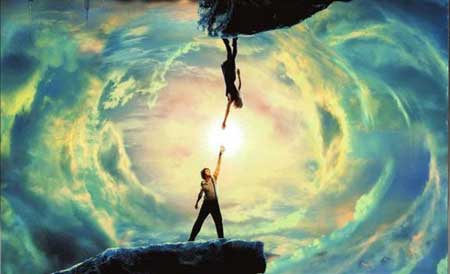 This scientific aspect is presented right from the first few minutes. As we are told, this reality exists in its own universe. One that has 2 worlds side by side rotating around the sun. The upper world and the lower world each have their own gravity rules and inhabitants. Essentially due to the gravity aspect, the opposing force is known as “inverse gravity” of which certain objects that are taken from the opposite side can contain “inverse matter”. Inverse matter, such as steel, heats up due to the opposing gravity. This steel is used sometimes as heat due to its molecular properties.

But before we get too scientific-sounding, it’s worth noting that the film takes a romantic angle that has 2 young children meeting on a mountain-top and striking up a friendship. This grows into a romance when they become teens. Now, the complications of having 2 people upside and worlds upside down is tackled head-on through out the film. This union of inhabitants of 2 different gravities, especially when breaking the rules set out by the planet, becomes the primary conflict. Eden develops amnesia after botched union that hits her head. 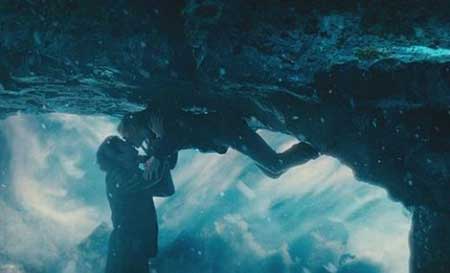 It’s actually quite fun and interesting to see how each has to deal with the complications of gravity and its potentials while existing in a simultaneous parallel universe. Our 2 main characters in the film are Kirsten Dunst as “Eden” and Jim Sturgess as Adam. We’ll forgo the obvious play on paradise, etc, but the film takes on the premise of 2 star-crossed lovers who are separated and then reunited. To add to “that” complication, they live on opposing worlds.

The upper world is populated by a higher class that are known to be more wealthy. The lower world (or opposite world) is somewhat in poverty and distressed. There is a company corporation that connect the 2 known as “Transworld”, a powerful company that employs residents from both worlds in the efforts of new scientific discoveries (and not to mention monopolizing the planet). 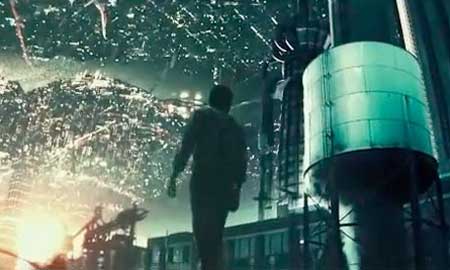 The story works like a modern Romeo and Juliet fairytale with the Transworld as the antagonist. Adam, who is determined to reunite with the love of his life decides that he can dupe the system momentarily with the use of inverse matter shoved in his clothes. Things get complicated when the matter begins to heat up after a relatively short amount of time. All the while, the 2 of them are employed by the same company.

Actor Timothy Spall really adds a nice touch as a co-worker scientist who Adam befriends on his first day of work. The idea of cubicles and someone else on your ceiling is certainly a new approach to office work. 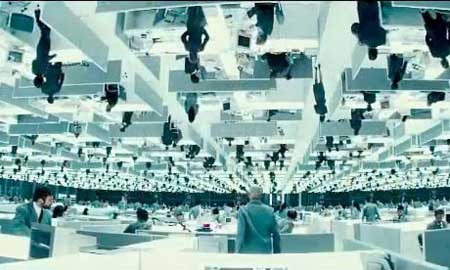 The movie is helmed by Argentinean director Juan Diego Solanas who had his hands full with trying to shoot each world in combination and the fx issues that come with tackling such a large CGI based film shoot. You have to hand it to the team which really handled the whole thing quite well (which is a visual feast to gaze upon at times). The viewing experience even left me “somewhat” unbalanced at times with looking at things always upside down in relation to each other. 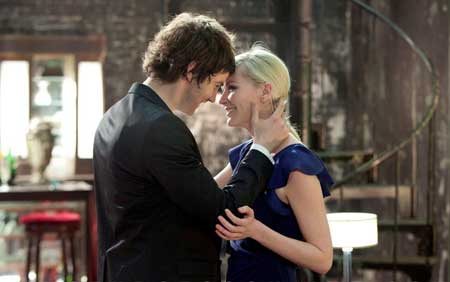 Actors Kirsten Dunst and Jim Sturgess do a fantastic job of making the experience fun to watch and believable. I felt the film had alot to offer both drama fans and those who merely came for the science fiction of it all. I’m actually looking forward to the high definition version, so that I can see the FXin greater detail. But as bizarre as all this sounds, it just simply works and leaves ya smiling. A very cool piece of work that excels by being innovative in execution.