“Butcher Benton goes to his death in the state prison, cursing the three men who double-crossed him following an armored-car hold-up: Squeamy Ellis, Joe Marcelli and Paul Lowe, his attorney and leader of the gang. He vows to return and kill them and dies without revealing the location of the stolen money. Detective Chasen is determined to keep working on the case until the stolen loot is recovered. Benton’s body is taken to Professor Bradshaw and his assistant for experimentation, and they manage to restore him to life, making him practically indestructible in the process. He takes off after the three men, getting rid of everybody who stands in his way. He is impervious to police bullets. He kills Ellis and Marcelli, while Lowe seeks police protection. Benton takes to the sewers to recover the hidden loot and the police are powerless to stop him.” (courtesy IMDB)

This week I offer you the opportunity to witness a violent criminal known as ‘The Butcher’ as he’s brought back to life by a Mad Scientist using the mysterious and increasingly expensive power of…electricity! The Butcher becomes invulnerable and seeks vengeance upon those who caused his execution. In other words, take the classic Noir film D.O.A. (1950), insert one Frankenstein (1931) monster, dumb it down a bit for the drive-in crowd, and you have this week’s evidence of human folly, The Indestructible Man (1956).

Scribbled on the back of napkin by Vy Russell and Sue Dwiggins for alleged filmmaker Jack Pollexfen and starring Lon Chaney Junior, The Indestructible Man was completed independently and then grudgingly picked up later as an afterthought by Allied Artists. Admittedly, it looks like it was cheaply slapped together to make a quick buck using Chaney’s name – because that’s exactly what it was – but it does have some camp value, thanks to the docile dialogue and vapid voice-over. Lon is a delight as always, but if his eye-twitching becomes annoying, just do as he did at the time, and turn it into a drinking game. So prepare yourself for the scream that shocks the screen with 300,000 volts of horror! Inhuman! Invincible! Inescapable! Inconceivable! Inconclusive! The Indestructible Man!

The Indestructible Man isn’t so much a movie as a seventy-minute montage of stock situations and cliches. I’m pretty sure it was put together out of some kind of kit. I can imagine the director with an Airfix model instruction sheet deeply inhaling glue while mumbling, “Attach Mad Scientist C to Dead Convict A, then insert Oscilloscope Close-Up from stock footage reel two…” Its lack of imagination is almost as awe-inspiring as its innocence: Generic cops, generic robbers, generic mad science, generic locations, generic dancing girls, generic climax. Even the has-been star is generic. Lon Chaney Junior, the blandest of all the washed-up Universal actors, was given the part of Butcher Benton. He gets his lines out of the way early so he can get to the serious business of eye and nose acting – between drinks, that is.

Lon’s first starring role was as a man who gets turned into an electro-powered monster by a Mad Scientist in Man-Made Monster (1941), so it’s interesting to see that fifteen years later, as his career was really hitting the skids he turned up in The Indestructible Man. It makes a lot less fuss about the use of electricity than Man-Made Monster, and Chaney’s character is a shady gangster rather than a shady carny, but it’s hard to shake the idea that the filmmakers had the earlier movie in mind as a source of inspiration. Benton’s old girlfriend Eva Martin is played by Marian Carr, who appeared in about a dozen films, usually playing a character named ‘uncredited’. But what the hell, she’s simply beautiful to look at, even if her character is so ineffectual. Being a dancer does, however, give the cameraman ample reason to show off her figure – and a very lovely figure it is too.

Much of the film is narrated by police detective Dick Chasen. That’s right. Dick. Chasen. I’m not touching that one, and neither should you for that matter, you don’t know where it’s been. In fact, actor Max Showalter was so embarrassed by the character name he used his pseudonym Casey Adams. He battled giant sea snails in The Monster That Challenged The World (1957), he fought little Billy Mumy and lost in The Twilight Zone episode It’s A Good Life, gave The Beaver a damn good thrashing in the original Leave It To Beaver pilot and, much later, fought Molly Ringwald to the death in Sixteen Candles (1984). Narrowly losing on points, it was his final fight, um, film. Dick Chasen is supposed to be a hard-boiled Sam Spade detective type, but is handicapped by his vapid voiceover and undetectable personality. Miscasting at its finest.

There are many more semi-familiar faces from other anti-classics of yesteryear, like Butcher Benton’s bastard barrister Paul Lowe, played by Ross Elliott, who could be found in creature features like The Beast From 20,000 Fathoms (1953) and Monster On The Campus (1958), and his henchman Joe is played by Kenneth Terrell, from The Brain From Planet Arous (1957) and Attack Of The Fifty Foot Woman (1958). Professor Bradshaw, the man who cures dead people by simply pumping 300,000 volts through them, is played by Robert Shayne from The Face Of Marble (1956), The Giant Claw (1957), War Of The Satellites (1958), How To Make A Monster (1958), as well as The Adventures Of Superman on the small screen.

The one face that’ll certainly be familiar to all you baby-boomers out there doesn’t even get a credit. I’m talking about the professor’s assistant, Joe Flynn, who achieved world-wide infamy as the inept Captain Binghamton in McHale’s Navy before being snapped up by the Disney monster and forced to appear in such family-friendly fare as Son Of Flubber (1963), The Love Bug (1968), The Computer Wore Tennis Shoes (1969), My Dog The Thief (1969), The Wacky Zoo Of Morgan City (1970), The Barefoot Executive (1971), The Million Dollar Duck (1971), Now You See Him Now You Don’t (1972), and the final nail in Joe’s celluloid coffin, The Strongest Man In The World (1975), which was notable for having the weakest premise in the world.

There’s one other very special guest appearance during the climax of the film. No names, but I’ll give you a few hints: Them! (1954), Rebel Without A Cause (1955), Chinatown (1974), It’s Alive (1974), Grease (1978), Blue Thunder (1983), Repo Man (1984), Buckaroo Banzai (1984), To Live And Die In LA (1985), Terminator II Judgment Day (1991), Gone In Sixty Seconds (2000), and Drive (2011). That’s right, the Los Angeles River drains and canals have been used as choice locations for gazillions of films and television shows. Since the river is barely a trickle for most of the year and the culvert is usually a dry featureless slab, it’s often used for races, car chases, gang rumbles and Keanu Reeves‘ acting coach. There’s lots of other recognisable LA landmarks in The Indestructible Man, including the Angel’s Flight railway more recently spotted in The Muppets (2011) and the beloved Bradbury Building, as seen in The Outer Limits, Blade Runner (1982) and, more recently, The Artist (2011).

Despite what it says on the DVD cover, The Indestructible Man is by no means a classic – at least I don’t think it is. It’s old, in black-and-white and stars Lon Chaney Junior, a name associated with Universal Studios, but do these qualities alone make it a classic? Shouldn’t it also be – what’s the word – Good? The only reason the film didn’t suck was because sucking would take too much effort, and the most redeeming feature of The Indestructible Man is that it’s way too ordinary to really be objectionable. Speaking of objectionable, I’ll be back next week come hell and high water to assault your senses with another so-called classic fetched from the deepest depths of the Los Angeles sewerage system for…Horror News! Toodles! 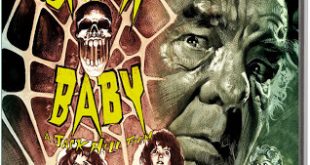