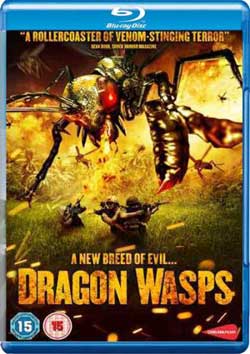 A scientist enlists the help of the US army to investigate the mysterious disappearance of her father, deep in the Belizean jungle. Caught in the crossfire between a brutal guerrilla army controlled by a mystical warlord, they are also confronted by an even bigger terror giant mutated wasps that are, for some reason, thirsty for blood.

Despite the fact that the CGI ‘dragon wasps’ were incredibly lame, the acting was not so great, the dialogue was corny and the entire story was dripping with cheese (with a dash of cocaine thrown in for good measure), I couldn’t help but enjoy myself watching this for some reason. It’s completely ridiculous and silly, but the great thing is that it realises and embraces this! As long as a movie is aware of how utterly insane it is being, I can retain some kind of respect for it (much like the rather bizarre film about a tyre with telekinetic powers, ‘Rubber’. What?). I could see exactly where the movie was going at every turn, especially as the giant wasps were revealed in the very first scene, so there is absolutely zero suspense. For these reasons, keep your expectations low for Dragon Wasps and you won’t be disappointed. In a way, I wouldn’t even describe this one as a horror movie, because it has more of a standard ‘action’ feel to it. No scares whatsoever. Sorry. 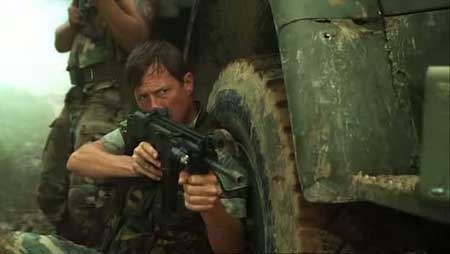 The basic storyline here (and trust me, I mean basic!) is that Gina, an entomologist (that means ‘bug fanatics’ to me and you), decides to go looking for her father, also an entomologist, who went missing in the jungle. She ropes on board her friend, Rhonda, yet another entomologist (!), and soon gets even more assistance from an army officer, John, and his group of army buddies who happen to be guarding the area. It isn’t long since they venture into the jungle themselves that they start to get attacked by a vicious horde of gigantic wasps (which appear to change sizes from scene to scene), as well as an evil rabble of drug dealing gangsters who seem to be out to get them just for the sheer hell of it. The leader of the gang only has one eye and is also a ‘witch doctor’, true to stereotypical form. Oh, and did I mention that the gigantic wasps also breathe fire? If that’s not incentive to watch the film, I don’t know what is. 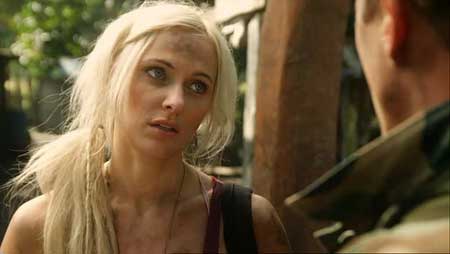 I liked the fact that the film kicked off with action pretty much within the very first scene, and continued to deliver chaos at an incredible rate. However, there was never any atmosphere or tension built up to, which means that nothing that happens manages to scare in any way. Hell, the CGI wasps are so laughable that probably not even a six year old would be frightened of them! There’s lot of gunfire and explosions to excite and entertain the audience which is good because it keeps them on their toes, and engaged from start to finish. I felt that the two female characters, aside from their extensive knowledge of insects, weren’t actually all that helpful to the team. No surprises there then. One of the women somehow managed to mistake a bag of cocaine for an explosive device at one point! Duh. Call me judgemental if you will, but I doubt there are many entomologists out there who look as pretty as they do, but hey, I shan’t complain. Every movie needs a bit of eye candy, even one’s with giant mutated wasps apparently. 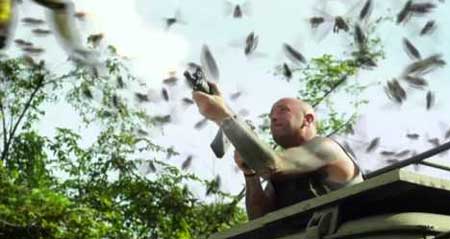 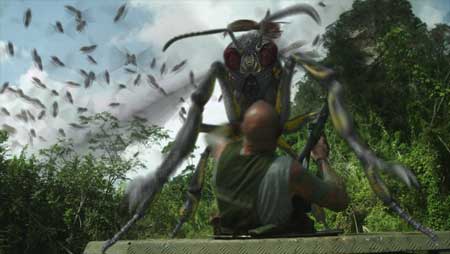 For me, there was perhaps a few similarities than can be drawn between Dragon Wasps and Eight Legged Freaks – they are both a bit of a piss-take and require the rules of ‘reality’ to be suspended for the duration. It also has the characters venturing back into the lair of the monstrous creatures in the climax of the story to retrieve their fellows, some of which miraculously seem to be still alive for no reason whatsoever! Whereas in Eight Legged Freaks, the giant spiders are caused by a radiation leak of some kind, Dragon Wasps is actually to do with a government conspiracy to create a super insect. Yeah, I don’t understand the motivations behind that either. The concept itself is not exactly a jaw dropper, but it is just a bit of fun, I suppose. Another comparison to make could also be Predator (a bit of a stretch, I know! Ok, a lot of a stretch!) because they both feature a group of people lost in the jungle being attacked by a strange, unnatural creature. 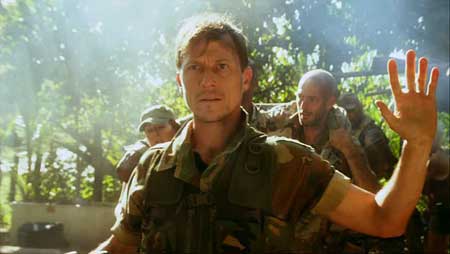 The director of Dragon Wasps, Joe Knee, has actually won a few awards with his previous works and he does have the potential to make a name for himself within the film industry if he keeps at it. Who doesn’t love a cheesy B-movie every now and then? This is definitely a film that you have to be in the right mood for before watching it, and I would actually recommend doing so with a group of people. With alcohol present. I feel that this is the best way to enjoy this film, because if it’s taken too seriously it’ll end up falling flat on its face. This is an entertaining watch though, I’ll give it that at the very least.