The Vampires of Bloody Island – More fangs and blood! 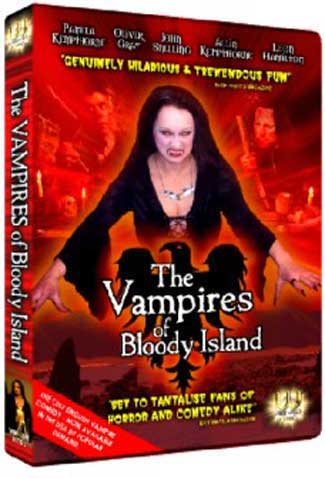 Fans demand gets cult British comedy ‘The Vampires of Bloody Island’ a release in the USA and Canada.

Just to prove all vampire movies needn’t be either the sparkly teenage fantasy of ‘Twilight’ or the gruesome bloody gore of ’30 days of Night’, a new vampire movie hits the shelves this week which goes straight for the neck of the classic vampire films of old. ‘The Vampires of Bloody Island’ is a hilarious laugh-packed vampire comedy, made in a delightfully nostalgic style. And to add to its wonderfully quirky and eccentric atmosphere – it’s British!

The bitingly fresh horror/comedy stars Pamela Kempthorne (Harry Potter, Shaun of the Dead) as a mildly deranged English aristocrat vampiress with plans to take over the world from her ancient castle on an English island. Out to stop her are two bickering London office workers and a bizarrely eccentric vampire hunter, blundering in and out of trouble, facing werewolves, demons and the loss of most of their clothing along the way!

The knockabout comedy resurrects from the grave all the vital ingredients of a vampire fantasy, with old creepy English locations, shockingly brilliant characters, wonderful English accents and dialogue as witty as the best of Buffy, all set to a kicking soundtrack from some of the worlds best known Goth bands such as Inkubus Sukkubus and Theatres des Vampires.

From an initial quiet release on a small independent label in the UK ‘The Vampires of Bloody Island’ has grown into a strong underground hit with the British press clambering over themselves to proclaim it as a cult vampire movie. Chronicles Magazine called the film “Bloody good fun”. The Scream Magazine called it

“A real cult classic”. Fortean Times said it’s “Laugh-out-loud funny” and “Could attain Rocky Horror style cult status” while Britflicks called it “A must have for your DVD collection”.

English fans have even been holding Vampires of Bloody Island parties since the website of the popular ‘Radio Times’ magazine encouraged people to get together and enjoy the film with a bottle of wine as a means of escaping the recent Soccer World Cup. With such a rapidly growing fan-base in the UK, vampire film fans in the USA and Canada have been lobbying for the film to also be released Stateside. A wish that has now been granted by cult DVD label The Weird World of Wibbell, who put it out this week.

Leading actress Pamela Kempthorne is delighted that the film is receiving such global attention:

“We filmed The Vampires of Bloody Island as a B-movie comedy, catching the style and flavor of the old English Hammer vampire films that we grew up loving.” She said from her gothic styled home in London. “We always expected it to go down well with vamp lovers here in Britain, and hoped for some interest from other countries, but we never dreamt it would take off as big as it has. I’ve been getting loads of fan mail from New Zealand, from Brazil, all across Europe, we’re going down well in countries I’ve barely even heard of before. It’s fantastic that it’s now come out in America. We never expected that, but there’s been so many letters and emails from the USA that our distributor bowed to the demand and has released it there too. We’re being compared a lot to Monty Python and Rocky Horror which is quite a compliment. Fans of English comedy are loving it!” 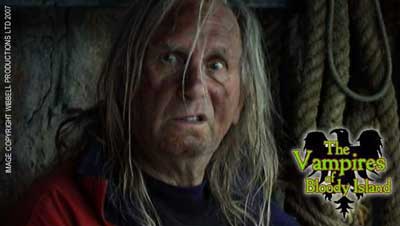 Included on the DVD are a stack of special features including a ‘Making Of’ documentary and two extra videos that are proving to be a hit at all the Vampires of Bloody Island parties.

“Yeah, there’s also a Karaoke version of the title song on the DVD” says Pamela, “and there’s a black and white silent movie in the style of the 1930s film Nosferatu, which was the movie that really kicked off the whole vampire craze. The first big vampire movie ever made. The fans are telling us they really love those. They’re a good warm up to an evening of vampire fun-filled action watching the film.”

The Vampires of Bloody Island is out now and available from www.bloodyislandmovie.com/USA.html

Tags The Vampires of Bloody Island