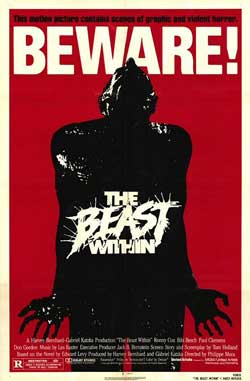 17 years after being brutally raped & impregnated by a creature on her honeymoon, Caroline MacCleary’s son is changing into something…but why and more importantly…what?

Oh yeah, The Black Saint remembers the build up before this one was released way back in 82′. The tagline was “We dare you to watch the last 30 minutes of this film without screaming, covering your eyes, or running from your seat” Now how could anyone who digs this kind of stuff even attempt to resist that clarion call? I went with a couple of friends who actually tried running from their seats, not because they were scared though. They just had the hardest time trying to make heads or tails out of this enjoyable mess of a movie! 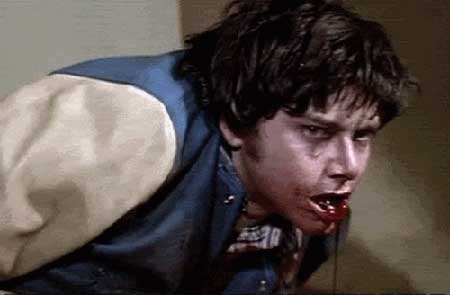 The year is 1964. The place is Nioba, MI. A couple (Ronny Cox & Bibi Besch) driving through on their honeymoon stop at a gas station for directions. A short drive afterwards they get a flat tire driving through some especially desolate woods (That couldn’t have been expected…could it)? So good ol’ newlywed Eli (Cox) decides the best thing to do is to hike back a few miles to the gas station for some help leaving his new bride Caroline (Besch) in the car where she’ll be safe inside the car…yeeah right. She hears some hullabaloo and decides to go walking around in the dark woods (Always a good idea) and is promptly attacked & raped by something that looks human but is it?

Cut to 17 years later where we find our dopey newlyweds still married to each other and searching for some answers to their son’s medical condition. He’s very ill and no doctor can figure out what it is other than some kind of odd hormonal unbalance that is killing him slowly. Caroline tells Eli that he has to face the fact that their son Michael (Paul Clemens) isn’t his biological son. He is the product of the rape 17 years earlier and maybe if they went back to the town of Nioba & asked some questions they might be able to find out the identity of the rapist & maybe get some clues as to what’s killing Michael. In spite of his anger, Eli reluctantly agrees and the three of them (Michael is all of a sudden well enough to travel) take a trip down to the sip’ in hopes of finding some answers.

Once the trio arrive back in the town of Nioba, they find that the locals aren’t too friendly and get even unfriendlier when they hear the questions the family is asking. All the while Michael is getting sicker & seemingly angrier at everything and everybody except the lovely Amanda Platt (Kitty Moffat), who takes an immediate shine towards Michael. But her father is extremely protective of her and swears to shoot Michael if he ever catches them together so in addition to whatever is ailing poor Michael he gets a case of heartache as well. What’s a boy to do? 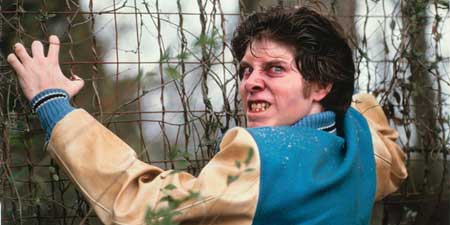 Well, he could start by systematically murdering certain townsfolk that seem to have done something personal to Michael despite the fact that they’ve never laid eyes on him before. Michael periodically goes into some kind of identity change in which he gets sweaty and surly. His voice gets deeper and has an evil undercurrent to it as well as he seeks out and eliminates certain people who he knows by name all of a sudden. Michael not only murders them but he even manages to take a bite out of a few of them along the way! But what is causing these violent outbursts in him and how does he know his victims? 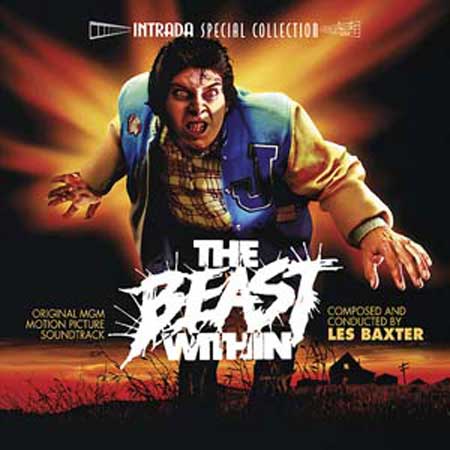 Directed by Philippe Mora (Howling 3: The Marsupials, Communion), “The Beast Within” labors to explain what the hell is going on with young Michael. Scripted by “Child’s Play” director Tom Holland and based on a novel by Edward Levy, it leaves far more questions than answers when it’s all said and done and there are plot holes that are similar in size to black holes in outer space but that don’t mean that there ain’t a ton of fun here…oh no it don’t because you have to remember the promise made on the poster: “We dare you to watch the last 30 minutes of this film without screaming, covering your eyes, or running from your seat”. The last 30 minutes of this movie belong in some kind of hall of fame for whacked out resolutions & could be sold on it’s own with the new title “Bladders Gone Wild”! All of Michael’s problems have something to do with Cicadas (The whole 17 years bit get it? I didn’t either. I don’t think anybody did) & the identity of his real dad who was some sort of a perv that the town captured and thought the best way to punish him was to chain him up in the basement of some old house. I think that’s the deal here anyway…but it doesn’t matter cuz’ Michael has been slowly changing over the course of the movie from a dopey looking teen to a dopey looking teen with green teeth and dark circles under his eyes! But that ain’t the whole of it though because about 10 of those last 30 minutes highlight Michael’s final transformation into….CICADA MAN! Oh yeeah boy…he starts huffin’ & puffin’ and his back starts bulging out something awful while his eyes bulge out of his face & his teeth start fallin’ out as his head starts to expand….and expand and expand and expand and expand. 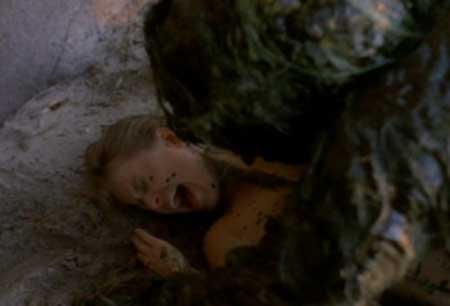 His darn head just keeps on getting bigger and wider! And he grows claws where his fingers used to be as well!! But you know what’s the best part of this whole c**kamamie transformation (Effects by Tom Burman)? The group of people who are in the room with him watching him do the bug out and not moving a motherf*ckin’ muscle as it happens! In what is really one of the best “What The Fuck”? scenes in movie history, a group of people (Including his parents for gosh sake) just stand there and gawk as Michael’s head grows to the size of a small zeppelin. We know they’re standing and gawking because director Mora takes pains to cut away to their astonished faces every few seconds before going back to Michael’s ever expanding head. I guess you can make a tangential case for his parents standing there and watching him freak out but what the hell are the other guys just standing around slack jawed? One of them is even carrying a rifle for Christ’s sake! But he just stands there along with the others, mouth wide open. And when Michael’s endless transformation is finally said and done and he’s ready to start chowing down on his needlessly captive audience that rifle carrying idiot is ordered to “SHOOT HIM”! Then & only then does the yokel take his shot, right at Michael’s gut…big whoop. Haven’t these guys ever watched a horror movie before? Don’t they know that when someone’s head is expanding to the size of Staten Island and growing claws which he’s getting ready to tear you apart with that no shell to the gut is gonna slow him down. Shoot it in the freaking head! Not only can you not miss the shot but with the amount of air that the bladders in there are full of his head will go BOOM! 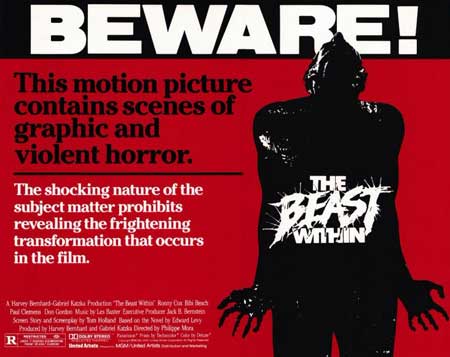 But nope, got a gut shot instead. Doesn’t slow Mikey down a whit either…just pisses him off. And he goes and savages the rest of the cast save for his parents and forbidden fruit Amanda (Who he ends up raping like his dad did his mom). And what by the way does Michael turn into? Hard to say for sure but he looks like a really ugly Garbage Pail Kid with no clothes on. He certainly doesn’t look like a Cicada as the script intimates throughout it’s running time. And Amanda’s rape serves only to hint at another Michael being born in 18 years. All of this ends up with Eli blasting Michael’s head off, I guess that’s why the knucklehead didn’t shoot him in the head earlier. A bit of pathos was missing so his dad did it instead.

Now while all of this might sound like I didn’t like the movie to you, believe me you’re wrong! I think this movie is a hoot and a half! It never really makes much sense no matter how many times you watch it and it slows down a bit in the middle but the producers were wise enough to fill the cast with veteran character actors that sell the implausibility of it all. In addition to Cox & Besch we have L.Q. Jones, Don Gordon, R.G. Armstrong, Logan Ramsey & Luke Askew acting there asses off here. Ramsey has an especially creepy scene in which he invites Michael to a meat loaf dinner which has some serious pedophilic overtones to it and he knocks it out of the park! The one weak link in the cast unfortunately is Clemens as the central character, Michael. He’s really not too terrifying at all despite the dark circles under his eyes and the green teeth. He overacts terribly during the transformation scene (Although to be fair he might’ve been directed that way) and I found it impossible to believe that Amanda could’ve fallen for such a wimpy looking kid the way she does here.

But trust me, “The Beast Within” is something of a classic of the form, it really is. They just don’t make movies like this anymore acolytes! It’s fun, atmospheric, well acted and extremely graphic. They didn’t have a problem tossing blood and guts across the set at all and as silly as it looks, the transformation scene is gripping & cringe inducing. I remember the audience screaming in fear and delight as Michael’s head just kept growing when this movie was first released. It still elicits the same reactions today to those who haven’t seen it yet, it’s a great movie to watch with a group of friends. “The Beast Within” is a really good movie that delivers the goods, but don’t try to make sense of the plot…you’ll go berserk!! Just sit back and enjoy the mayhem…you’ll thank me later.