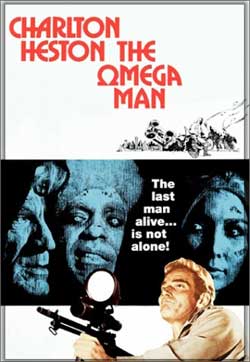 Charleton Heston stars as an army Doctor, Robert Neville, who has learned to survive a plague that has wiped out mankind. The plague being a result of a war between nations that was waged with biological weapons. Dr. Neville, having given himself an antidote which allows him to ward off the deadly illness, has free reign of Los Angeles during the day. Most of the humans were wiped out with the exception of those who call themselves “The Family.” They are albino – like night dwellers that roam Los Angeles and are violent, deformed and allergic to light. Neville being on his own must fight “The Family” off in order to survive. He hunts them by the day where they “nest” and destroys them. Despite all the effort to keep himself safe though, he still desperately searches for a cure that could possibly help the remaining “Undead.”

“The Omega Man” is the second film made to be based on the classic Vampire/Plague novel written by the incredibly talented Richard Matheson (Twilight Zone, Duel and Trilogy of Terror) called “I Am Legend. The first being the iconic, black and white, Italian production starring Vincent Price called “The Last Man on Earth.” By the 1970’s the cautionary tale from Matheson was ripe for a re-telling. Especially when having the capability to use heavy metaphor to reflect the zeitgeist of the time. George Romero’s “Night of the Living Dead” was released a mere 4 years before “The Omega Man” and Romero and John Russo singlehandedly gave us the modern “socially aware” horror film. While Sagal’s film strives to bring across the message and voice of the original source material it doesn’t quite succeed in translating that ironic twist that Matheson is so good at, especially during those heralded “Twilight Zone” years. 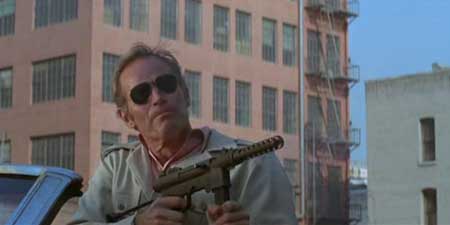 What “The Omega Man” lacks in serious and heavy handed tone is made up with very groovy and stylish action, suspense and even some character driven frivolity. In other words it’s a deep down 1970’s, balls to the wall, sci-fi cult classic. First there is a lot to love with Heston here, playing up the machismo at times, he conveys capably that he is alone, barely sane and desperate. He is just bad ass from frame one till the very closing of the movie. He screams “I’m an actor and a damn tough one” whenever we watch him do his thing with those terribly large sunglasses. Much like Vincent price before him though, Heston emotes thoroughly, how isolated he is. During the day, Neville patrols LA seeking out the resting places of the mutated albino creatures and he convinces us that he is bent on their utter destruction.

There are wide establishing shots of LA done with careful authenticity by director of photography Russell Metty (Touch of Evil, Spartacus). We watch as Neville whizzes around the city a lone figure of salvation among the empty streets. There were times where we are given some clunky photography like some crazy rack focuses and strange dolly in’s and out. Heston excels at giving us a peek into what happens to a very seasoned and tough ex–Military Doctor as he descends into madness from his isolation. At night, Neville is a prisoner in his own home as he fortifies it against “The Family” Once he even shops for a new car with us tagging along. As he wrecks it he utters the tough, one liner that gives the movie it’s chops – “There’s never a cop around when you need one.” Just bad ass. We literally watch him have the screen to himself . He even speaks to mannequins and rotting corpses.

As we progress with the story we are introduced to character actor Anthony Zerbe (Licence to Kill) as the fanatical zealot Matthias, leader of “The Family.” Matthias is the heavy here opposite of Neville. Matthias has a huge chip on his shoulder since he blames Neville for the outbreak. Zerbe is interesting to watch if not at times a bit hammy. He gives the obligatory and long winded speech while his minions destroy Neville’s apartment. “We waited for you, Neville. So you can see this! The end.” I love that line because of it’s intensity and impact. Great stuff from Matheson once again.

The beautiful, hip and sassy Rosalind Cash (Klute) plays Lisa, a survivor of the plague which is seen by Heston one day while he is out patrolling. He doesn’t end up catching her but she re-appears later to save him before he is killed by Matthias and his crew after he was caught in his wine cellar. Their chemistry is a bit forced mostly because Heston comes off very strong. Neville of course tries his best to help the survivors get well and become inoculated against the outbreak. It is a race against the clock as Neville and Lisa try to help “The Family” get cured much against Matthias’ wishes. 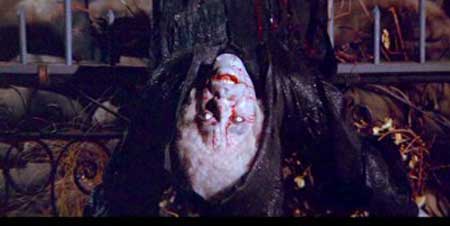 I enjoyed re-visiting “The Omega Man.” It is assuredly very dated and somewhat cheesy in parts. IE-Heston’s clothes. Surprisingly, it is a thoughtful piece of work as well. While being clunky in parts (Ron Grainer’s music being terribly annoying at times) it does have some merit even to this day. Sagal emphasizes the isolation, the loss of society and structure very well. Heston brings his A game as he goes through some dynamic emotions and hardships. Neville even achieves a sort of “Martyrdom” at the film’s closing which I found very appropriate. It is a lot of fun to re-watch this movie if one has gone a long time without seeing it. The replay value of it is limited in my opinion since it is a dated sci-fi cult classic with Heston pulling all the weight and Matheson’s allegory supplying the message.