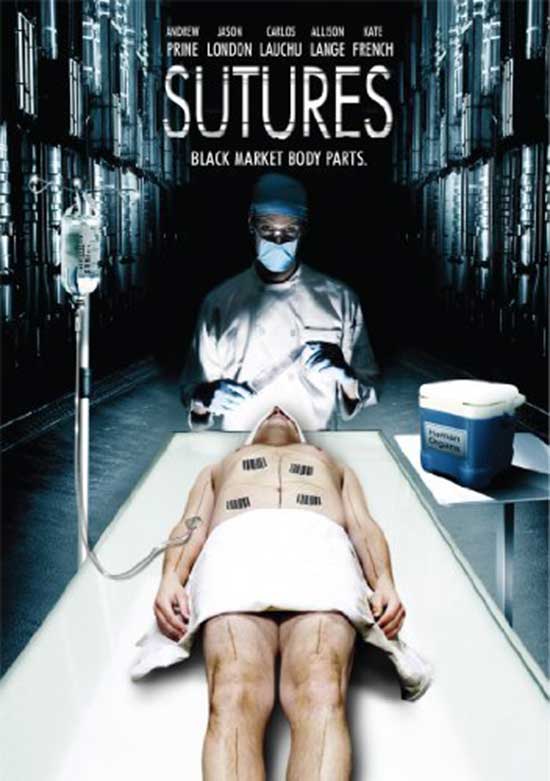 Sutures (2009) is a movie that has some seriously inspired moments with a cast that is above average in the talent department but suffers in the script department. Director Tammi Sutton pulls the proceedings together the best she can but the script, written by the team of Brian Moon, Jacqueline Kelly, and Carlos Lauchu, veers in so many directions it loses focus about halfway through, leaving us with a story that is convoluted and disappointing. Especially since there is never enough focus on the films most interesting and fleshed out character, the killer.

The film opens with Sienna (Allison Lange) escaping her captors, wounded. She eventually finds herself in the hospital, about to be interviewed by Det. Zane (Jason London) She begins to recount her ordeal to him, her and her friends take a trip to a cabin to get away and take a break from school. Once at their destination, they begin disappearing and no one knows if they are playing pranks on one another or if something is truly wrong. When they realize that they are being kept alive for organ harvesting, things take a change when our thief Alexander Tatum (Carlos Lauchu) reveals a bit of himself and he is just a collector for a much larger scheme.

For me, the film lacked focus. The script introduces us to a group of characters that are actually annoying most the time. It follows the standard slasher formula for the first half which just never really works, when the focus switches for a while to Alexander, my interest became peaked. I wonder if having Carlos Lauchu as writer, he knew that he was going to write the best stuff for himself. If the film had been told more from his point of view, I think we would have had a much different and stronger film to view. Not to mention the fact that Carlos was frightening and sympathetic at the same time. I love those types of characters.

As for Jason London, well, his character was there for only one purpose, to help in the reveal of the twist ending. I like London, but here he is given next to nothing to work with, just asking questions of Sienna. Cult icon Andrew Prine (V, Simon: King of the Witches) shows up in a small but pivotal role and chews up his scenes like a seasoned character actor should.

The majority the film is told in flashback, though several scenes were, well just kind of there. It really seemed that they were trying to add more Jason London when the scenes were pointless and revealed nothing that the audience didn’t know already. 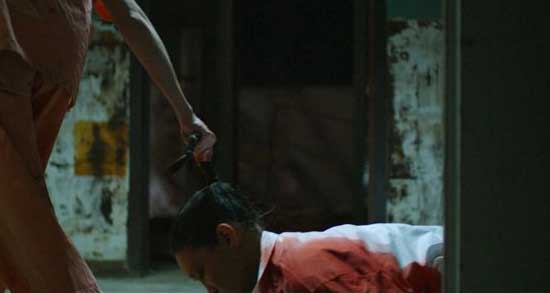 Even though the gore in the film is relatively light, it still felt at moments, especially the end, that they were trying to start a “Saw” like franchise with this. Which, if the script is MUCH MORE POLISHED, could end up being an interesting series. From a technical standpoint, for having such a small budget, the crew really pulled out all the stops and the film looks much better than it should. 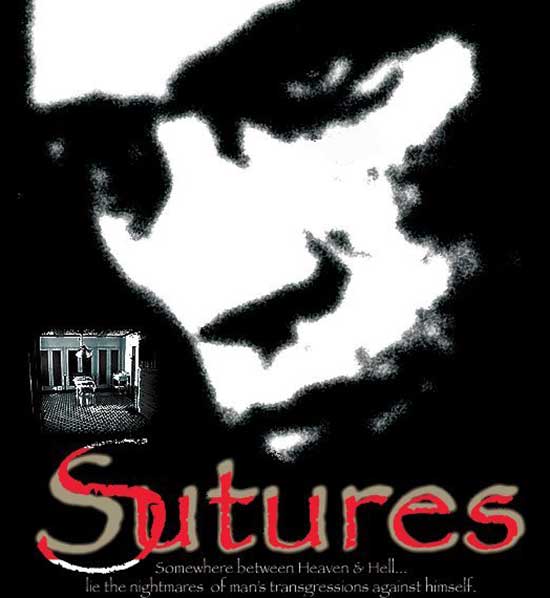 All of the elements of a solid horror franchise lie within “Sutures”. Hopefully this film will find an audience and the filmmakers will see what mistakes they made with this one and correct them. It would be a real shame to have such a great character like Alexander Tatum go to waste. I have a feeling we will never get to see this come to fruition, so we might just have to settle for this mediocre mess that introduces us to some great ideas that are almost lost in the needless jumping around that this film does. I will recommend “Sutures” mainly for the introduction of the Tatum character and I really like this Lauchu fella.

The acting is solid throughout so if you think this might be something you want to take a chance with then go for it. You could do a whole lot worse.