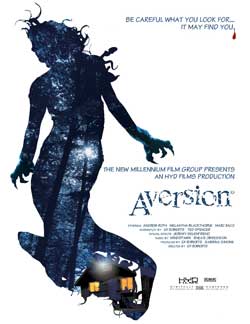 Aversion is an action-packed tale of a private investigator who discovers too late that the woman who he’s hired to follow…is possessed by a demon.

“You better keep it in your pants, boy.” Dr. Cliff

In what seems to be a tip of the hat to “Vertigo” a private detective (Andrew Roth) is hired to get the goods on whether a rich man’s hot wife (Melantha Blackthorne) is cheating on him. He tails her and find her trying to take her own life. He saves her and is soon seduced by the blonde bomb shell. He finds out that she isn’t married and his clients phone number is disconnected and that is just the beginning. The “husband” turns out to be working for a government agency and is tracking Claire.

Claire is possessed and one of 20 such demons that were accidentally created by government testing. The town is being attacked by other demons that were made by Claire, but this happens off camera. And this being a horror movie all hell breaks loose. . And when I mean all hell breaks loose I mean all sorts of hells are breaking loose. The movie changes tone and jumps back and forth between serious and very silly. Alex tries to do the right thing and save the town before it is taken out by the demons or the government. And fights with his friend Neil and a flying baby.

The movie tries for a quirky feel, but doesn’t always reach what their goal. The demon possession movements have a low budget charm, but do get a bit trying on the eyes after a while. Melantha manages to command the screen whether she is vulnerable or a demon. With just a look she can make you want to protect her.

Some of the positive points of the movie are:

• The Film Noir over tones which add a layer of depth to the story. I always enjoy a good voice over and a private investigator

• Melantha showing a very vulnerable side to her character, which shows a side to her acting skills I have never seen so strongly. You would want to protect her too.

• Melantha’s dance in the bar. A very unlikely song to be found on a jukebox, but she makes you forget that and you can understand why our hero falls for her.

• The sound and the picture quality are good.

Some of the minus points are:
*The comedy relief Ned isn’t very comedic. The background characters seem to be added for color but mostly get in the way.

*Melantha’s beast makeup looks a lot like the ones from “Demons”. Which can be a plus or a minus depending on your point of view.

*Alex’s back story really doesn’t add to the plot and seems like time waster until the next attack.

*Evil Dead camera attack. The film turns into “Evil Dead 2” for moments before getting serious again.

The movie tries hard for a low budget movie but has too many elements in play at the same time. It has a feeling of everything being thrown in but the kitchen sink. If you are a Melantha Blackthorne fan there is much to enjoy in the movie. She is very much the high light and always commands the screen when she is on it. So have a few beers, make some popcorn and save a place for me on the couch.
3 out of 5 stars.