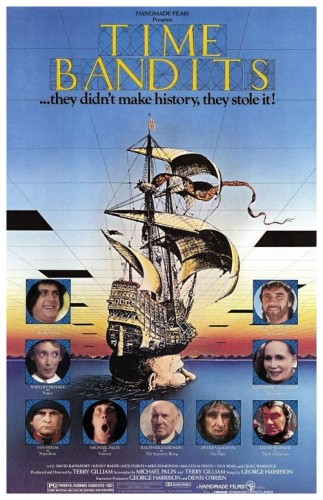 SYNOPSIS:
“A young boy’s wardrobe contains a time hole. Through this hole an assortment of short people (i.e. dwarfs) come while escaping from their master, the supreme being. They take Kevin with them on their adventures through time from Napoleonic times to the Middle Ages to the early 1900s, to the time of Legends and the Fortress of Ultimate Darkness where they confront Evil.” (courtesy IMDB)

REVIEW:
British television comedy received a good shot in the arm with Monty Python’s Flying Circus, a weekly half-hour program that ran for several seasons during the early seventies. Its style was partly in the tradition of surrealism-with-funny-voices made famous a generation earlier with The Goon Show, partly in the tradition of university undergraduate revue, the background of most of the performers. It was satirical and disrespectful, but not so much about immediate political targets as much as the general absurdity of modern life, bureaucracies and authority figures. The program elevated the ‘non sequitur’ to a new status in comedy and also specialised in blending the intellectual and the common, as in the sequence where a couple of charladies, wishing to resolve an argument, go to visit Jean-Paul Sartre in Paris: “Is Mr. Sartre free?” – “He’s been asking himself that for years.”

The team consisted of writer-performers Graham Chapman, John Cleese, Eric Idle, Terry Jones and Michael Palin, and also Terry Gilliam who produced the darkly comic animated cartoons and links, which often consisted of such cosmic injustices as huge feet appearing from the sky to squash people, or giant monster cats devouring London. When the series ended, the group reassembled from time-to-time to make movies. And Now For Something Completely Different (1971) was merely a rehash of their television sketches for the American market. The first original film was Monty Python And The Holy Grail (1974), followed by Monty Python’s Life Of Brian (1979) and Monty Python’s The Meaning Of Life (1983). Jabberwocky (1977) and Time Bandits (1981) were primarily the creation of Terry Gilliam with the help of Michael Palin and other members of the Python team, but they are so much imbued with the Python spirit that they deserve to be considered part of the Python oeuvre.

The most charming and coherent of the Python movies is Time Bandits, a violent little fable for children, at the end of which a small boy named Kevin (Craig Warnock) watches unmoved as his appallingly materialistic parents are reduced to ashes. The film opens with a moment of fantasy spirited enough to delight anyone who has anything of the child still within them. In an ordinary boring suburban house, lonely Kevin is in bed and hears noises coming from his wardrobe, out of which leaps a huge knight in full armour on a rearing frothing horse. It is a great image and could stand next to anything by, say, Jean Cocteau. The whole film gains immeasurably from taking its fantasy elements moderately seriously. The story tells of Kevin, who joins a band of six disreputable dwarfs who can travel through time, for they have stolen a map belonging to the Supreme Being (Ralph Richardson) which shows where all the holes in time are. They take Kevin along as they journey through time while trying to accumulate wealth through thievery. They come across several famous personages – only King Agamemnon (Sean Connery) is nice to the boy – and they do battle with Arthur G. Evil (David Warner), who is also after the map.

Director Terry Gilliam wrote the script with fellow Python alumnus Michael Palin, yet it’s not so much a bizarre Pythonesque comedy as much as a spectacular adventure story – the comedy is secondary. While it’s easy to see the influence of The Wizard Of Oz (1939), The Thief Of Bagdad (1940) and Alice In Wonderland (1951), Gilliam’s film is totally opposite to them in theme. In an interview with critic Danny Peary, Gilliam stated, “It is a reaction to modern fairy tales, a reaction against kids films which are wonderful but have no guts because they present children with false reassurance that everything will turn out all right. The boy does end up on his own, somewhat disillusioned by the world. Everything isn’t lovely, and you give your characters strength by having them experience some of the nastiness. I wanted to get back to Grimm.” 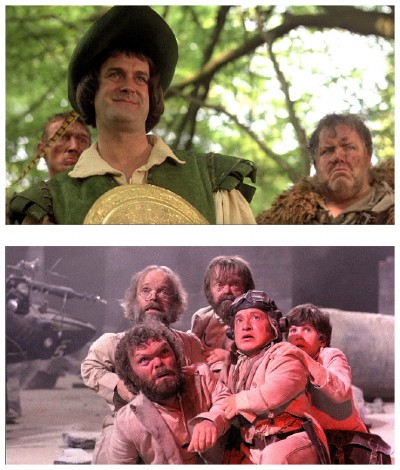 The film is extremely fanciful and ambitious, so much so it can wear out some viewers, and it might have been a good idea to eliminate one or two of the episodes. That being said, my favourite scenes include John Cleese as a pompous Robin Hood – his dialogue with dwarf leader Randall (David Rappaport) about poverty is priceless, Ian Holm is absolutely delightful as the height-obsessed Napoleon Bonaparte, and Peter Vaughan as an aging ogre trying to keep up appearances while suffering a bad back. There’s also a running gag with Michael Palin trying to propose to Shelley Duvall, who is cut short before he can fully admit, “I have an enormous…” Inspired by her experiences filming Time Bandits, Duvall created the American television series Faerie Tale Theatre, which retold popular fairy tales featuring very well-known actors and directors who gave their awesome talents to create this unforgettable series. 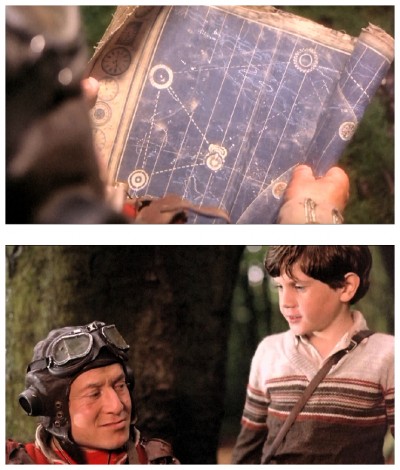 The other Time Bandits accompanying Randall include several Star Wars actors like Kenny Baker (as Fidgit), Mike Edmonds (as Og) and Jack Purvis (as Wally), as well as Malcolm Dixon (as Strutter) and Tiny Ross (as Vermin). Denis O’Brien and George Harrison were executive producers, with Harrison supplying the songs heard in the film. Time Bandits may not be Gilliam’s best film but, surprisingly for such sophisticated creators, it does have an incredible sense of wonder about it. The Python group have since gained a worldwide cult following and have remained popular, despite refusing to make another Python movie since the unfortunate passing of team member Graham Chapman, who would usually play the central character and ‘straight man’ in the films (King Arthur, Brian of Nazareth). It’s on this rather sad note I’ll politely request your presence again next week when I have another opportunity to give your cinematic sensibilities a damn good thrashing with the ugly stick for…Horror News! Toodles! 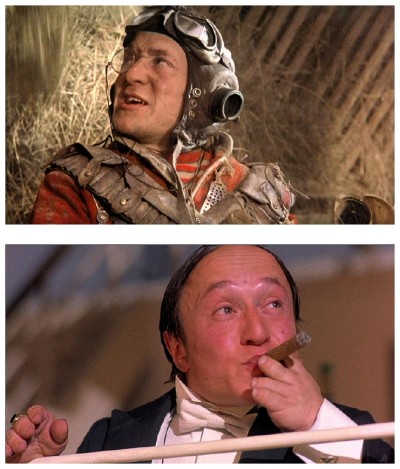