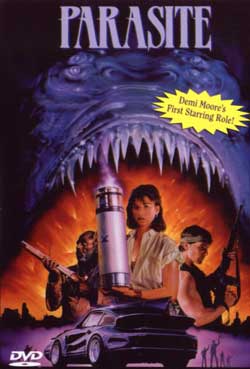 Paul Dean has created a deadly parasite that is now attached to his stomach. He and his female companion, Patricia Welles, must find away to destroy it while also trying to avoid Ricus and his rednecks and an evil government agent named Merchant.

In a shoddy 3-D post-apocalyptic world where let’s face it, damn near every Sci-Fi/Horror flick from 1977 to 1989 or so was set, scientist Paul has created a deadly parasite that attaches itself to his stomach. Nice going, Einstein. Anyway, now he and his sidekick – a very young & lovely future Mrs. Ashton Kutcher (I still can’t get used to saying that…blech) must find a way to destroy it without turning his guts to chop suey all while avoiding a pack of violent desert rednecks and an evil government agent that comes across as half Terminator, half Cigarette Smoking Man. Sadly, it sounds like a much better time than what it actually is. 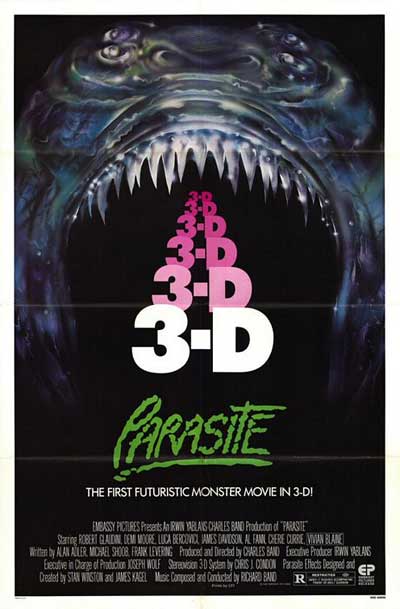 Now, that last sentence up there could possibly be taken wrong. Not so much out of context, but there once was a time when I totally ate these movies up. I was 12 when this one came out and hell yeah, I snuck in to the theater to see it. Thanks to cheesy sh*t like SLITHIS and DAMNATION ALLEY, I was already building up my taste for the impending end of the world when we push nature and science too far schtick. Not to mention, this was my first theatrical 3-D experience. Oh, and the allure of a very nubile Demi Moore certainly didn’t hurt either. Come to think of it, she was my main reason for going in the first place. 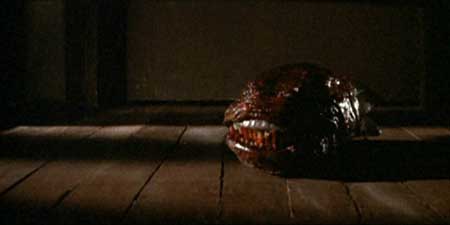 PARASITE was, is, and always will be one of many hundreds of low-budget ALIEN ripoffs that crowded theaters and video stores throughout the 80s. If I had to list 30 off the top of my head right now, I’m sure I could do it without hesitation and most of those flicks I haven’t seen since their original run. Sometimes sh*t…good AND bad sh*t…just sticks with you for a lifetime. But this particular flick, epic cheese or not, has several distinctions attached to it which nowadays actually makes it legendary in some ways. 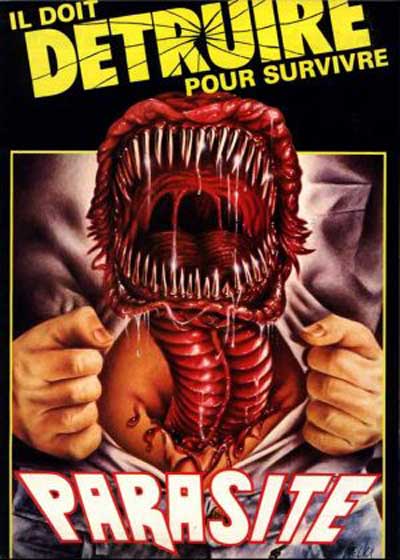 It was the first of these types of movies to my fuzzy memory to be given to us in 3-D in a great while, whether the 3-D actually was that good or not…and it wasn’t. It was the first true starring role of the young Ms. Moore, who would go on to be a major movie star for decades to come as well as be the fiancé and wife of some of the biggest male stars of the time. It was the first major box office hit for director Charles Band, who would go on to write, direct, and/or produce some of the biggest “guilty pleasure” horror movies of all time under his Full Moon banner. And, twas the first major sci-fi/horror release to showcase the Godlike creature designing talents of the late, great, Stan Winston. Not too shabby for a low budget ALIEN ripoff, huh? 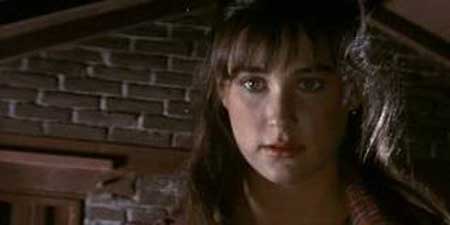 Now, for the not so good news. It really hasn’t held up to the test of time like some movies from that day have for me. I can’t bash this flick because I simply don’t hate it; I don’t really like it that much anymore though either. Yes, there are some very inventive kills for the time, and have I mentioned the lovely Demi Moore? Okay just checking…so it still has that going for it. But, reliving it for the first time in well over 15 years to review here made me realize that in many ways this flick will always be special to me for the experiences I had just getting into the damn theater at my age to see it, as well as from a geek standpoint for all the cool careers this little movie spawned. As far as me enjoying the movie anymore though as a movie itself and not just a trip down memory lane, I’m kinda “meh” about it. It’s still available on DVD at most fine online retailers though, if you are a fan and didn’t know that or simply curious to see what it’s all about, it’s certainly worth the $3.00 for a used copy to satisfy your curiosity. I can’t be too hard on this one though…much like Cousin Eddie it may be a little slow at times, but still always finds a way to worm itself into your heart.