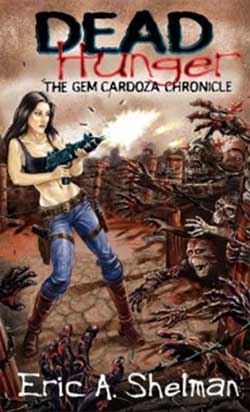 DEAD HUNGER 2 THE GEM CARDOZA CHRONICLE
By Eric A Shelman

A clever, witty sequel pitting our vigilante survivors grappling with the continuous zombie plague in modern American society; it’s within the first person narrative this time from Gem Cardoza’s perspective. For those not yet privy to The Dead Hunger trilogy, Gem is the bad ass, shoot now ask questions later female companion of Flex Sheridan who told his own story in the original.

Our harrowing tale of impending doom and dread resumes where Sheridan’s chronicles left off. Gem is staying with Uncle Rogelio and Aunt Ana in attempt to restore some sort of grasp in normalcy among a world gone bad. Waking early one morning Cardoza’s sheer terror begins to unfold as she witnesses her beloved Uncle making a meal of Aunt Ana. Acting on instinct she brains the one she loves to thwart the grisly attack to submerge deep within the heart pounding action of being on the run once again.

She unites with Flex, niece Trina, Hemp and Charlie as they plot to move to Alabama in search of a secure research facility. Hemp’s scientific and bio-chemistry prowess renders him confident that not only can he find the cause of the undead virus that created the epidemic but ultimately a cure as well. He goes so far as examining how the undead are able to find them seemingly at the most precarious times deducing to a theory that the zombies are capable of picking up a scent for human brains. This explains their insatiable appetite for grey matter. A BSN helmet is devised to throw the walking cadavers off their course as they vow to strengthen their group in numbers.

They reunite with Max, Hemp’s colleague, Cynthia and her daughter. The band is short lived however as Max is attacked at a local department store to everyone’s disdain.
What is truly admirable about Shelman’s efforts this time around is his ability to maintain a fine balance between the emotional aspects as depicted by one Gem Cardoza as well as a healthy serving of scientific lingo from the tenacious Hemp. It’s not an easy feat to first of all write from a first person perspective and deliver it in an innovative, fresh and entertaining manner. Shelman executes this flawlessly evidence he’s well in tuned with his characters and is capable of delivering genuine, raw emotion from the opposite sex perspective. His ability to tug on the heart strings of you, the audience is shades of Stephen King’s Gerald’s Game or perhaps Dolores Claiborne. We cannot help but cheer on our protagonist in their quest to restore a civilized society. I particularly enjoyed Shelman’s reference to King’s The Stand in comparing how society fares after an apocalyptic like event. People show their true colors whether it be unifying, divided we stand or developing their own sinister agenda evidence that there is nothing like a social disaster to separate the men from the boys so to speak.

Hemp continues his experiments under the theory that a deadly gas has created a fissure affect from the earth’s core ultimately the cause of the walking undead. He tests his hypothesis of Urushiol being able to halt the undead. Sure enough when the gas is diluted it evolves into a formidable weapon of mass destruction obliterating armies at a time of the undead. The timing could not more apt as the band soon realizes that they must cope with not only the walking undead but fissure has enabled each of the local cemeteries to be gradually unearthed as well.

As a cohesive, diplomatic unit our protagonists decide it’s time to get on the move again, heading for New Hampshire. Their sense of moral and societal philanthropy prevails. Before they’re able to deploy their vagabond mission, Gem commits the unthinkable as she attempts to console and communicate with one of the undead. A test subject in restraints stares at her with eyes void of any concept of human soul. Cardoza feels compassion and empathy towards the subject and even attempts to caress the cadaver’s head. As a result she’s bitten for her efforts and is suddenly less one appendage.

In rising tension of our chronicle we’re shown more and more of a caring, nurturing side. Our audience is captivated in suspended belief as each predicament unfolds in realism . We’re invited into the interpersonal relationships of Flex, Gem, Trina and Hemp with Charlie. The children even further emphasize the necessity of a stable environment and civilization. Shelman’s grasp of character interaction in real life circumstances truly shines here as the reader is treated to a more memorable, realistic tale head and shoulders above the typical blood, gore and guts of typical inferior zombiesque folklore.

As our tale begins to wind down the troop makes a stop in Louisville, Kentucky discovering an abandoned church. Here we’re introduced to a plethora of new characters having survived their own personal hell. Together with Dave, Lisa among many others we’re delivered unto an endearing climax with a theme of a brave new world, a touching conclusion that you’ll simply have to check out for yourself.

Although very different from its predecessor Gem’s chronicles shine in its own right as we peel back the proverbial layers of social psychology and learn what our characters are truly made of coping in a surreal society. Fear not chiller fans we’re still treated to an abundance of bludgeoned brains, blood and good old fashioned gore to rival Flex’s chronicles. The formula Gem’s installment is a formidable balance with the end result having a little something for even the most discerning of readers.

Dead Hunger 2 is an epic saga in the works that renders Shelman’s army of readers restless in anticipation for a possible third chronicle.