“Jimbo is thirteen and he has a crush on Sarah Jane, the girl of his dreams. She still doesn’t want to hear of him. But Jimbo is persistent. He will make Sarah Jane fall for him, no matter how long it must take. And what does he care if he lives in a post-apocalyptic environment? If all the adults are dead? If the place is infested with zombies? Jimbo loves Sarah Jane. That’s that.” (courtesy IMDB)

Filmmaker Spencer Susser has made a name for himself as an award-winning director of commercials and music videos. After traveling to Australia to record the making of Star Wars II: Attack Of The Clones (2002), Spencer forged a relationship with the local industry and became part of the media collective known as Blue-Tongue Films. His short film I Love Sarah Jane (2008) starring Mia Wasikowska, won Best Narrative Short at the Nashville Film Festival, the Reel Frontier Merit Award at the Arizona International Film Festival, and the Canal+ Award at the Clermont-Ferrand International Short Film Festival. It proved so popular that Spencer is currently developing a feature-length movie based on the short. The short is four years old now, but features a now-recognisable name in Mia Wasikowska along with relatively unknown talents like Brad Ashby, Valdimimir Matovic, Beau South and Peter Yacoub. Since then, Spencer’s feature film debut Hesher (2010), starring Joseph Gordon-Levitt and Natalie Portman, was eventually released in America in May 2011 after making a big splash at the Sundance Film Festival the year before. The following is an edited extract from Wholphin DVD Magazine #10 (2009) in discussion with the director:

“When I was about nine I had the movie poster for Return Of The Living Dead (1985) on my wall. I don’t think I actually saw the movie, but I loved the image on the poster and always wanted to make a film with zombies. I’ve always liked zombies and the idea of them, but I wouldn’t say I’m a huge fan of the genre. I actually hadn’t seen that many zombie movies before I made this film, but I felt that in the ones I had seen, the story always seemed so big. It was about figuring out what had happened and ‘How are we going to survive?’ and ‘How are we going to fix it?’ I thought, what would it be like if there really were zombies? What would it be like if the Bird Flu or Swine Flu or something like that spread, and there was no cure, so sick and dying people were everywhere? And what if not everyone was sick and, for those people, life had to go on and, even better, what if those people who didn’t get sick were kids? This is where I started and then I got excited about the idea of this new world that feels a lot like the one we know, but where circumstances are very different. So I had this idea of doing a feature that explored that world. I wanted to pitch it, but I think one of the hardest things to explain is tone, and the best way to do it is to show people, so I created a fragment of the world in a short and I’m using it to pitch the feature which, hopefully, I’ll get to make some day.” 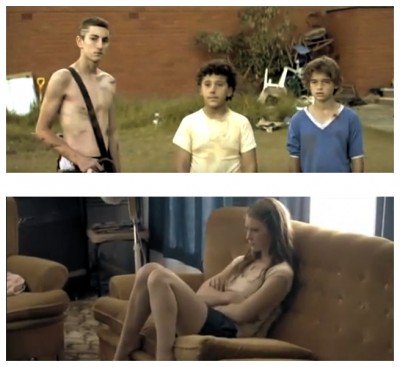 “Mia Wasikowska is awesome, she’s so talented. A while ago I saw a film called Suburban Mayhem (2006), Mia was in it and had a very small part, but I remember seeing her and thinking, ‘Wow, that girl is something special’. I had been waiting for an opportunity to try and work with her. I didn’t know her but we sent her the script, and I told her how much I liked her work and that I would love to work with her if she liked the script. I feel very lucky that she did and said yes. I can’t wait to see her as Alice in Tim Burton’s Alice In Wonderland (2010). I know she’s going to be great!” 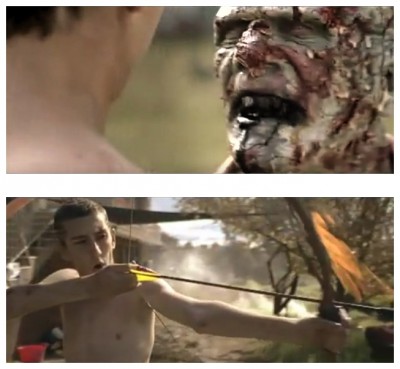 “I’m a big believer in doing as much as you can in-camera. We made a hollow arrow and ran piano wire down the centre of it that ended at the zombie’s feet. That allowed us to safely ignite the end of it and have the young actor actually shoot it. I then shot a plate of a real explosion, and various plates of exploding zombie body parts all to be composited later. Unfortunately, we had some technical issues. We were shooting digital using the Viper camera, which was new to me. Not having much experience with the Viper camera, while changing the frame rate, we did something wrong. The footage came out purple. Not just purple hue over our explosion footage – no details whatsoever, just a purple screen. So we shot an explosion at the location in-camera, but found out later that we didn’t actually capture it.”

“I had to go back at the end of the shoot and reshoot the explosion element. Of course we didn’t have any money left, so we ended up doing a guerilla-style run-and-gun shoot. Three of us went out to a football field, the plan was to film the explosion quickly, put it out safely and get out of there before anyone knew what was going on. So there we were in this field with a camera, tripod, pyro, etc. waiting for an old lady who was walking her little dog to leave so we could shoot our effects element. Once she was gone, boom! We got our shot and quickly got out of there. We used the element in the composite to make the final shot. Gotta love low budget!”

Blue-Tongue Films, established 1996, is not so much a production company or business, but simply a loose group of friends who look to each other for help and inspiration. Nash Edgerton, a seasoned stuntman of many blockbusters, formed Blue-Tongue with his actor brother Joel Edgerton and Kieran Darcy-Smith, fresh out of drama school. Their ranks have grown to include David Michôd, Luke Doolan, Tony Lynch and Spencer Susser, the lone American among the Aussies. The members of Blue-Tongue are typically scattered across the credits of their films. Edgerton’s gritty feature film The Square (2008) came out to very strong reviews. Doolan’s short film Miracle Fish (2009) was nominated for Best Live Action Short Film Oscar. Darcy-Smith recently wrapped shooting on his feature directorial debut, Say Nothing, a psychological thriller that has yet to be released. David Michôd wrote and directed Animal Kingdom (2010) starring Joel Edgerton and Darcy-Smith, edited by Doolan and includes special thanks to Nash Edgerton.

Short films have remained the group’s training ground, a way to get their names out there, prove themselves capable to investors and get familiarised with directing. Doolan and both Edgertons recently completed several new shorts, including Bear (2011) which is a sequel to his darkly comic Spider (2007). More than anything, Blue-Tongue functions like a support system. They share each other’s scripts, seeking constructive feedback. When one succeeds, it only makes the others more confident that they might be as well. Their films share a gritty realism. They constitute one of the most exciting, hard-earned movements in years. Film Comment hailed them as the next ‘New Wave’. It’s inspiring to see a group of filmmakers, thousands of miles from Hollywood, striving for years to build themselves into feature film directors, many of them arriving with their first movies at once.

You can view I Love Sarah Jane on Youtube at www.youtube.com/watch?v=gYxs7Y7ulrM and, if you like what you see, you can find the film available on a couple of different DVDs. I originally found it as part of Wholphin DVD magazine #10 – www.wholphindvd.com/issues/wholphin-no-10/ otherwise you can simply head for the official website at www.bluetonguefilms.com/ for more information. I’m sure you’ll agree that this is one of the very best short zombie movies ever made and, having been proven right again, I’ll take my leave of you, trusting to see you again next week when I have the opportunity to scoop out your brain and drop it in a bucket with another spine-tingling journey to the dark side of short-filmdom for…Horror News! Toodles!