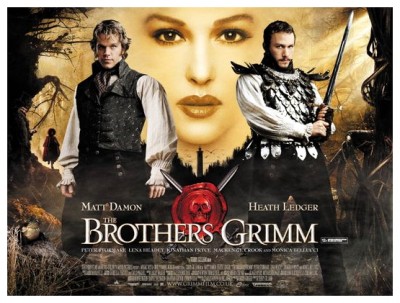 “In 1811, in a French occupied Germany, the crooks Brothers Grimm pretend to fight against evil witches and monsters to make money. However, they are arrested by Cavaldi and General Delatombe, but they have a chance to redeem themselves in the village of Marbaden, where ten young girls have vanished. Will and Jacob are guided by the local Angelika through an enchanted forest where they face the evil Mirror Queen that depends on the sacrifice of twelve girls in the eclipse to stay beautiful and young.” (courtesy IMDB)

The Brothers Grimm (2005) is a swashbuckler of limitless invention. In the film’s opening sequence, an emblem of childhood whimsy – the leg of a wooden rocking horse – gets hurled into a fire, giving some temporary warmth to an impoverished family. This fleeting action represents the themes at the movie’s core: The rationalisation of fantasy into science and the deconstruction of imagination into logic. Wilhelm Grimm (Matt Damon) and Jacob Grimm (Heath Ledger) are a couple of traveling con-artist brothers who move from village to village, pretending to destroy evil spirits using their own elaborate stage props. The French military, wise to their scam, follow their trail and forcefully recruit them as ghost-busters for a town besmirched by black magic from a neighbouring cursed forest. Unfortunately, the forest is genuinely enchanted, and the brothers gradually discover the hideous magnitude of their task. Wilhelm is logical and pessimistic: As the forest literally comes alive, he scoffs, “These people are much better funded than we are.” On the other hand, Jacob is quick to believe in something greater.

Sublime photography gives the film a rich handsome surface, and almost every frame is itself a gorgeously rendered portrait. Ledger and Damon are a joy to watch and the script shrewdly incorporates a mishmash of fairy-tale mythos spread across a landscape of legend and folklore. The Brothers Grimm is fresh, funny and inventive, wired together with director Terry Gilliam‘s typically atypical artistic audacity. I was lucky enough to run into the elusive filmmaker at the Toronto International Film Festival while presenting his other film that year, Tideland (2005). “By the time The Brothers Grimm came along I was in the middle of a pretty big depression. I thought I was never going to make a movie again. Four different things didn’t happen in that time, and then Quixote collapsed again, so I felt that I really had to get back to shooting. I wasn’t certain about Brothers Grimm, but I’d reached a point where I had no f*cking clue about who I was anymore if I wasn’t working. You start to lose confidence in your abilities.”

Even so, he admits that he didn’t rush into the film with the script as it was. “I didn’t like it. It was written by Ehren Kruger and it felt like two contemporary Hollywood guys going back to ye old Germany. It had that smart-ass quality that American films have now, where people are commenting on the world all the time, as opposed to being in that world, and I hate that. What I liked about the script were two things: The premise was interesting – two con men getting caught-up in a real enchanted world; and a couple of the magical moments were good.”

Despite sounding like a perfect fit for the director, The Brothers Grimm didn’t turn out to be the confidence-booster that Gilliam had hoped it would be. He felt that the weight of the US$80 million budget every moment of every day. It was also a project that would inevitably involve the usual behind-the-scenes battles that have plagued every Gilliam project to date. For instance, while he and Tony Grisoni rewrote the entire script, they were refused credit as writers on the film. “The Writer’s Guild of America has very strong ideas of who gets credited. So me and Tony invented a credit for ourselves. Dress Pattern Makers. There’s something about trouble that gets my adrenaline going and sometimes, if I don’t have anything to defend, I lose focus. It’s a big expensive movie and, when you get big expensive films, you always have lots of fights.”

Even more so when you’re up against the notoriously tough Weinstein Brothers, whose Hollywood battles are almost as legendary as Gilliam’s. For instance, Gilliam wanted Samantha Morton for a major role, while the Weinsteins wanted British actress Lena Headey. Headey got the role. Then there was the battle over Matt Damon wearing a prosthetic nose – Gilliam wanted him to look like a young Marlon Brando. That didn’t happen. Then Nicola Pecorini, Gilliam’s original director of photography, was then sacked for working too slowly. By the time producer Charles Roven was ‘navigated’ off the project, it was clear the Weinsteins were winning the battle.

Gilliam’s theory was that the Weinsteins were trying to eliminate his ‘support system’. Maybe so but, if they were, it didn’t have the desired effect because Gilliam didn’t crumble and he refused to quit. “Every film reaches a point where the filmmaker and the studio come together and they realise they’re talking about two different films here. All along they had a completely different image in mind than I had. I didn’t want to make a compromise. The Weinsteins are very good fighters, very aggressive, but so am I. I thought this could be a disaster, with us fighting. We would kill each other. So I said, ‘Okay, I’ve got this other film I’m supposed to be doing, Tideland. I’ll go do this and then we’ll get back together and talk again’. So I did and, while I was editing Tideland, I got a call and they told me, ‘Why don’t you finish the film your way’.”

And he did but, on its release in the USA, The Brothers Grimm was almost universally panned. “I’m not interested in the people who dislike my films. I make my films for the people who like them. They’re the enthusiasts. The rest of the people just want to be entertained and are lazy about watching films. Fuck ’em.” The critics were also less than impressed with Damon and Ledger in the lead roles. “They’re fantastic together, the way they bounce off each other is just breathtakingly good.” And that’s despite them both being Gilliam’s second choice for both lead roles. It’s becoming a running joke on any Gilliam film that Johnny Depp is always Gilliam’s first choice – and this one was no different. “Of course I asked Johnny if he’d do the film but he was busy doing something else, so that was it.”

At the end of the day, despite disheartening reviews and battles endured, Gilliam insists he had a great time making The Brothers Grimm. “That’s the only way to do this stuff, is to enjoy it.” With that wise advice in mind I’ll now take my leave of you, trusting to see you next week after I have scraped the bottom of Hollywood’s barrel to find another rotten apple to throw at you from…Horror News! Toodles! 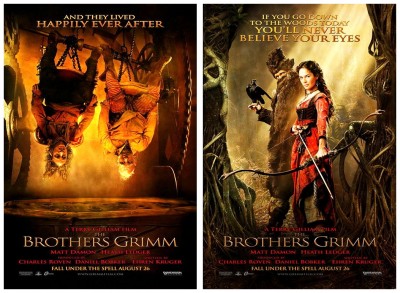