Behold the trailer for CAMEL SPIDERS 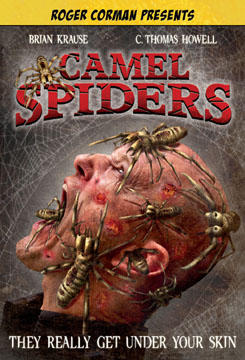 I know what you’re thinking. What the hell is a CAMEL SPIDER?

Right? Lucky for you I am here with at trailer so you will soon know everything you would ever need to know.

This one looks like a SYFY channel special if I’ve ever seen one.

March 27th is the release date on this one. It’s gonna be a spider killing good time!

During a routine desert patrol, an U.S. Military unit head by Captain Sturges (Krause) is ambushed by insurgents. Just when they seemed to be outgunned, the attack suddenly stops…and their would-be assassins are dragged off by what a native liaison calls “the devils of the sand.” Wounded in the battle, Sturges earns a ticket back home to the more hospitable deserts of the Southwestern United States.

Bringing back one of his fallen comrades, Sturges doesn’t realize that a couple of camel spiders stowed away and now have access to an environment where they can breed at an exponential rate, freely hunting for prey and unafraid of any predator – including man.

No place is safe, no one is beyond their paralyzing sting. In the end, a small band of hearty fighters are forced to make one last stand against the creatures.