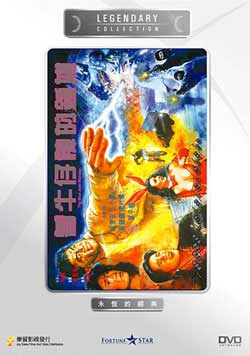 A cop is killed in the line of duty, only to be reanimated by a freak event involving a black cat and a lightning bolt. Now he’s got to act normal, despite the fact that he’s a living corpse who needs to recharge with energy in order to function!

Look, I’m in a hurry, I’m all frazzled, I don’t know what to do, I’m running around like a chicken without a head….because….I got a date! I paid my friend $25.00 to force his sister to go out on am movie date with me and I am very excited! It’s been awhile since I been on a movie date ya see. Well, I did take a lady out to see SPLICE, but she was old and not as cute as my pals sis! So I gots lot to do, mental preparation, got to work extra hours to have enough money to buy her a nice dinner, and work out physically to trim my fat ass down so I don’t gross her out too much.

She all ready calls me Igor after Dr. Frankensteins assistant! No kidding’! But she’s real cute and I gotta keep her happy, who knows, she could take off with a cute guy before we even share a bowl of chips and salsa! so I gotta hurry up with this review. And what does BLUE JEAN MONSTER have to do with any of this? Well, nothing really, but I got to pad out this review with something don’t I, and….well, I would never take her to see BLUE JEAN MONSTER, if they happened to be showing it on Asian movie night at the Alamo Draft house one Thursday. Unless I thought a 90 minute make out and feel up session was possible but NO WAY! She is kind of intimidating and her brother would kill me! No BLUE JEAN MONSTER is a movie I would more than likely go see by myself….on a weeknight….in a empty theatre….with a basket of chili cheese fries and glass of root beer….wondering how I reached this point of crippling loneliness in my life. But still manage to eek out some enjoyment from going to see a sci-fi, action, horror, comedy called BLUE JEAN MONSTER.

I was going to make a big deal out of the ridiculous and totally inappropriate title but the name of this movie in it’s original language is JEUK NGAU FOO DIK JUNG KWAI. So almost anything in English is better than that. Go ahead, just try and say it! So yeah, BLUE JEAN MOSTER is a 1991 Hong Kong hybrid of genres but mostly patterns itself after the Joe Piscopo, Treat Williams action/zombie/comedy DEAD HEAT with a little bit of TERMINATOR thrown in. And to get off the subject, I like DEAD HEAT, alot of people bash it but I think it’s a fun movie. It certainly has more zombies, special effects, and action than BLUE JEAN MONSTER. Plus DEAD HEAT has Vincent Price! Can’t go wrong there, can you?

But BLUE JEAN MONSTER is not a horror movie, not really. Oh, it lulls you into believing it’s going to be a horror movie for about the first twenty minutes or so but it’s not. it’s more a Hong Kong action movie than a horror movie, hell, it could be considered a action/comedy more than a horror movie. It has a bank robbery as it’s first action scene and it is pretty brutal and merciless and Hong Kong bank robbery scenes usually are. The star of BLUE JEAN MONSTER is Fui – on Shing, and if you don’t know him by name that’s cool but you might know him as the lead baddie from John Woos THE KILLER. Yup, that dude. But he does a good job as a good guy, I like him! And it’s obvious they used him because he is pretty ugly and can make some evil looking facial expressions when he is full on evil and scary zombie cop. And the plot of BLUE JEAN MONSTER, you ask?

Well, Fui-on Shing plays Tsu, a married cop who is expecting his first child, and if you did not know the first born male child is very important in Asian culture, but it’s important in every culture I guess, but this is really important to Tsu, so  important that when he gets shot up by bank robbers and crushed by falling debris he comes back from the dead to catch the criminals that did this to him and see the birth of his son. And the way he comes back is stupid I guess, it seems it’s through a combination of sheer will power and when a cat jumps on the pile of junk on top of him and glow red then a electrical pole falls on the pile of junk and shocks him back to life. Why did the cat start glowing and how did it bring him back to life? I have no idea, but the effects during this scene look great, they are pure 80’s style special effects, even though this movie is from 1991, but I liked them, and if you like 80’s movies you will like them too. 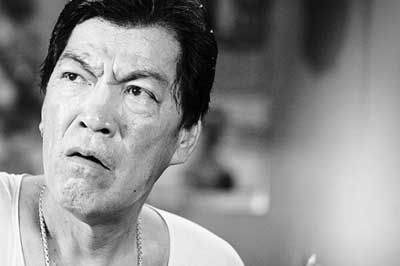 Since I am a big fan of Hong Kong action movies, the look and feel of BLUE JEAN MONSTER felt very familiar and I get the humor and culture but if you are not familiar with the Hong Kong style of films BLUE JEAN MONSTER is not the one to start with! There are characters with names like Gucci, Power Steering, and Death Rays! And Death Rays is a woman and she is not called Death Rays because she shoots deadly lasers out of her eyes ( which would of been really cool ) or because she is an assassin or something like that, no, she is called Death Rays because of her devastating good looks and killer set of big hooters!!!! And Death Rays is played by Amy Yip! Amy Yip is a Hong Kong movie star mostly because of her amazing chesticles, and yeah, they are fake but I like to think that if you can touch them then they’re real! But they are big and she is really cute but I have read that she never actually reveals them, just shows as much as she can without showing her nips or totally exposing them. And she has been in alot of cult movies but this is the first time I have ever seen any of her movies so this is the first time I have ever seen her onscreen so it was worth it just to see her! You should start your own Amy Yip movie collection as well! Look for HAUNTED JAIL HOUSE and ROBOTRIX, and ROBOTRIX sounds pretty good!

So if you are wondering where the horror element of this flick comes from, (and even if your not) there are scenes where Tsus eyes grow red and I’m not sure if he is succumbing to the evil inside him or he is slowly dying, I guess ‘cos he’s dying because he has to shock himself with electricity to get back to normal, or as normal as you can be when you are a sentient zombie. And there is a scene where he is eating noodles and they come out of the gaping gunshot wounds in his stomach and he puts them in a bowl and his friend, Power Steering eats them! The effects are cheap but effective and the wounds he has look kind of gross but played comedically and come early on in the film. BLUE JEAN MONSTER combines alot of stuff into one movie but I felt it should of had more shootouts, fight scenes, and cheesy special effects, or try to add in more of a horror element, but I still found it enjoyable, it didn’t suck and I might actually watch it again. 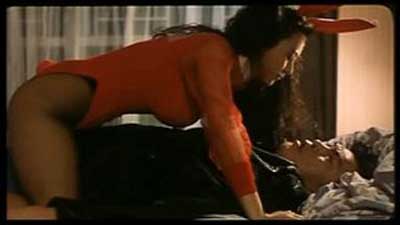 I red a few other reviews and all the ones I red, (okay, I only found 4 reviews for BLUE JEAN MONSTER) really liked it and called it a crazy, wild, must see one of a kind flick. I wouldn’t go that far, and if you have yet to see SAMURAI COP, KICKBOXER FROM HELL, and LADY TERMINATOR these movies fit that description and go beyond the normal experience of watching a ” so bad it’s good movie” But BLUE JEAN MONSTEER comes close, it is a fun flick. But don’t’ expect EVIL DEAD II: Dead By Dawn, BRAINDEAD, STREET TRASH, or BAD TASTE, or other Asian films like ROBOGEISHA, VAMPIRE GIRL VERSUS FRANKENSTEIN GIRL, GOTHIC AND LOLITA PSYCHO and NINJA VERSUS ALIEN. Man, can’t wait for these movies to get a American release!

But if you are deep into the Hong Kong stuff and just have to get BLUE JEAN MONSTER it sucks because this has not gotten any sort of U.S. version be it VHS, laser disc, or DVD. I do not remember seeing it on the lists of any of the bootleggers I order from but I might just check again. And if you do have a regionless DVD player are you going to hunt down a region 3 DVD of BLUE JEAN MONSTER and pay whatever outlandish asking price? Well, if you are like me then, yeah, but the only thing holding me back from totally recommending it is that it is really not a horror movie but if you like all these crazy low budget and foreign genre flicks it is worth a viewing. Finally, after reading my reviews I really hope you get in touch with me through my myspace and lets be friends!