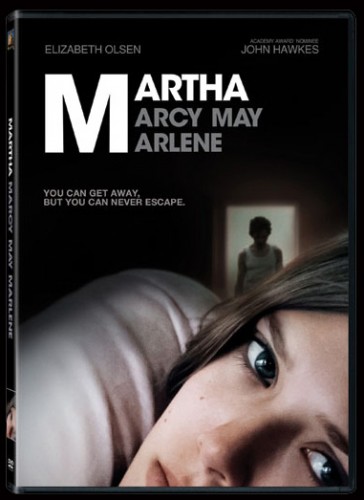 HORRORNEWS.NET IS READY TO GIVEAWAY TWO COPIES OF MARTHA MARCY MAY MARLENE FOR FREE!

To enter — email joyhorror@horrornews.net with your full name and mailing addresss.  In the subject line all you need to put is ” MMMM Giveaway ” and you will be automatically entered.  This contest is for residents of the United States and Canada ONLY.   Good Luck!

GET CAPTIVATED BY ELIZABETH OLSEN IN THE GRIPPING PSYCHOLOGICAL THRILLER

After escaping from a dangerous cult and the watchful eye of its charismatic leader, a young woman named Martha (Olsen) tries to reclaim a normal life with her family. But the haunting memories from Martha’s past trigger a chilling paranoia — and nowhere seems safe as the fragile line between her reality and delusions begin to blur.

Supported by unforgettable powerhouse performances from Academy Award® nominee John Hawkes (Winter’s Bone, American Gangster) and Sarah Paulson (Down With Love, What Women Want), the MARTHA MARCY MARY MARLENE Blu-ray and DVD is rich with feature special features, including “Mary Last Seen,” the chilling short film by writer/director Durkin that started it all.

The Making of Martha Marcy May Marlene

A Conversation with Filmmakers

The Psyche of a Cult