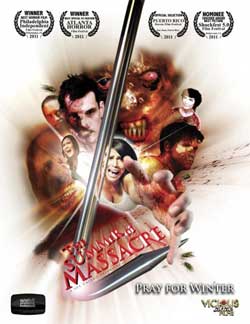 Hold onto your barf bag. You might need it by the end of the film as you view the slicing, tearing, ripping, gashing, stabbing, impaling, beating, squishing, choking, burning, staking, cutting, hacking, dismembering, decapitating, hanging, bashing, dicing, chopping, crushing, pounding, spearing, scalping, suffocating, deaths the psychotic serial killers hand out to anyone that is in their path of vengeance.

Holy Crap! …..and by saying that I don’t mean either. This is one messed up movie. Now being in the business, it takes alot to surprise, seeing that viewing horror movies is as common as watching the news (for us horror sites). I’m gonna say this right now before we go any further in this review “Joe Castro” is the New king of Gore! Move over Herschell Gordon Lewis (respectfully) (who also seems to be a huge inspiration to this young fellow), but man, what a tidal wave of extreme gory nutbag-a-try (note: just created new word) 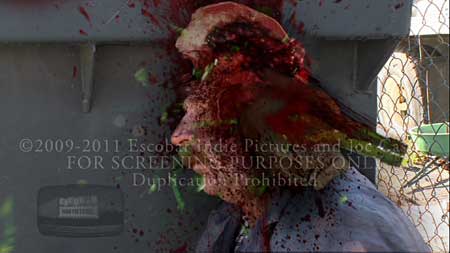 It doesn’t take any marketing ploy what so ever to say that this film easily houses more kills in its first 15 minutes than the entire “Friday the 13th” franchise. One of the synopsis’s mentions that the film includes 8 unstoppable killers. But you might be hard pressed to pin that idea down seeing that its just non-stop killing front to back.

This review intro might start first with simply who is “Joe Castro” and where did this madman crawl out from under? Upon research Joe has been in the special FX business for quite some time, churning out FX gags after gag for even the likes of Hershell himself. In a much earlier interview we profiled the man in one of our FX shop columns. Though with all that he’s contributed to, I think “The Summer of Massacre” might just be the pinnacle piece for him and his imaginative instinct for macabre.

The first 15 minutes opens pretty much without cause or reason. A news reporter is in mid coverage reporting on the chaos outbreak. Shortly after, the film breaks into a “psycho lullaby intro” unlike any you’ve seen. 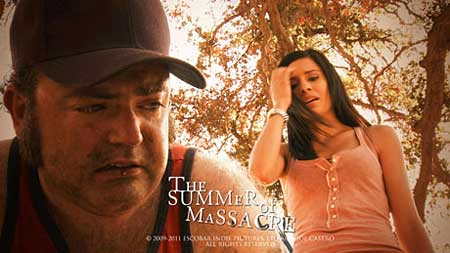 Our first player heads out for a night time jog. Upon getting mugged and slashed ear to ear he just simply “freaks out”. Not the kind from trauma, but instant transformation into a maniacal slasher, butcher….well you name it. A girl who calls for help (to his aid) gets stabbed, choked, and head smashed in (for no reason). Our slit-faced madman now in full throttle annihilation mode continues on just simply slicing, dicing, smashing and dismembering everything in sight. Again no reason, ….just because. He does catch up to his attackers and in 3-force mode pays them back with a pure helping of hell and pain. 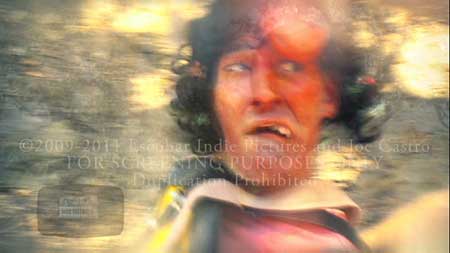 I was at first surprised at the title of the film. It struck me as “one of those” kind of titles thinking it should have been named something more “edgy”…like “Dismember the Planet” or “Rip my face off and eat my Innards”…well you would think? Though in this case, an over the top film displays a rather conservative title, setting you up for a shock. Title aside, the reviews on this alone should overshadow its bland packaging.

Moving on….. we encounter a he/she mongoloid named Laura. Despite living within an all-white-trash family, Laura is hated by her sister and on the brink of being medically quarantined. Laura survives a push over the cliff which turns her into a mad slasher herself. It’s more wacky dicing fun that cleverly switches the game on the underdog of the story.

What is unique to this film that even threw me for a loop (having experience as a film editor) was that the kills are so fast and so furious, you barely get a moment to see how it’s done. Though every one was this unique (and i do mean unique) way of combining really good practical effects with cgi edits and blood spray overlays. Now in review that might sound kind of quirky…well its equally quirky to experience, but a hell of a blast.

“The Summer of Massacre” works thru an anthology-style chain of events. Smaller violent stories make up the structure of the whole laced together thru convict dispositions. One of my more favorite of the group features a clown-faced murdering fat-ass psycho who has long tormented his family and everyone he comes into contact with. His rampage of rage has him running on mass murder spree despite half his face being shot into a mangled mess. Again we get much of that weird editing style that mashes practical FX with edited-on pieces that by editing standard are pretty impressive. Other tricks include cutout 2D sections interwoven with depth of field overlays and 2D camera perspective trickery. Though I’m gonna credit “Steven J. Escobar” with this piece of inclusion. In another act, a fellowship camping trip turns into a mass burning per forest demons that just destroy everything in sight. 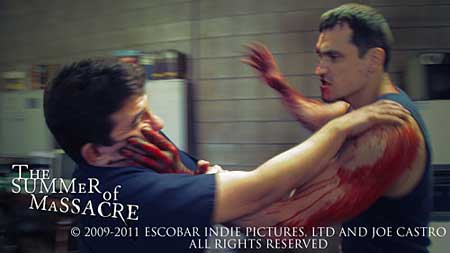 For readers, this movie is extreme for extreme sake. The film has already been documented as having broke the record for most kills on screen…the Guinness record and rightfully so, does so with passion. It’s truly nutty to watch and is the perfect visual feast for gore hounds worldwide. Should you whip this out during Christmas family time?…..um, not advised. It’s strangely underground, but masterfully executed. I have to lump this into a cult film category instantly out of the box for its rapid fire approach. As a culture and genre, its surely a ride to see how the next project tops the last. Joe has succeeded across the board, now grab your barf bag and close your blinds, It certainly is a “Summer of massacre”

If Hell had a movie night, “The Summer of Massacre” would be the star attraction.