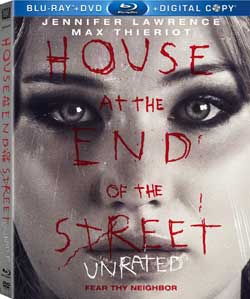 A mother and daughter move to a new town and find themselves living next door to a house where a young girl murdered her parents. When the daughter befriends the surviving son, she learns the story is far from over.

“House At The End Of The Street” (HATEOTS from now on) has a really generic 70’s grindhouse kind of title and I was thoroughly convinced it was going to be a turkey, giblets and all. But lo and behold! When it was over I found myself smiling like a kid who found Jessica Alba waiting for him under the tree on X-mas morning (OK, that kid would be me and finding La Alba under my tree would be kinda cool in a…forget I mentioned it). 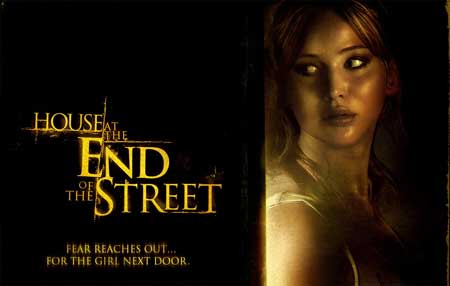 HATEOTS is about a divorced mom Sarah (Elizabeth Shue) & her 17 yr. old daughter, Elissa (Jennifer Lawrence) who are moving into a really nice house situated right on the edge of a national forest. The house closest to them is apparently abandoned & has a bit of a sad history attached to it. Four years earlier the adults who lived in the house were brutally murdered by their daughter who then escaped into the forest, never to be seen again. It’s believed that she drowned in the nearby river during her escape but some believe that she is still alive, living in the woods & waiting for an opportunity to strike again. Unbeknownst to the newest family in the neighborhood her older brother (Who was not there when the tragedy occurred) has been living in the home for awhile, working on his writing while attending a community college nearby. 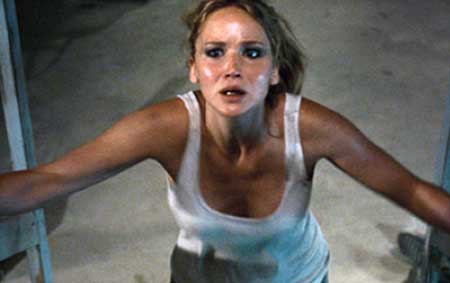 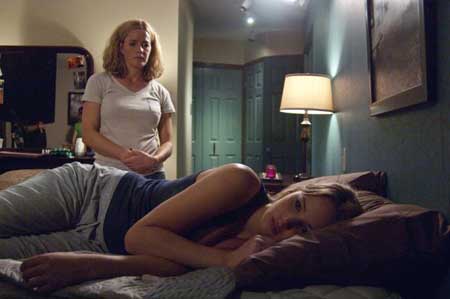 Sarah & Elissa are warned not to go near the house but eventually Elissa meets the young man, Ryan (Max Thieriot) and decides that he isn’t too bad a sort. Eventually a relationship develops between the two against the wishes of Sarah and just about everyone in town save for officer Weaver (Gil Bellows) who has a soft spot for Ryan & tries to protect him from the local bullies who are constantly harassing him & damaging his property. But Ryan, despite his declaration that he believes his sister drowned, harbors a secret below his house. And he’ll do anything to keep it that way…a secret.

HATEOTS begins with a sequence showing us exactly what happened on that fateful evening when Carrie Anne (Eva Link) got out of bed on a rainy night, lured her mother out of her bedroom and brutally murdered her. Her father (awake but still in bed), hears sounds just outside the bedroom door & a few seconds tick by before Carrie Anne bursts through the door and murders him as well. Carrie Anne then runs out of the house, headed towards who knows where in the rain, still in her nightgown…never to be seen again. Director Mark Tonderai (Hush) makes the most of the eerie silence afforded by the location, a house in the middle of a forest, the steady patter of raindrops against the windows & Carrie Anne’s stealthy approach towards her parents bedroom. The tension is fairly nerve wracking & more than a few of the members of the audience I saw it with were screaming at the top of their lungs at the end of the sequence (including the young lady sitting directly to my right who was near frantic with fear throughout the film). Carrie Anne’s explosion through the bedroom door is indeed the stuff that nightmares are made of. 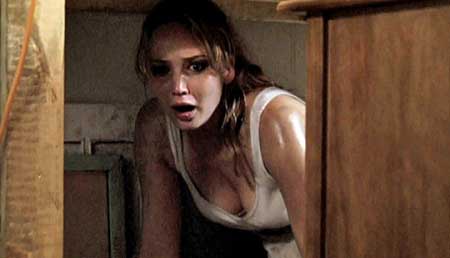 But is she really gone? To continue any further would be spoiling the film for you but I will say that as the movie continues there are some pretty wild plot twists that kept me on my toes as I wondered where David Loucka’s (Dream House) script was headed. Based on a story by Jonathan Mostow (Surrogates, Terminator 3; Rise Of The Machines) the script isn’t perfect and there are some plot holes that could’ve been avoided but it is lean & mean and takes some time to let the audience get to know all of the principals as it sets up it’s story which is always appreciated. When an audience cares about the characters in a film it makes them emotionally invested in their fates which in turn gets louder screams from the audience if/when something really bad happens to them. Needless to say, bad things happen to some of the characters in HATEOTS. 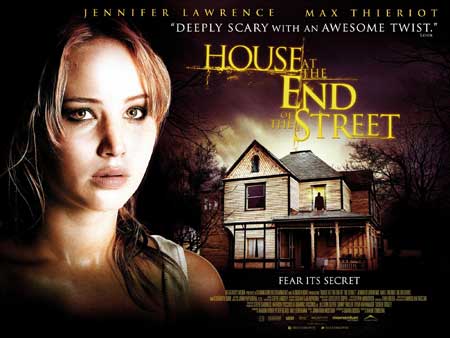 Jennifer Lawrence (The Hunger Games) made this film right after her breakthrough (& Oscar nominated) turn in “Winters Bone” and before she was cast in “Hunger Games” so she was still something of an unknown despite her nomination (How many of you have even SEEN “Winters Bone”? I have and it’s a great film). She underplays the role of Elissa, perhaps to mimic the uncertainty that a 17 yr. old girl faces when put in a situation like she’s in. A taut relationship with her mother, a new neighborhood, new friends and a strange neighbor that she knows she shouldn’t be attracted to but is anyway make for a troubled teen. She underplays the role wonderfully and garners a lot of sympathy from the audience. Elizabeth Shue (Leaving Las Vegas, Pirahna 3DD) does a good job playing Sarah who is trying to be a better mother to her daughter despite her obvious disdain for her ex-husband who Elissa still adores. There are a few scenes between the two in which the tension between the both of them is as thick as pudding and both actresses do a great job of letting their faces express their seething anger towards each other when discussing their relationship, Yet there is an obvious love that they share for each as well.

As Ryan, Max Theriot (My Soul To Take) has a near angelic face and essays an aura of such innocence that it’s not that hard to see why Elissa would fall for him. He too underplays his role but there’s a method to his madness and as the film progresses and his character’s motivations turn he never turns off that innocence and that makes his character’s arc that much more satisfying. All other roles are played as well as they could be, stereotypical as they are. I thought Gil Bellows played officer Weaver a little too cloyingly but I guess that’s the way the part was written, I’m just a little tired of the police officer with a heart of gold role since (much like the “Red Shirts” in every Star Trek episode) I just know that he’s a goner. 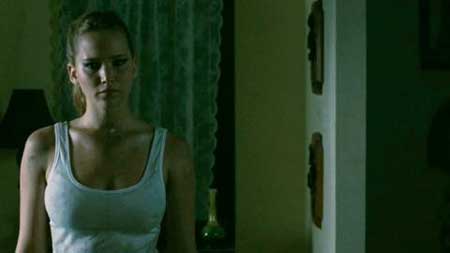 There are echoes of 80’s slasher films here as well. Not in terms of bloodshed (of which there is very little) or of over the top violence (ditto) but HATEOTS is similar to landmark slashers like “Halloween” & “The Prowler” pacing wise. It moves at a nice clip and offers up either a plot twist or murder every 10 minutes or so which feels just about right and is paramount in keeping the audience in it’s grasp. It also brings back the “Invincible Killer” idea that John Carpenter’s Michael Myers is the best example of. When you see it you’ll know what I mean, it’s a bit ludicrous but it’s still effective and scary. That’s all that really matters, isn’t it? Realism be damned!!

All in all I found “House At The End Of The Street” to be a pretty good thriller that garners it’s screams through pacing & suspense, not through over the top bloodshed. It doesn’t rely on the standard tropes that are expected of thrillers although it does use a few of them to it’s advantage. It’s been ages since I’ve sat in a theater and heard the audience yelling at the characters on screen (“Walk Away” got a lot of laughs when it was yelled out. Again, you’ll understand when you see the movie) and I enjoyed the response the film got from the audience. It felt exhilarating & refreshing to me and the audience wasn’t yelling at the screen in derision, they were really into what was going on and let their feelings be known. 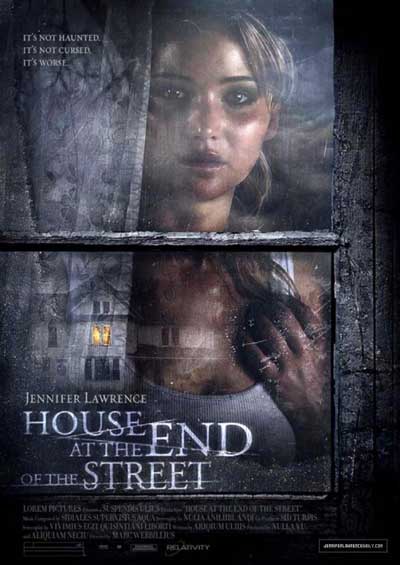 The film opened today (9/21) yet not only was it not reviewed in my local newspaper but it didn’t even warrant an ad announcing it’s opening in the paper either which means that the studio doesn’t have any faith in the film and just wants to make a quick buck on it before any negative word of mouth regarding it might get out. I think that’s a shame especially since it’s a good movie that deserves better than it’s getting. It’s no “Halloween” or “Psycho” but it is an effectively creepy movie that works hard to earn it’s frights and succeeds completely! See it before it disappears and sadly it looks like that may be soon… 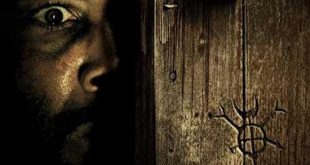