DEXTER To Slay For At Least Two More Years 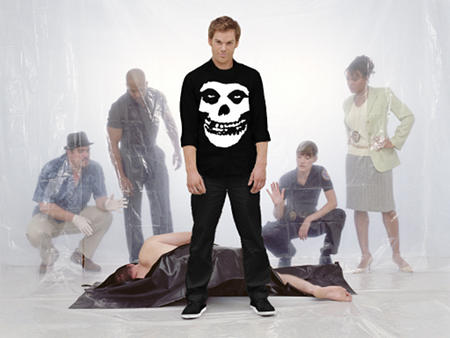 Okay all you DEXTER fans, go ahead and exhale! After weeks of wondering and worrying if this year would be the last the fine folks over at Showtime have confirmed that Michael C. Hall and the rest of the crew will return for at least two more seasons of blood splattered fun.

Here’s what the press release had to say:

SHOWTIME has ordered two more seasons of its award-winning, top-rated drama series DEXTER, starring Golden Globe award-winning actor Michael C. Hall, it was announced today by David Nevins, President of Entertainment, Showtime Networks Inc. On the heels of Hall and SHOWTIME closing a new, two season deal for Hall to return to the series, production will begin on season seven in 2012 in Los Angeles. Seasons seven and eight will consist of 12 episodes each.

The Emmy nominated DEXTER opened its sixth season in October and continues to earn impressive ratings, most recently delivering its fifth consecutive week of growth. Season-to-date, the series is averaging 5.12 million weekly viewers on all platforms (including On Demand, replays and DVR), making it the highest rated season yet. Season six of DEXTER is executive produced by John Goldwyn, Sara Colleton, Scott Buck, Manny Coto and Michael C. Hall.